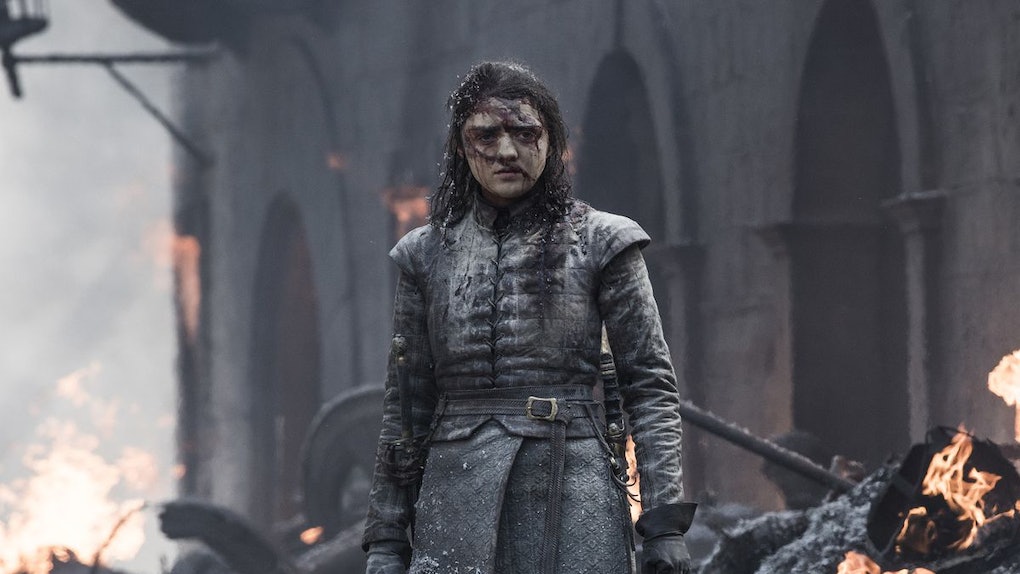 Will Arya Kill Grey Worm In The 'Game Of Thrones' Finale? Fans Have A Convincing Theory

This is it. After eight long seasons, fans have finally reached the end of Game of Thrones, with only one episode left to provide satisfying conclusions to all the stories of the whole series. And while a lot of loose threads were tied up in the penultimate Season 8, Episode 5, the fates of a lot of main characters are up in the air as the finale fast approaches. Warning; Spoilers for Season 8 of Game of Thrones follow. In Game of Thrones Season 8, Episode 5, it seemed like Arya Stark had given up the life of an assassin for good. But, some fans believe that murder is not necessarily out of the question for her in the last episode. In fact, some believe that Arya will kill Grey Worm in the Game of Thrones finale, and the theory honestly makes a lot of sense.

Season 8, Episode 5, titled "The Bells," ends with King's Landing in ruins after Daenerys chooses to ignore those eponymous bells of surrender and unleash dragon's fire on the city. It was a move that solidified her new place as The Mad Queen, since it has her following in the footsteps of her father The Mad King, who also burned people alive. But, with such tyrannical tactics, it seems pretty clear that Daenerys is not fit to rule and that one of the more moral characters is going to step in to stop her.

Reddit user hoowuurd has a theory that Arya will be the one to take down Daenerys, but with a quick pit stop killing Grey Worm first. Arya still has the ability to become anybody she wants to by killing them and wearing their face like a mask. It's magic that she learned from Jaqen H'ghar in Braavos, and even though Arya never became a Faceless Man, she still has the ability to use those powers. So, it's possible that Aryan might kill Grey Worm and use his face to get close to Daenerys, since he is her closest advisor. Once Arya-as-Grey Worm is in close proximity to Daenerys, she can go in for the final kill. On Reddit, hoowuurd expands upon the theory:

The obvious problem is getting close to Dany as well as killing her without it being frowned upon by the realm. This will lead to Arya killing Grey Worm. He’s been chaotic, plus he’s Dany’s right hand and slightly starting to go crazy after he lost his love. Arya will use Grey Worms face to kill Dany, and set it up to look as if either Grey Worm killed Dany and then himself, or just flee the scene and leave it a mystery to the realm.

After Daenerys began burning King's Landing, Grey Worm made the first kill on the ground, leading to a free-for-all fight among the soldiers. Since he's arguably gone just as mad as Daenerys, it might make sense for Arya to take him down on her way to Daenerys, so she can eliminate as much of the chaos in King's Landing as possible.

Then again, at the end of Season 8, Episode 5 Arya seems to be headed out of King's Landing on a white horse, so maybe she truly is done with her murderous obsession. Fans will just have to wait to find out when the series finale of Game of Thrones airs Sunday, May 19 at 9 P.M. ET on HBO.

More like this
This 2021 'Game Of Thrones' Season 8 Trailer Is So Confusing... & So Good
By Ani Bundel
10 Questions The ‘Schitt’s Creek’ Finale Left Unanswered
By Rachel Varina
This TikTok Theory About Eric From 'Boy Meets World' Will Blow Your Mind
By Rachel Varina
Stay up to date