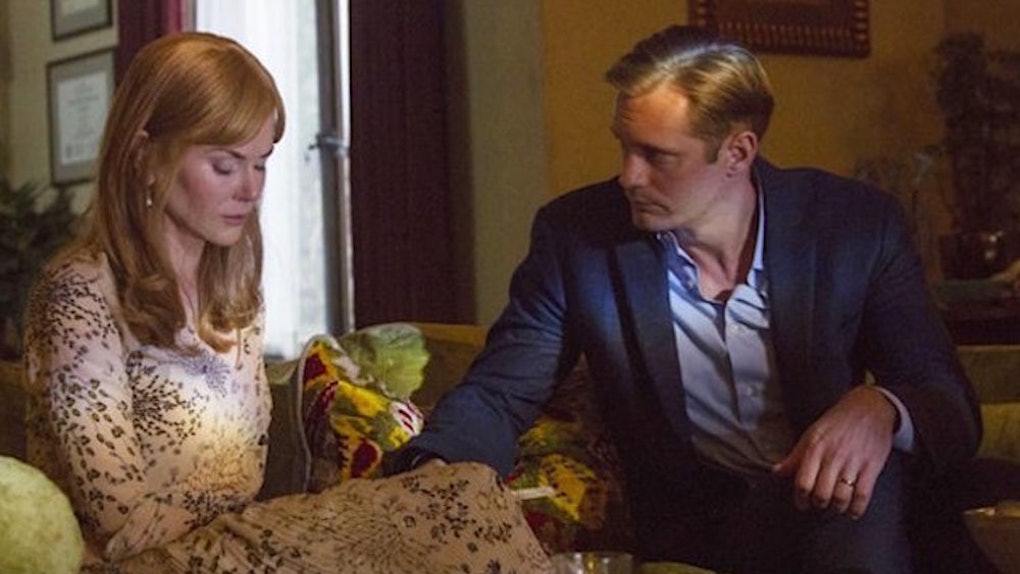 Will Alexander Skarsgård Be In 'Big Little Lies' Season 2? Here's What We Know

Big Little Lies' epic conclusion was generally considered to be one of the most satisfying TV finales in recent memory. Even though audiences were fulfilled by the show's ending, a second season is what they all wanted, so a second season is what they will get. Spoilers ahead for Season 1 of Big Little Lies, so don't say we didn't warn you. But what do more chapters in this story mean for the characters, especially one who is supposedly no more? Will Alexander Skarsgård be in Big Little Lies Season 2? It's looking like there's a chance he'll make an appearance.

According to a report by TVLine, Perry Wright (Skarsgård) "is expected to return in some capacity." While the abusive husband of Nicole Kidman's Celeste may have been killed off in the first season, perhaps he'll be featured in flashbacks that will fill even more blanks about him and his family's past. Or there's that slim chance that's he's (gasp!) not really dead. Unlikely, considering we don't think BLL would employ the whole hokey "he's alive!" angle, but Skarsgård himself has deemed it a possibility. Though, he could totally be trolling everyone. "I don’t even know if I’m really dead or not. I feel okay right now but we’ll see,” the actor told People.

The recent announcement of a new character connected to Skarsgård is also raising more questions about how he'll be involved moving forward. If you haven't heard, the iconic Meryl Streep is joining the cast of Big Little Lies for its next installment. The record-breaking Oscar nod is set to head to Monterey in the role of Perry Wright's (Alexander Skarsgård) mother, Mary Louise. We're guessing her presence will shake things up in one way or another — you don't give Meryl Streep a part that lacks depth and significance, do you? We smell Emmy already...

Naturally, the original cast could not be more pumped to welcome Streep to their already esteemed group. "Well, now my acting dream has come true," Laura Dern wrote on Instagram.

Even if Alexander Skarsgård's role in Season 2 is limited, his work in Season 1 certainly didn't go unnoticed. The actor won a Golden Globe, Critic's Choice, Emmy, and SAG Award for his work. "A lot of people have been talking about who the greatest male actor is. Is it Mr. Robert De Niro or the tall dude from True Blood? The thespians have spoken..." he joked during his SAG Awards acceptance speech, adding that he is "incredibly embarrassed and infinitely grateful."

Seriously, what performer would pass up on being a part of this Big Little Lies family? "I get calls about actors, some of them quite well known, who say, ‘If there's anything in Big Little Lies,' ‘cause I think they also saw we had a lot of fun as a group together and people kind of want to come to that party, which I think is really great," the series executive producer Bruna Papandrea told E! News.

Nicole Kidman and Reese Witherspoon are signed on to return for the second season, and the rest of the cast is expected to make a return to the HBO hit. Andrea Arnold will take on the role of director in place of Season 1's Jean-Marc Vallée, although he will continue to executive produce. In addition to Streep, more fresh blood will be introduced to the series, including Bonnie's (Zoe Kravitz) parents, a new teacher at Otter Bay Elementary, and an administrator who strikes up a friendship with Jane (Shailene Woodley.) The next seven episodes will not air until 2019, which gives us all more than enough time to drive ourselves mad speculating about what's to come. With Meryl Streep on board, we already have a good feeling about it.

More like this
Here's How To Vote For The Next 'American Horror Story' Theme Among 6 Options
By Cianna Garrison
This Reported Update About HBO Max's 2021 'Friends' Reunion Is Great News
By Cianna Garrison
These Tweets About Jimmy Fallon's TikTok Dance Follow-Up Segment All Say It's Too Little, Too Late
By Brandy Robidoux
Stay up to date