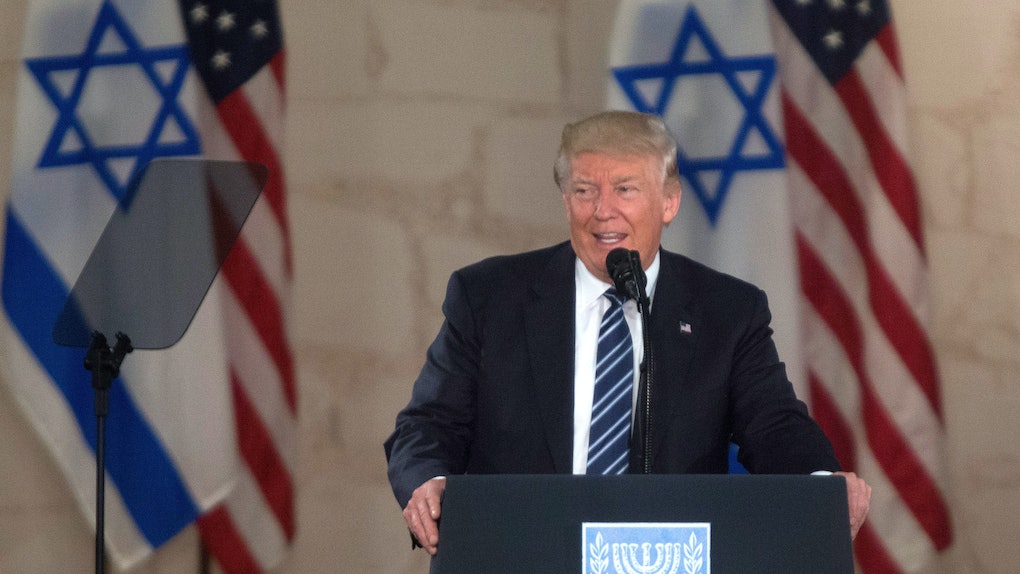 Why Is Trump Moving The Embassy To Jerusalem? It Would Be A Major Policy Change

“Peace in the Middle East” might be a hyper-politicized catchphrase, but the reality behind it is even worse. And Donald Trump might be about to throw a giant monkey wrench into the works, after it was reported on Dec. 5 that the president planned to move the U.S. embassy in Israel from its current location in Tel Aviv to the city of Jerusalem. But why is Trump moving the embassy to Jerusalem?

The New York Times reported on Tuesday that the president intends to fulfill a campaign promise by moving the U.S. embassy in Israel from Tel Aviv to the disputed city of Jerusalem, in a major change to U.S. policy in the Middle East. The process is likely to take several years, officials said. More importantly? Trump is expected to announce the formal recognition of Jerusalem as the Israeli capital. But why is this such a big deal?

Basically, the city of Jerusalem has long been disputed territory in the Israel/Palestine conflict, which has been going on for decades as mostly-Jewish Israelis and mostly-Muslim Palestinians fight over the same stretches of land in the Middle East. At the heart of the conflict is the city of Jerusalem — a holy site in both Jewish and Muslim culture. Both the Israelis and the Palestinians have long wanted to make Jerusalem their respective capitals, and the city sits on the border of the acknowledged territory of Israel and the primarily-Palestinian West Bank territory, which the CIA denotes as "Israeli-occupied." As a compromise, the international community, including the United States, has mostly avoided acknowledging the problem of Jerusalem, refusing to recognize it as a capital as a way to avoid aggravating the conflict.

Trump's move is fulfilling a campaign promise — on the 2016 campaign trail, Trump promised that he would move the U.S. embassy in Israel to Jerusalem, calling the city the "eternal capital of the Jewish people" in a speech to the American Israel Public Affairs Committee in March of 2016. "The Palestinians must come to the table knowing that the bond between the United States and Israel is absolutely, totally unbreakable," he said at the time.

And Trump may be more devoted to fulfilling campaign promises at the moment. According to CNN, Trump is "increasingly worried about losing his political base," and thinks that fulfilling promises on Israel will reaffirm his support among conservatives. Technically speaking, the embassy's move to Israel has been in the works since 1995's Jerusalem Embassy Act, but for the past two decades presidents have signed waivers every six months delaying the move on national security grounds, in order to avoid upsetting the political situation.

Some are already concerned that Trump's move now could be undermining attempts at negotiating peace in the region. According to the Times, Arab leaders warned Trump that the move could disrupt peace efforts, and might even unleash "a new wave of violence" across the region. King Salman of Saudi Arabia reportedly told Trump that moving the embassy was "a dangerous step that provokes the feelings of Muslims around the world."

Other experts also had raised eyebrows. David Makovsky, director of the Project on the Middle East Peace Process at the Washington Institute for Near East Policy, told CNN that the move would be bad for any peace efforts. "If you say you recognize an undivided capital, you've pre-empted peace negotiations," he said.

Palestinian and Islamic leaders responded as well — a joint statement from Palestinian national and Islamic groups called for three days of "popular anger," and called on supporters to protest in "city centers and Israeli embassies and consulates," according to The Jerusalem Post. The statement continued,

[A] huge protest should be launched in order to reject out of hand the attempts of the US administration to transfer the embassy from Tel Aviv to Jerusalem or recognize Jerusalem as the capital of the State of Israel.

The State Department is apparently worried about it — according to CNN, security services were instructed to prepare for "unrest" as overseas missions, and troops protecting embassies were moved closer to areas where protests might occur.

Trump is expected to make a formal announcement on Wednesday. What will happen from there is anyone's guess.