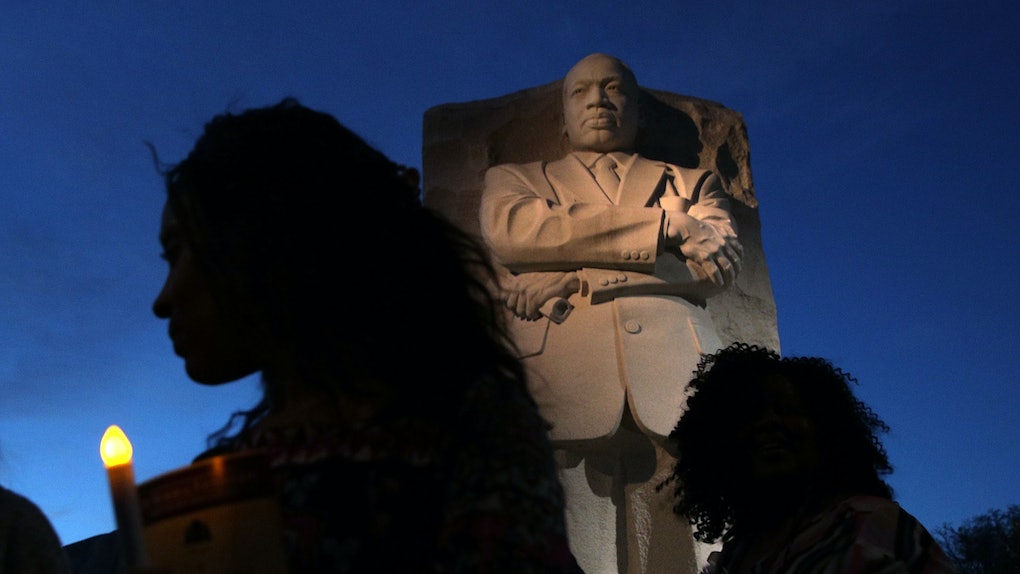 Why Is Martin Luther King Day Celebrated In January? Here's How It Became Law In The '80s

On Monday, Jan. 15, Martin Luther King Day will be nationally recognized for the 32nd time in American history. Despite the day's significance — it's only one of eleven federal holidays — the details of how the holiday came to be aren't exactly well known. But the history behind answers to questions like why Martin Luther King Day is celebrated in January are easy to track.

The creation of a nationally recognized holiday for Dr. Martin Luther King Jr. was sealed in 1983, when former President Ronald Reagan signed a bill. Former Representative Katie Hall (D-IN) introduced a bill that eventually passed the House of Representatives by an overwhelming majority.

The holiday is celebrated on the third Monday of each January to fall as close as possible to King's actual birthday, Jan. 15 (which the holiday just happens to fall on this year).

Despite the fact that the bill that led to the holiday's creation passed both chambers of Congress with overwhelming support (at least during the final vote), the effort to grant a holiday in memory of Dr. King was far from an issue that didn't have controversy.

There were different members of Congress, for starters, who cited a variety of reasons to oppose the holiday.

Consider former Rep. Bill Goodling (R-PA), for example. In 1983, the Republican wrote a letter to the editor that was published in The New York Times' opinion section, and cited the cost of a new federal holiday as a reason to oppose it.

At the heart of his argument? The $18 million the government would have to pay employees to fund a new day off. Here's what he had to say:

The real issue is the holiday's cost to the nation. Now the Federal Government will spend $18 million a year to give its employees a day off, leaving the taxpayers with an even larger deficit. I voted against this measure when it was before the House, not because I am a Republican and not because I do not care about civil rights and black votes. I vote against all spending measures that are a threat to the nation's economy because I promised my constitutents I would do so.

Then there was Senator Jesse Helms (R-NC), who filibustered against the bill that would create MLK day and argued that King shouldn't be celebrated with a nationally recognized day because, Helms said, he was a communist.

"I think most Americans would feel that the participation of Marxists in the planning and direction of any movement taints that movement at the outset," the senator said during his filibuster, per The Washington Post's records. "And Dr. King's action-oriented Marxism, about which he was cautioned by the leaders of this country, including the president at that time, is not compatible with the concepts of this country"

The idea that Dr. King was a communist indeed became part of the debate, a part which former President Reagan was asked about. During one news conference, when asked by a reporter whether he agreed with former Sen. Helms, Reagan replied "Well, we'll know in about 35 years, won't we?"

The answer was an allusion to the fact that FBI files related to Dr. King weren't (at the time) set to be released for decades. Reagan would eventually call Coretta Scott King (Dr. King's widow) to apologize and clarify that he meant no offense.

Even when Reagan signed the bill that led to Martin Luther King Day being recognized nationally, not everyone followed suit completely. In 1990, the NFL removed the hosting duties for the 1993 Super Bowl away from Arizona because it had not recognized the day.

Even in 2000, there were still disputes over whether Martin Luther King Day should be recognized. In Connecticut, for instance, former Gov. John Rowland signed legislation to ensure all municipalities recognized the holiday.

Now, however, such disputes are generally unheard of, but they're undoubtedly part of the history of how Martin Luther King Day came to be.