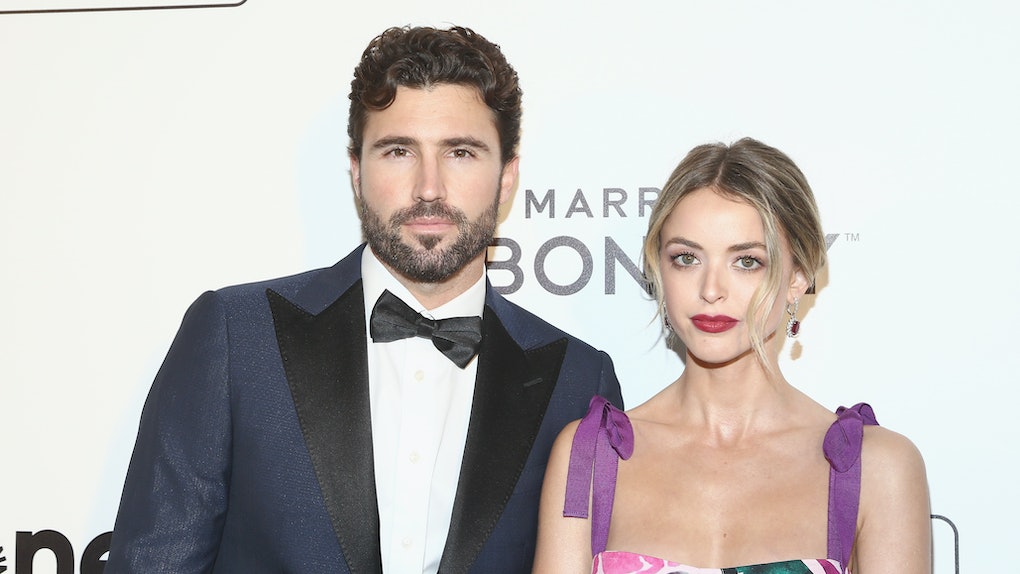 Why Didn't Kaitlynn Carter & Brody Jenner Get Legally Married? They Got Real On 'The Hills'

Brody Jenner and Kaitlynn Carter's marriage was complicated. The two were together for five years before getting married in Indonesia in June 2018, but their marriage is now over and Carter has seemingly struck up a romance with Miley Cyrus. Their breakup, from a legal standpoint, was pretty easy, though, considering the fact that they didn't get legally married in the States. That makes a divorce pretty quick! So why didn't Kaitlynn Carter and Brody Jenner get married legally? The season finale of The Hills: New Beginnings made things as clear as they're probably ever going to get for anyone who's not Carter and Jenner themselves.

The quick answer is they just didn't find the time. In the show's finale on Sept. 9, Spencer Pratt pressed Jenner about his relationship with Carter. (This episode, of course, was filmed while Jenner and Carter were still together.)

"I just feel like you’re living two different lives," Pratt said. Then he brought up the fact that he and Heidi Pratt got married in another country, but still made sure the marriage was legal in the U.S. Jenner basically responded saying he and Carter felt married, so the legality of it wasn't as pressing to them.

"There's a lot of legality involved," Jenner said. "I mean, I don't believe in the whole signing part of it, but everything else, I'm with it. We're fine with the way our marriage is set up, just perfectly so, but thank you for your concern."

Carter was pressed about her marriage with Jenner as well. Ashley Wahler asked Carter a bunch of questions about Carter wanting kids, and the apparent rumors that Jenner had slept with other women. Later in the episode, Jenner and Carter nearly left a group gathering when Wahler continued to press them about their relationship, but then came more talk about the legality of their marriage.

In a solo interview, Carter explained why she and Jenner didn't legally get married.

"Right before we went to Indonesia to get married, we started talking about getting our license here in the States, but we had a lot of like financial things that we needed to work out," Carter said. "We realized like, you know, we just want to focus on being excited about Indonesia and our wedding there, so let’s just deal with it when we get back. But we haven’t gotten around to it yet."

In another talk with Pratt later in the episode, Jenner echoed Carter's statement.

"It was never something that was even a big deal that I felt like I needed to share," he said." It was literally, we met with attorneys and sh*t two weeks before we left for Indonesia. Then we got married in Indonesia and ever since then, we’ve been incredibly busy."

"We just haven’t gotten around to doing the whole courthouse or however we’re going to decide to get legally married," Jenner continued. "My number one priority is making her happy and making her feel comfortable. And if she’s uncomfortable, then I’m uncomfortable. So like I said, whether you put it on a piece of paper or have just a celebration in Indonesia, we’re married and she’s my wife, and I love her to death."

Perhaps the juiciest reveal of the episode was when Carter responded to the prying questions about her and Jenner's sex life. She said Jenner did have sex with other women, but "not without me being involved, OK?" Oh. My. God. We stan a sexually open dynamic!!

"Everything with me and Brody is under my control, let’s put it that way," Carter added.

In a solo interview, Carter said she wouldn't change anything about how their marriage works.

"There’s not one part of our relationship that I’m ashamed of or that I would do differently," she said. "I just think that the world isn’t necessarily ready to hear about all that. Not everybody is so open-minded or accepting of other people."

Ugh, that's unfortunately true. It seems like Jenner and Carter had a good foundation of communication between them. I mean, if they were opening their relationship to having sex with other people, there had to have been some solid communication there. With a dynamic like that, I wonder what lead to them calling it quits? Whatever the reason, I bet they're glad to not be drowning in legal fees from a divorce.

More like this
Kaitlyn Bristowe & Jason Tartick Are Engaged & Their Proposal Story Is Cute AF
By Rachel Varina
Are Jennifer Lopez & Ben Affleck Getting Back Together? A Reported Reunion Has Fans Buzzing
By Cianna Garrison
Katie Thurston's Ex Joked About Her 'Bachelor' Entrance In His Stand-Up Act
By Corinne Sullivan
Stay up to date