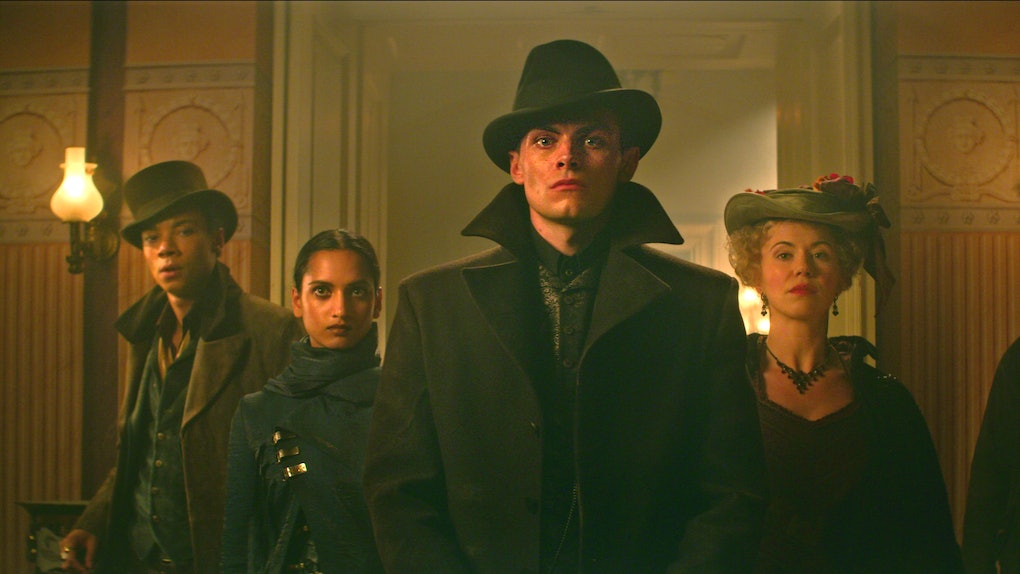 Why Are The 'Six Of Crows' Characters In Netflix's 'Shadow & Bone'? Here's The Deal

There are some shows that, even before they arrive on Netflix, audiences are already super pumped about. Big-budget adaptations like The Witcher and Bridgerton come with a built-in fan base from the novels, and Netflix creates a series to match their expectations. The latest in this group of titles is Shadow & Bone, based on the Grisha trilogy by Leigh Bardugo. But there's one thing fans of the novels might be perplexed by, and that's the Season 1 cast list. So, why are the Six Of Crows characters in Netflix's Shadow & Bone? Let's break down how the Grisha-verse books are structured.

Shadow & Bone, Bardugo's first full-length novel, is part of a trilogy, followed by Siege & Storm and Ruin & Rising. But this is only the tip of the Grishaverse. There are nine full-length novels all told, including a pair of two-book series, the Six of Crows duology and the Nikolai duology. These three separate series aren't just different stories; they're entirely different genres.

That makes the Grishaverse different from other book series. Bridgerton, for instance, is part of an extensive collection of Julia Quinn stories, all of which exist in the same Regency world. But they're all historical romances. The Witcher goes from short stories to novels to video games, but all are monster-fighting fantasies.

In this case, the Shadow & Bone trilogy is a YA dystopian romance (like The Hunger Games), starring a chosen one, Alina Starkov, who discovers her powers could save the world. But Six Of Crows is nothing like that. It's an action-adventure thriller, straight out of Mission: Impossible, with a gang of ultra-talented thieves and assassins led by teenage criminal prodigy Kaz Brekker. It takes place in an entirely different kingdom than Shadow & Bone — Kerch's capital city of Ketterdam, instead of the Shadow Fold plagued-lands of Ravka. It also takes place years after the original trilogy; Alina's story gets referenced in passing as part of some political troubles from a few years back. These stories do not connect at all, except that they share a universe.

Moreover, no one from the Six of Crows novels run into anyone from Shadow & Bone until much later, in the Nikolai books. So how do these two wildly disparate tales fit together in one show? According to Netflix's Shadow & Bone showrunner Eric Heisserer (best known for the film Arrival), the series created prequel tales for the Six of Crows gang that echo Shadow & Bone's overall story.

Speaking to Collider, Heisserer explained, "The way that Six of Crows is built in that you do get into backstories that are outside of the current timeline. And so we touch on some of that for a few of the characters, and for others, it's brand new."

Heisserer also said combining the books' genres was why he was so excited to make the series. "I love both for different reasons, and they live in the same world. I think if you just do one, you're getting a smaller slice of your audience."

By mixing the two stories, Heisserer also gets to explore a wider variety of viewpoints. The Shadow & Bone book is told only from Alina's POV and is your typical cishet white girl fantasy. Six of Crows not only features a diverse group from all walks of the Grishaverse but has LGBTQ+ characters as well.

More like this
Netflix's 'The Circle' Season 2: Release Date, Cast, Trailer, & More Info
By Ani Bundel
Who Is Cleo On 'Outer Banks'? Carlacia Grant Is New To Season 2
By Ani Bundel
Shonda Rhimes' Quote About Regé-Jean Page Leaving 'Bridgerton' Is SO Shonda
By Rachel Varina
Stay up to date