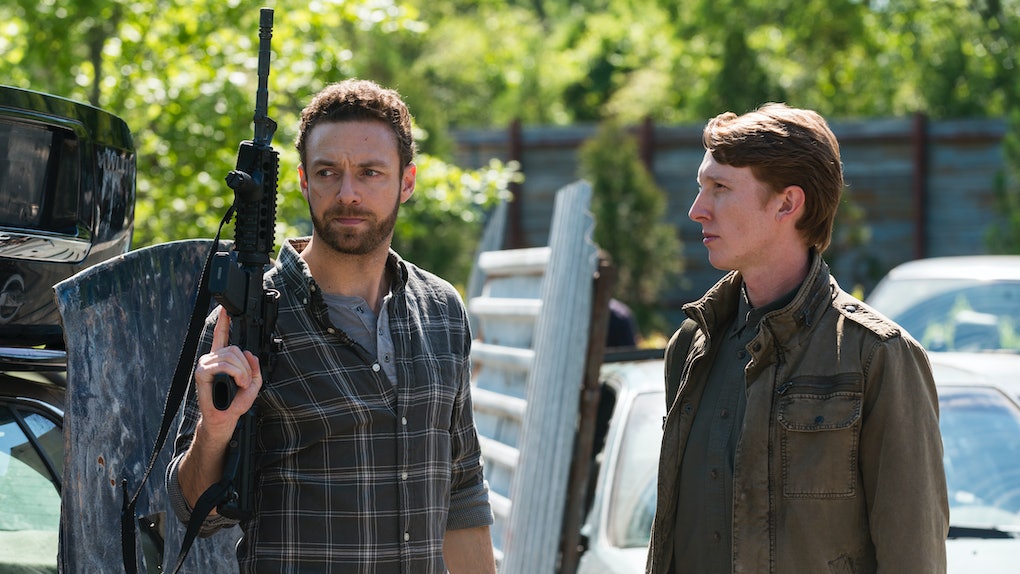 The Walking Dead opened tonight with a long set of speeches by the new leaders of the three joint communities of the The Militia: Alexandria, Hilltop Community, and The Kingdom. There were a whole lot of pretty words about joining together, about expanding their horizons, about building an bigger and better community, especially from Rick Grimes. But all that seemed pretty short lived, once a new guy wandered by. Who is Abbud on The Walking Dead?And where the heck did he come from?

It's only a short scene later after Rick was saying all this, about how those who want to join together will be welcome, that he was firing right over the head of poor Abbud. Abbud, before he ran in terror, introduced himself as a young Muslim man. Well, introduced might not be the right word. Rambled in incoherent terror from behind a pile of junkyard cars at a gas station was a bit more accurate.

One of the more striking things about those who've been on their own out in the zombiefied world of The Walking Dead is that the longer the show goes on, the madder they seem to have gone.

Abbud is a great example of this. He quotes the Quran without a second thought, and then immediately follows it up with "I shouldn't have said that," a reflexive response to the racism he's experienced on top of the zombie insanity.

As for what he was trying to do by talking with Carl, it seemed mostly like he was just desperately hungry for food, and for the sound of another human voice.

Yet, despite the obvious pathos of this young man and his plight, Rick shot at him. He insists to Carl, who is clearly not pleased by this, "it was over his head" but that's not the point. The point is, if you're going around speechifying about bringing in those who will help grow the community, shooting over the heads of people when you meet them is not the best way to go about it. Shoot the zombies instead please.

Carl is at least a man who is walking the walk that Rick talks. He returns to the gas station towards the end of the episode and leaves cans of food along with a one word note:

The good news is Abbud hasn't died in the time between Rick's shooting at him and Carl's turn. He's still there, haunting that gas station, staring out in terror from the tall grasses, watching as Carl leaves the cans and the note.

The bad news is that the sort of mental instability that Abbud is exhibiting doesn't bode well for a long and happy life. Even if the world that Rick, Ezekiel and Maggie are building does decide that he's not a spy for the Sanctuary. (Or that he's not "one of them" aka a Negan "burn the world" type.)

Even if they bring him in and give him food and shelter, he's been on his own in this post apocalyptic world for far too long. He's a shattered shell of a man, one that it will take a whole lot of work to put back together if there's any hope of long term survival.

We wouldn't hope too hard though. Though these sorts of things can change at any time, word has it that the part of Abbud isn't the one that's got the possibility of renewal for the assumed-to-soon-be-greenlit The Walking Dead Season 9.

That's too bad. This is a guy who spent too long out there in the world alone. Let's hope that if he does come to a bad end before the end of Season 8, he finds home and some peace.