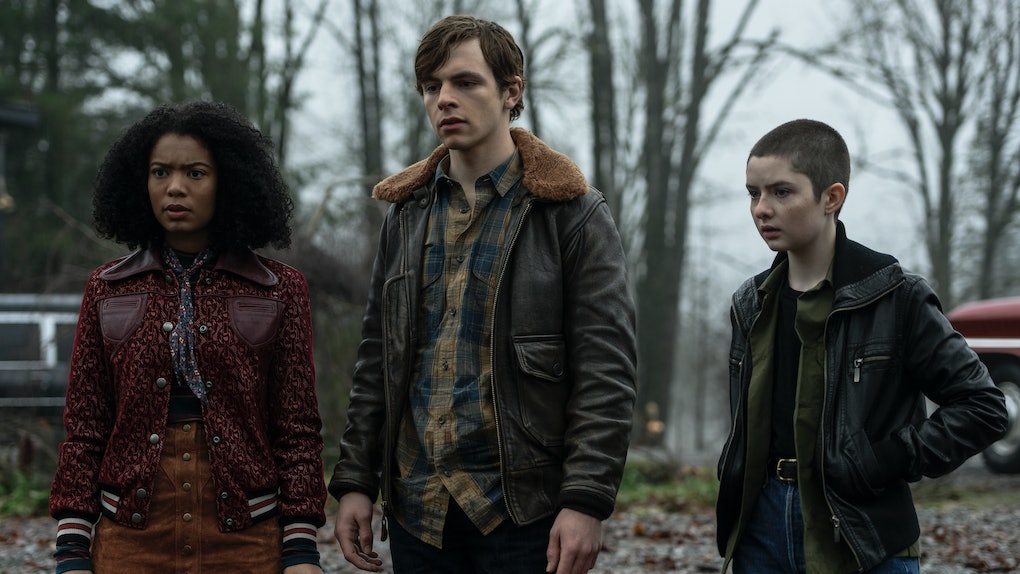 Who's The Woman In White In 'Chilling Adventures Of Sabrina'? There's A Connection To Harvey

This season has been a difficult one for Sabrina and her friends. Like most teenagers, changes are happening in their lives, sometimes rapidly, and with Sabrina off at the Academy of Unseen Arts, there's a been a natural growing apart of the foursome. However, when Sabrina got expelled from the Academy for attempting to accuse Father Blackwood of killing her father, it turned into an opportunity to rekindle her friendships, especially once she manifested disturbingly strong powers after the Order of the Innocents attacked her school.

Sabrina healing Roz's eyes, returning her sight, was a turning point, and she, Roz, Harvey, and Theo were back on as friends. But Sabrina's concern for her mortal friends might once again become a liability, as Harvey discovers a tunnel down in the mines where a woman's voice calls out to him.

Last season, Harvey's fear of the mines mostly kept him safe, but with his brother gone, and images of Sabrina's transformation dancing in his head, he figures some physical labor might help. Instead, he finds himself drawn to the female voice that seems to be emanating from the closed-off tunnel. Luckily, Harvey's father, perhaps not wanting to lose another son, keeps a sharp eye on the kid and pulls him back.

Harvey isn't about to let the mystery go. Tunnel 13 isn't on the mine maps, a fact he finds puzzling. It turns out he has to go back over a hundred years, to 1910 when the mine first opened, to find any reference to it.

In his great-grandfather's diary, there are references to Tunnel 13, and miners hearing a voice from deep inside, with reports of glimpsing "a woman in white" inside that tunnel.

The 1900s, especially the pre-world war era, was a time when the "Woman in White" myth ran rampant. The Wilkie Collins novel, published in the mid-1800s, had become a popular read in the US by then, and reports of seeing a ghost described in those terms was a regular occurrence in rural areas.

The tales of the ghost drive Harvey to seek out the tunnel and, with Theo's help, open it up. There's no "Woman in White" inside though. Instead, they find a far more terrifying mosaic, thousands of years old, with Sabrina Spellman's face in the center.

Upon seeing it, Sabrina fears the worst. She thought she could use her powers for good, but the image of her looking for all the world like the Herald of Hell, could be proof she is very wrong.

More like this
Joshua Bassett Almost Played Harvey In 'Chilling Adventures Of Sabrina' & I'm Shook
By Dylan Kickham
Netflix Renewed 'Bridgerton' For Seasons 3 & 4, Likely With More To Come
By Ani Bundel
These Fake 'Riverdale' Brand Names Are Even Better Than The Real Thing
By Rachel Varina
Stay up to date