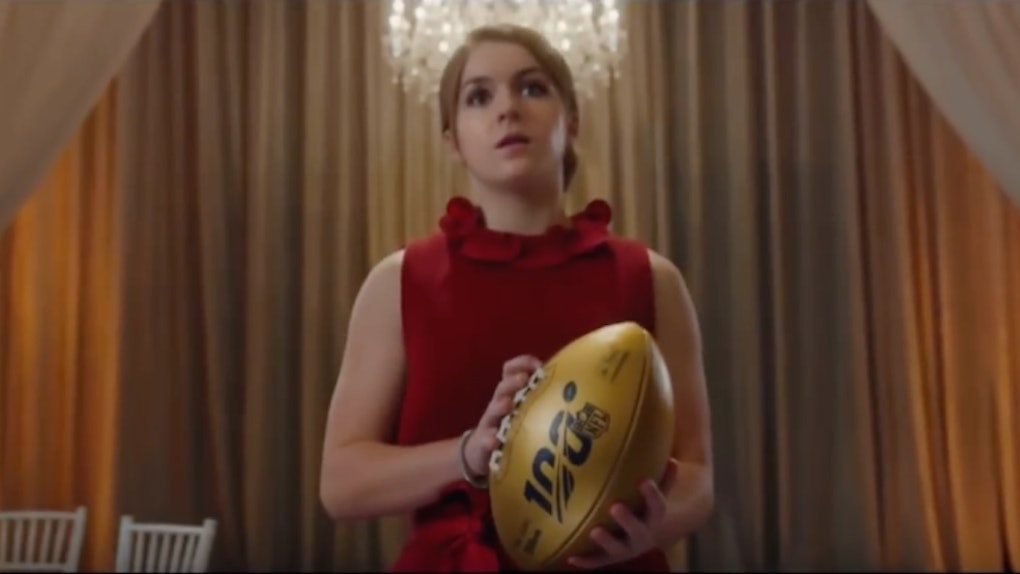 Who's The Woman In NFL's 2019 Super Bowl Commercial? Sam Gordon Had A Starring Role

The Super Bowl is known not just as the biggest football game of the year, but as the biggest night for commercials, too. But none stood out during halftime quite as much as the NFL's very own commercial, which featured dozens of NFL icons like Barry Sanders and Ed Reed. The ad showed players past and present alike in what seemed like a staged awards ceremony, where everything spirals into chaos and they all end up all tossing a football to each other. But who's the woman in NFL's 2019 Super Bowl commercial? Viewers were in for a surprise when they saw Sam Gordon on screen alongside the greats. After all, there are no women players in the NFL, so, who is she, exactly?

Well, Gordon is the female football player the world needs, y'all. According to a YouTube video posted by the NFL on Feb. 2, Gordon started the Utah Girl's Football League in spring 2015, after realizing that, as a football player herself, there were next to no real opportunities for girls to play tackle football. Three years later, the league has grown to 400 (!!!) young women and girls. The most impressive part? Gordon is only 15 years old.

I don't know about you, but when I was 15 I was doing much less impressive things, like getting braces and lining up to watch the midnight premiere of Twilight. Not Gordon. The high-schooler's next big goal is to start a girl's football team at her high school so she can pave the way for girls to keep advancing in the sport. Hell yes.

"It's amazing that football can let so many different types of girls play it," she says, in the NFL video. "I can see girls' confidence growing as they're playing, and I can see girls having so many more opportunities. Not only can they be players, they can be coaches, they can be commentators, even be the NFL commissioner."

In the NFL Super Bowl commercial, you see Gordon catch the football, and run off with it instead of tossing it back to the player who threw it to her. "You want this?" she asks. "Come and get it." Yaaass, Sam!

Last year, Gordon was the inaugural winner of the NFL Game Changer Award, an award that was "created to celebrate those who are committed to moving the game forward," according to an NFL press release. "This award recognizes a member of the football family who has positively contributed to the sport and his or her community." She accepted the award at the 2018 NFL Honors Ceremony, and in her poignant acceptance speech, she made it clear that the message is simple: Girls want to play football.

"Before Title IX, some people thought that girls were not interested in playing sports, but they were wrong," she said. "They were just as wrong as people who argued that women did not want to vote, to hold public office, or to be lawyers or doctors. People who don't think that girls want to play football are wrong too. Throughout history, women have had to fight for the right to follow their dreams. My dream is that high schools and colleges will offer girls football teams, and I'm going to fight to make my dreams come true."

BRB, sobbing. With Sam Gordon at the forefront of the girls football movement, I have no doubt we'll be seeing some major developments in this space in years to come.

More like this
Lamar Odom's Quotes About The Kardashian Family Curse Do Not Hold Back
By Brandy Robidoux
Prince Philip, The Duke of Edinburgh, Has Died At The Age Of 99
By Noelle Devoe
Here's Why EXO's BAEKHYUN, CHANGMO, & Raiden's "Runner" Is The Perfect T1 Theme Song – EXCLUSIVE
By Michele Mendez
Stay up to date