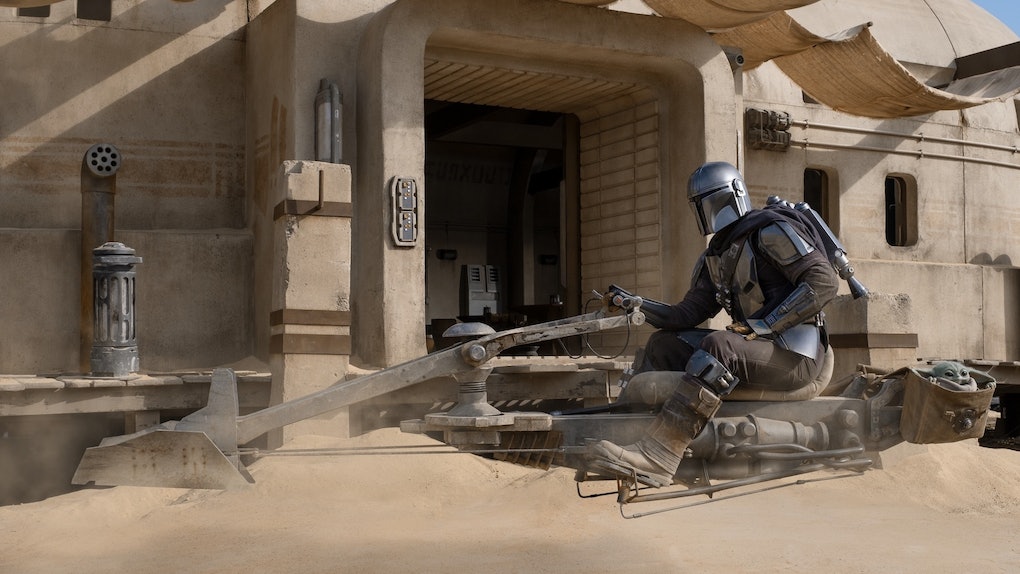 Who's The New Character In 'The Mandalorian' Season 2, Episode 1? 3 Theories

When The Mandalorian's first season ended, Mando was charged with a quest. His mission (should he choose to accept it) was to take the character known as "The Child" and find his people. This way, Baby Yoda could grow up safely and securely among those who could train his developing skills with The Force. But Mando's first attempt at finding someone who might know where Baby Yoda belonged seemed to be a bust... until a mysterious figure appeared in the final scene. So, who's the new character in The Mandalorian Season 2, Episode 1, and how might he get involved in the journey?

Warning: Spoilers for the Season 2 premiere of The Mandalorian follow. Mando's idea is to find another Mandalorian, one who isn't a foundling like he is, but rather someone born and raised on Mandalore. Since the Jedi are an ancient enemy of the Mandalorian people, another of his warrior caste would know the history, and perhaps the location, of Baby Yoda's people.

But the information Gor Koresh provides Mando seems to be incorrect. The Mandalorian warrior on Tatooine, out in Mos Pelgo, isn't the real deal. He's Cobb Vanth, the town sheriff. He wears Mandalorian armor, but he does not follow the way, nor is he trained to. He just lucked into it after he was rescued by Jawas, who had the armor for sale.

Fans may have recognized the armor as the suit Boba Fett wore in the original Star Wars trilogy, left over from when Fett fell into a Sarlacc pit and died.

But did he really die? As Mando and The Child head out, a shadow watches them. It may be hard to recognize him in the fading light, but it's the actor who originally played Boba Fett back in the 1980s films, Temuera Morrison.

So, is this new character Boba Fett? One theory circulating the fandom says yes. Since the actor has aged along with the franchise, he's the right age as his character would be in the timeline. Moreover, in the now-discarded Star Wars Expanded Universe, Fett does survive the Sarlacc. All this would bring the new canon in line with what older fans have known for years: Boba Fett is alive. But if it is Fett, why did he never take his armor back from Vanth? Will he follow Mando, now that he's seen his armor taken from the planet?

However, this isn't the only theory out there. As Star Wars: The Clone Wars established over a decade ago, Fett was a clone. (The original was Jango Fett.) That means many may look and sound exactly like him, but are not Mandalorians, including a significant character from The Clone Wars, Captain Rex.

Rumors have swirled that both Rex and Ahsoka would be making their live-action debuts in The Mandalorian this season. If this new character is Rex, it would explain why he never felt the need to rescue the armor. But there are also holes in this theory, including that Rex is an older clone than Fett, so the age isn't quite right. Also, unlike Fett, who has reason to have stayed on Tatooine, there's no good reason for Rex to be there.

That brings me to the final theory: It's an entirely different clone. The Mandalorian has already seeded cloning tech into the show's mythos. If the producers decided against the "Fett miraculously survived" plot of the defunct Expanded Universe, this could provide a Fett-like character without going there.

More like this
The 'Star Wars' x Herschel 'The Mandalorian' Line Includes A Baby Yoda Backpack
By Rachel Chapman
'The Falcon And The Winter Soldier’s Finale Post-Credits Scene Hints At A Season 2
By Abby Monteil
The 'Falcon & The Winter Soldier' Character You Are, Based On Your Zodiac Sign
By Chelsea Jackson
Stay up to date