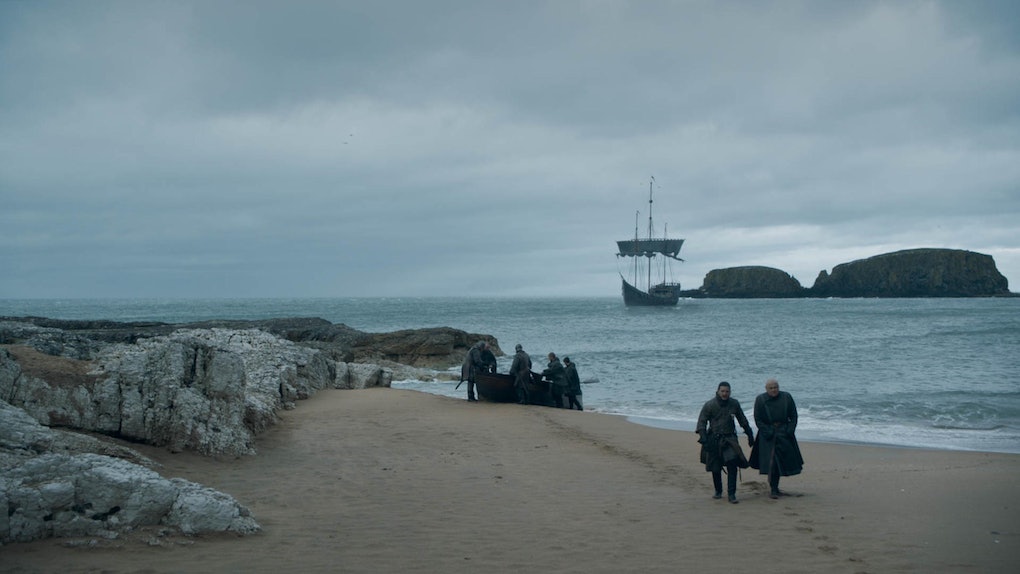 Who Was Varys Writing Ravens To? 'Game Of Thrones' Fans Are Still Waiting For Answers

Game of Thrones Season 8 Episode 4 ended on a sour note. Daenerys, having once again listened to the "wisdom" of Varys and Tyrion and not attacked King's Landing, was rewarded with the loss not only of her dragon Rhaegal but her advisor Missandei. Episode 5 opened a fortnight later, as the forces marching from Winterfell have finally arrived, to find the queen inconsolably grieving, awhile Varys gets a move on in advertising the availability of a less broken Targaryen candidate. But who was Varys writing ravens to? And what did those messages say?

Varys is clearly in high correspondence mode when the episode opens, sending the Westerosi versions of Twitter DMs to people ahead of Jon Snow's arrival. The camera does a close up of the scroll he's about to send by raven to an undisclosed recipient. The message is cut off on either side, but the parts the viewer can read are pretty clear:

...not the only Targaryen left. Rhaegar and Lyanna...

Obviously, Jon's secret is now out and about in the world, as this is almost certainly not the only message Varys has sent. But who could he be writing to? There are several candidates.

The one place Varys is not sending these ravens: Winterfell. Sansa already knows. If she's as good as everyone thinks (and let me be clear, she is), her telling Tyrion about Jon was in hopes of producing this exact outcome. It is far better the message of Jon Snow's parentage doesn't come from her, but a "neutral" third party of someone like Varys.

So who could Varys be writing too?

However, the most interesting answer is one fans might not consider: Old Town, where the Citadel and the Starry Sept are, the twin heads of faith and science.

Cersei already tangled with the wrong side of Faith of the Seven in this series and the results were ugly. Tyrion got on the right side of the Lord of the Light for Daenerys in Meereen, and the results were almost instant stability. Both the Maesters and the Faith have a great deal of sway over both the wardens who rule over the different segments of the Seven Kingdoms, as well as the flocks of worshippers who attend services on the regular. Both also fear Daenerys both because she's a woman and a potential mad Targaryen.

Varys putting both on Jon's side could be the real keys to the Westerosi kingdom. Daenerys might never have a chance to rule after all.

More like this
This 2021 'Game Of Thrones' Season 8 Trailer Is So Confusing... & So Good
By Ani Bundel
What’s Coming To Disney+ In May 2021? 'Cruella,' 'HSMTMTS' Season 2, & More
By Ani Bundel
Will ‘The Falcon And The Winter Soldier’ Get A Season 2? This Could Be A Hint
By Ani Bundel
Stay up to date