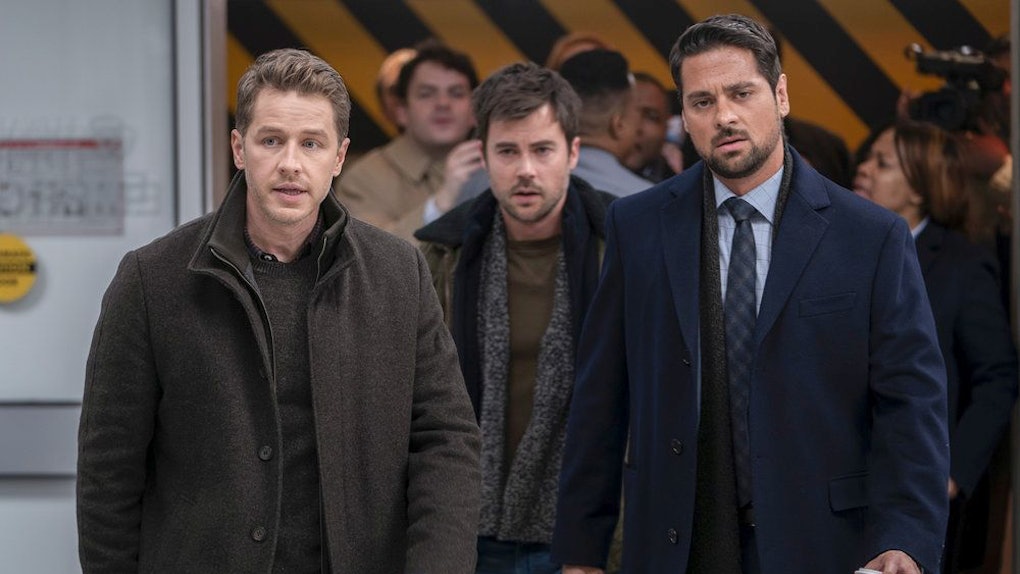 Who Was Shot On The 'Manifest' Finale? Season 1 Ended With A Cliffhanger

Manifest never seems to play it straight. Why zig when the plot can zag? It's one of the reasons for watching the show. Just when one thinks it's a government conspiracy, a whole new character shows up and turns the story of Flight 828 on its ear. In this case, Zeke's existence disproved the link between time travel and the plane. However, Zeke's connection with Michaela has complicated everything, and now there's been a shooting. Jared's jealousy caused the two of them to have a guns-drawn showdown. Who was shot on the Manifest finale? Fans will have to wait for Season 2 to find out. Warning: Spoilers for Manifest Season 1 follow.

Ever since Michaela found Zeke in the cabin a few episodes back, everything about the show went haywire. Here was a character who also time traveled during a storm, but unlike everyone else, he'd only jumped forward a year. But he too had the callings and the blood marker of those on the flight, suggesting whatever he went through, it was the same as everyone else.

This story wasn't about what happened to Flight 828 alone. Michaela's deep connection with Zeke seemed to be of a piece with the time travel, a way to tie him in with everyone else.

Jared's freak out over Zeke felt strange at first. The show established he and Michaela are not over each other, even though five and a half years passed on his end, and he's married to someone else now. At first, his jealousy seemed like a reaction to being left out of finding Zeke in the first place. Then it appeared protection-driven, as well as Jared putting on his detective hat over a former addict who could hurt the people he loves.

However, this week's complete freakout by Jared is just ugly jealousy. The detective thinks he's caught out Zeke buying drugs, when in fact Zeke purchased an illegal handgun, to also help protect these same people. When Jared goes to Michaela's apartment to confront Zeke, he pulls out it out to explain he didn't buy drugs. Jared goes over the top and pulls his gun out, even though Zeke is trying to demonstrate he has no intention of using it. Instead, it's a standoff, and a dumb one to boot.

That's when Michaela comes home and startles them both by opening the door. A shot rings out.

So who got hit? Speaking to Entertainment Weekly, showrunner Jeff Rake would only say this:

We heard the bullet go off, we’ll have to wait and see where it landed... That bullet did not hit the ceiling.

So who got shot? Did Zeke complicate his life by shooting a police officer? Did Jared kill Zeke, robbing Michaela and Ben of learning more about the non-Flight 828 time-traveler? Did one of them hit Michaela, making them both look like complete maroons?

NBC has not yet greenlit Manifest Season 2, but hopefully, there will be word soon. Until then, fans will have to wonder and wait.