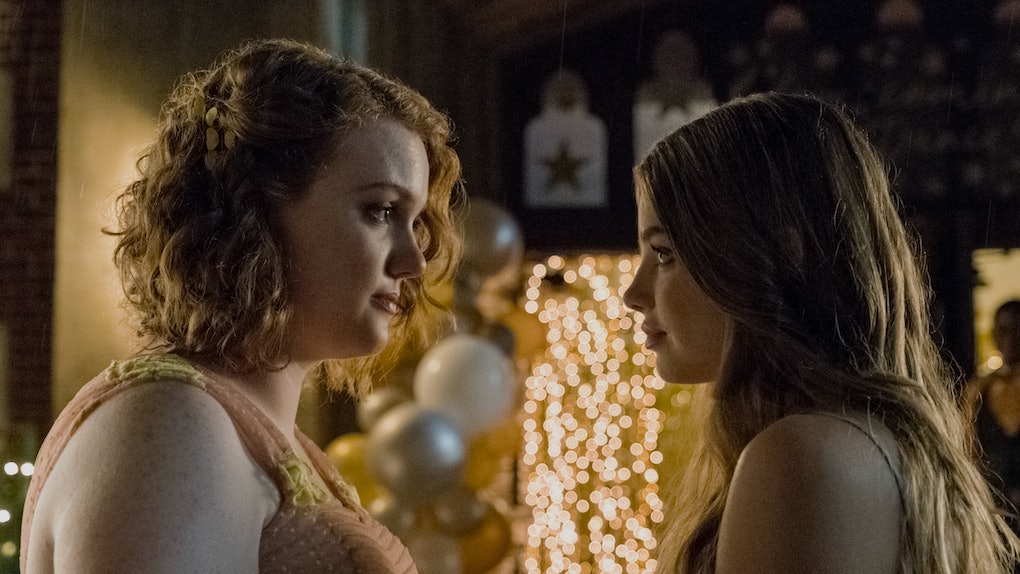 Who Plays Veronica In 'Sierra Burgess Is A Loser'? Kristine Froseth Is Stealing Hearts

If you've already played To All the Boys I've Loved Before on a loop the past few weeks, your newest dose of Noah Centineo comes via Netflix's Sierra Burgess Is a Loser. Centineo plays a jock who thinks he's texting a beautiful cheerleader, but thanks to a wrong number mishaps, he's talking to the smart but unpopular Sierra, played by Stranger Things' Shannon Purser. Seeing Centineo in another teen romance already makes me want to tune in when the film hits Netflix on Sept. 7, but co-star Kristine Froseth is also enchanting viewers with her performance. The 20-year-old is making her big break, so who plays Veronica in Sierra Burgess Is a Loser?

Appearing as cheerleader Veronica in the film, Froseth's character eventually pairs with Sierra to help each other win over their crushes. As Froseth recently told W magazine, the film is actually more of a a story about female friendship rather than a girl trying to win over a guy. She and Purser helm the movie, which is a modern retelling of the 1897 play Cyrano de Bergerac, and while Purser is already a rising star thanks to this role and her time as Barb on Stranger Things, Froseth's time in the spotlight hints at more exciting things to come. So, before you binge Sierra Burgess Is a Loser incessantly, here's what you should know about Froseth.

1. Growing Up, She Split Her Time Between New Jersey And Norway

Reportedly born in New Jersey, Froseth grew up both there and in Norway because of her father's job. Speaking to W, she said of her childhood, "It’s such a weird combination... They were very, very different. As a kid, I didn’t really appreciate it, because you have to say goodbye to your friends all the time."

She may have been raised with a sense of wanderlust, but the way she was discovered as a talent is the most American story ever. Representation scouted her when Froseth appeared in a local mall fashion show in New Jersey. Is there anything more all-American than that?

Rebel in the Rye was a J.D. Salinger biopic starring Nicholas Hoult and fellow Netflix leading lady Zoey Deutch (seen in Set It Up). Froseth played Shirley Blaney, a relatively small character, but the experience was life-changing for her. While she had modeled before, acting in front of the camera was a brand new experience for Froseth, who told W:

It was so overwhelming, and I was so amazed that this is how movies are made. There is a camera right in front of you and there are 50 people behind it and there is so much going on, but the actors are so focused and disciplined… In modeling, you have to be so aware of your body and the camera, and that was one of my biggest challenges getting into acting because you’re not supposed to be aware of the camera. It took me a minute to ignore the camera and lose yourself in it.

3. She Couldn't Be A Bigger Fan Of Shannon Purser

Froseth would definitely sign any "Justice for Barb" campaigns still floating around the internet. While she adores Sierra Burgess Is a Loser for its unique story, working alongside Purser only made the experience sweeter. She said to W, "She is such a sweetheart and just 100 percent goodness. She always had my back, and I’m incredibly grateful to have gotten to work with her."

BRB, I'm adding Veronica and Sierra to my list of favorite fictional friendships.

4. She's Spoken Out About Harassment And Abuse In The Modeling Industry

In late 2017, model Cameron Russell began a social media movement discussing the abuse models faced while working. Under the hashtag #MyJobShouldNotIncludeAbuse, models shared their experiences with inappropriate sexual conduct while at photoshoots or casting calls. Froseth also opened up about her scary encounters, saying in an interview:

When I was 15 and I was getting all these inappropriate texts and calls, I just went along with it because everyone else was. You can be in situations where you're told to undress, it's hard to be on a set and not feel the pressure. [Others' stories are] all horrific. It's crazy. I think we've all just accepted it and tolerated this behavior.

She may be the enviable cool girl in Sierra Burgess Is a Loser, but Froseth admitted to Entertainment Tonight that she was too shy to talk to guys back in high school. Same, girl, same. In her interview with W, she also shared that she disliked high school and was terrified of the mean girls. With her character initially presented in the same vein, any worries about recreating that kind of high school trope didn't seem to apply for Froseth. For her, playing a cheerleader was "fun."

We'll get to watch how fun being the cool girl was when Sierra Burgess Is a Loser debuts on Netflix on Friday, Sept. 7.