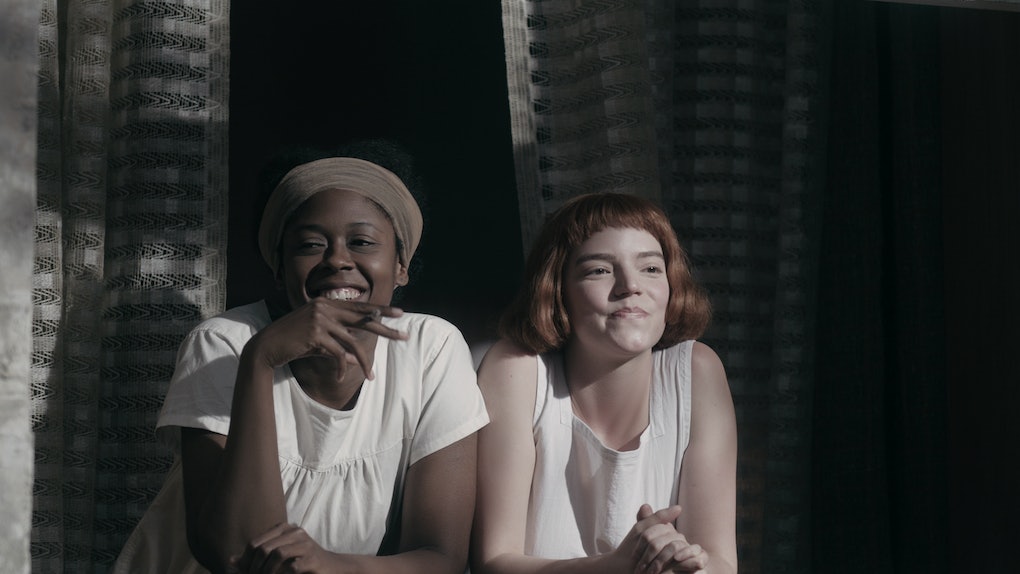 Chess might be difficult to master, but in Netflix's newest series, The Queen's Gambit, it's not the famous game that's so tricky to get a grasp on — it's life itself. And that's why Moses Ingram, who plays Jolene in The Queen's Gambit, thinks this period drama is so poignant to watch today. So, while you're following protagonist Beth Harmon (Anya Taylor-Joy) on her journey through the competitive chess ranks, be sure to keep an eye on Jolene, her childhood bestie who ends up bringing the moving pieces of the story together.

Warning: Light spoilers for The Queen's Gambit follow. The new limited series, which hit Netflix on Oct. 23, is a coming-of-age tale based on the 1983 novel of the same name by Walter Tevis. The seven-episode season opens in the 1950s with a young Beth entering an orphanage after the death of her mother. Her time at the orphanage sets up the majority of the major plot points followed throughout the show: she discovers her love of chess, develops the beginnings of her substance use disorder, and meets Ingram's character, Jolene.

After the second episode, many fans likely wondered whether Jolene would just become a fond memory from Beth's rough childhood. In the following episodes chronicling Beth's journey to become a chess icon, a handful of well-meaning men helped Beth succeed in the male-dominated sport. But it's not all glamorous; Beth's substance use disorder became increasingly difficult to live with. Just when Beth's life seemed to be completely crumbling, it was Jolene who showed up and helped her friend in ways none of the men could.

"They're each other's first friends, first family, first sisters. I think when you know someone that intimately, you also have the right to give it to them hard and fast without the niceties," Ingram tells Elite Daily. "I think everybody needs good friends, you know — good people around you that are not just in the romantic sense. I think it speaks to the beauty of opening yourself up to love from people where you might not expect it."

In addition to the lifelong bond of two friends, it's the timing of The Queen's Gambit's release that Ingram thinks will help viewers connect with the story even more.

"I think people will identify with this feeling of isolation and loneliness with where we are now in quarantine, and working our way through investigating how we're coping," Ingram explains. "Because Beth is consistently trying to cope."

Although Ingram doesn't think the limited series will get a surprise second season — the story wrapped up pretty perfectly in the final episode — that hasn't stopped her from thinking about where Jolene's story will go next. "I would really love to see her out there on the front lines, making the world a better place for Black people and continuing to carve a lane where there is none," Ingram says.

As for Ingram's future, following her breakout role in The Queen's Gambit, she will be seen next as Lady Macduff in Joel Coen's upcoming film, The Tragedy of Macbeth, which stars Denzel Washington and Frances McDormand, set to be released in 2021.