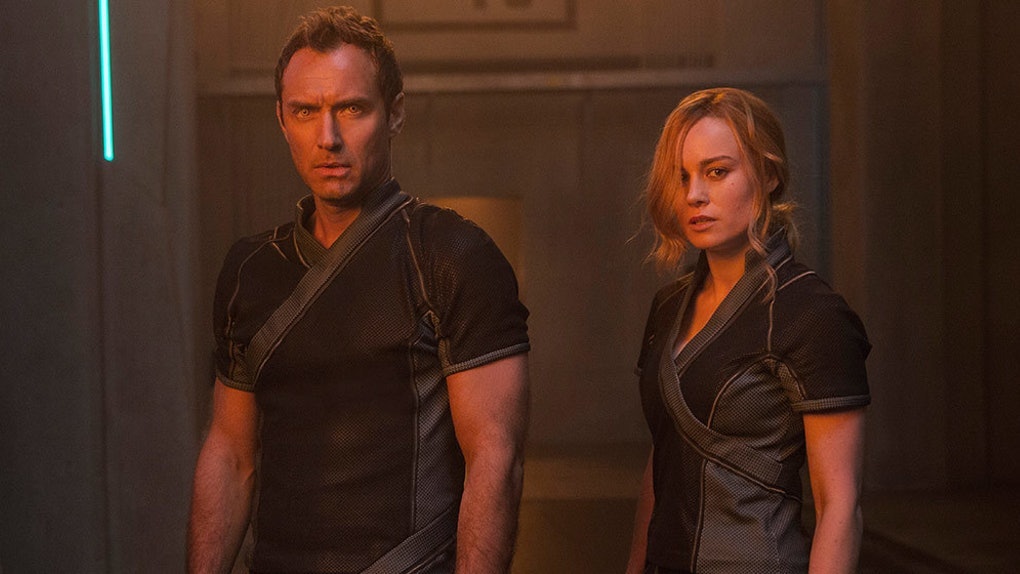 Marvel keeps secrets under wraps better than your most tight-lipped friend, but it looks like the movie studio has finally spilled about one of its latest mysteries. Given the cloud of secrecy surrounding Jude Law's Captain Marvel character, fans have been devoted to figuring out who the actor plays, but the wait is over. An official Captain Marvel tie-in book just confirmed the character's name, so who is Yon-Rogg? The Starforce Commander seems to be one of Captain Marvel's fiercest advocates.

ICYMI, fan speculation about Law's role initially led to the belief that he was playing Starforce leader Mar-Vell. While Law was always open about his character leading the team of Kree warriors, his suspected role came about thanks to the Disney Movies website accidentally posting a photo of a costumed Law with "Mar-Vell" in the caption. In the Marvel comics, Mar-Vell was the original Captain Marvel and a Kree fighter, but according to The Wrap, his work of saving humans in need led to the Kree alien race calling him a traitor.

Seeing as Law had hinted that his Captain Marvel character was "a mentor" to Brie Larson's Carol Danvers, this leak made total sense. But I guess Marvel is even more skilled in secrecy than we thought, because its newest publication is proving all of the Mar-Vell theories wrong. The company's official tie-in-novel, Starforce on the Rise, points toward the Starforce team's commander being Yon-Rogg, not Mar-Vell.

Written by Steve Behling, the middle-grade book introduces Yon-Rogg as a respected military commander who partners with the Kree ruling force, the Supreme Intelligence, for top-secret missions. Going by her Kree warrior name in the story, Captain Marvel / Carol is considered the strongest member of Yon-Rogg's team. In the Marvel comics, Yon-Rogg also has a history of questioning Kree authority and turning against them, so Law's performance is definitely one to focus on during your midnight screening of Captain Marvel.

As comic fans already knew, Yon-Rogg's Starforce team is a Kree military unit, and ScreenRant even broke down each member of the six-person squad for fans catching up with their Marvel facts. Filling in the gaps before March's Captain Marvel begins, Disney's official summary for Behling's book reads:

Before Carol Danvers was Captain Marvel, she was Vers, a key member of the elite Kree Starforce warriors who wage their war against the equally formidable Skrull aliens. This middle-grade novel will focus on key adventure of Vers during her time with Starforce, setting up the perfect entry point for readers to Marvel Studios’ Captain Marvel, in spring 2019.

As ScreenRant points outs, this identity confirmation fuels the possibility of a major movie twist. The characters listed as Starforce members in Captain Marvel are villains in the comic books, perhaps suggesting that Carol learns she can't actually trust Yon-Rogg and her other teammates. Is a possible betrayal why she was presumingly off the grid until Nick Fury contacted her at the end of Avengers: Infinity War? We'll have to wait and see how Captain Marvel adapts the characters' comic book origins, but at least Law can stop dancing around the truth in interviews now.

Captain Marvel is in theaters on Friday, March 8.

More like this
Here's How To Stream 'Nomadland' So You Can Finally Get The Hype
By Rachel Varina
'Downton Abbey 2': Release Date, Cast, Trailer, Photos, & More
By Ani Bundel
This Video Of Disneyland's Marvel's Avengers Campus Is Super
By Cianna Garrison
Stay up to date