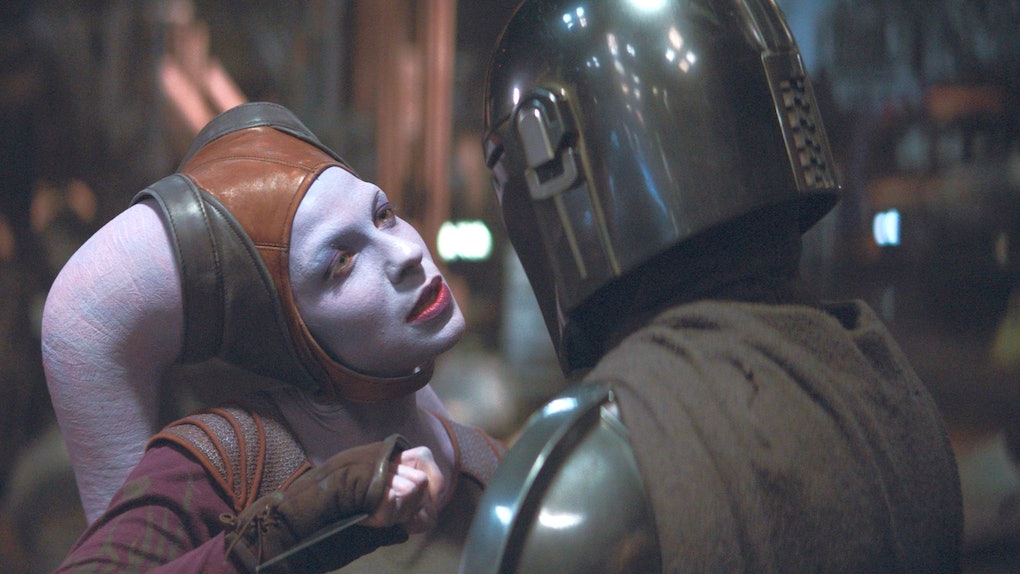 Who Is Xi’an On 'The Mandalorian'? This Twi’lek Is From Mando’s Past

From week to week, the Mandalorian and Baby Yoda travel across the galaxy. Mando is always looking to make cash off the grid now that he's on the outs with the Bounty Hunter's Guild with a wanted child. Usually, these adventures end with the guest star of the week dying. But not in Episode 6, when Xi'an arrives on the scene. But who is Xi’an on The Mandalorian, and why does Mando care so much? Warning: Spoilers for The Mandalorian Season 1 follow.

In "The Prisoner," Mando stops in at an intergalactic chop shop. The place is run by an off-the-grid set of hustlers and criminals run by Ran Malk, an old acquaintance of Mando's, willing to throw him some side work. For the use of his ship, Malk offers him a spot on Mayfield's team, doing a prison break of someone he claimed had been locked up by a fellow crime syndicate.

This was a lie. The breakout was actually on a New Republic high tech floating prison ship. The prisoner was Qin, a Twi’lek who hated Mando's guts. Malk claimed there were only droids on board, another lie. Upon arrival, the human New Republic guard called a phalanx of X-wings to blow up the band of outlaws, giving them 20 minutes to get their prisoner and escape before dying.

Plus, the team had someone on it from Mando's past: Xi'an.

Xi'an and Mando once had a relationship of some sort. "A lady never tells," she purrs when Mayfield asks if she'd seen Mando with his helmet off. But her sneer of "This is the waaaaay" at him highly suggested they hadn't parted on good terms.

Once Qin was out of lockup, it became even more clear things hadn't ended well. Qin and Xi'an kicked Mando into the now-empty cell, shut the door, and ran off laughing. Mando's paranoia was right; this was a revenge gig.

Within a few minutes, Mando snags a droid and gets out, going on the warpath against his betrayers. It was like Agatha Christie's And Then There Were None, except Mando was the one taking everyone out. All except Qin, who he took back to Malk for payment.

Mando may be a wanted man, but he still follows the code. Sure, he attached the New Republic beacon calling down the phalanx of X-wings to Qin before dropping him off. But no one said he was responsible for Qin's survival after seeing him back to Malk.

But Mando's code was strong enough not to kill his compatriots either. Only the droid, who was threatening Baby Yoda, was incinerated. At episode's end, Xi'an and her friends wake up to discover they are locked in Qin's cell and vow to take him out. Mando's enemies seem to be multiplying.

More like this
The 'Star Wars' x Herschel 'The Mandalorian' Line Includes A Baby Yoda Backpack
By Rachel Chapman
'Grey's Anatomy' Is Officially Renewed For Season 18 & Ellen Pompeo Will Return
By Ani Bundel
This 'Mare Of Easttown' Promo For Season 1, Episode 5 & Beyond Is So Intense
By Ani Bundel
Stay up to date