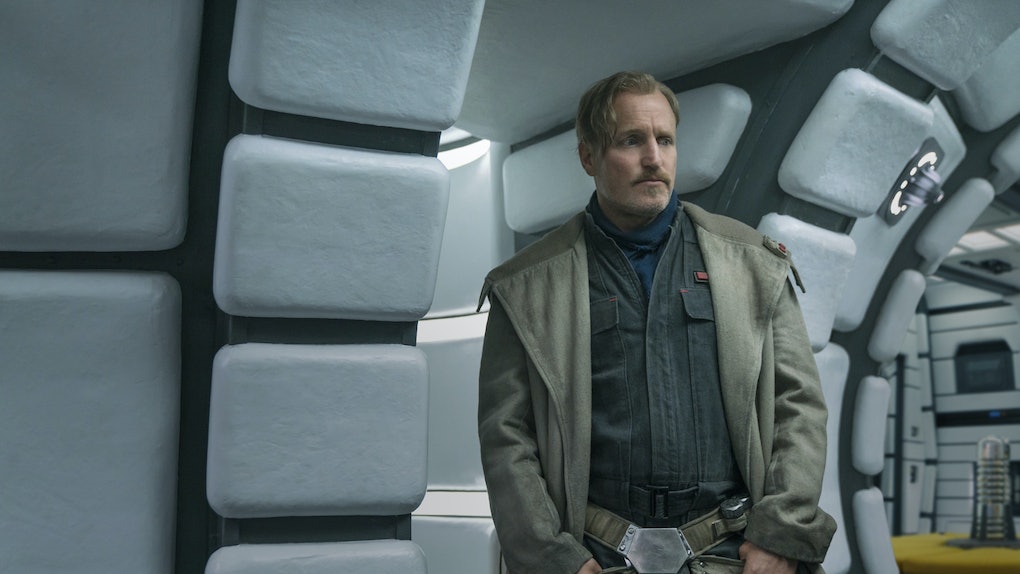 Solo: A Star Wars Story is billed as the "Young Han Solo" film, explaining how Han got to be the man fans met in A New Hope. This means some of his adventures referenced in the Original Trilogy are included, and characters like Chewie and Lando are part of the adventure. But just as many new characters are also introduced, like his love interest, Qi'ra, as well as the man who inspired him to become an outlaw, Tobias Beckett. Who is Tobias Beckett? Warning: Spoilers for Solo: A Star Wars Story follow.

When viewers first meet Han, he's a gutter rat on Corellia, with little direction in his life other than Qi'ra. When he loses her, he winds up joining the Imperial Army because he literally doesn't know what else to do with himself. Then one day, after watching clueless commanders get themselves blown up day after day, he looks up and sees a guy who is amazing. He's shooting guns out of both hands, flipping them and grabbing weapons from those he's taking down, and being the biggest badass fighter Han's ever seen.

Solo instantly wants to follow him, and when he discovers the guy is actually not even Imperial Forces, but a leader of a smuggling gang come to steal a ship from the Imperial Forces, he's even more impressed. That's the kind of person Han wants to be.

That guy is Tobias Beckett. According to Wookieepedia, he's originally a native of Glee Anselm, who grew up to become a professional thief working for Dryden Vos, head of the crime syndicate Crimson Dawn. The love of his life, or at least the love of his right now, is Val, a badass warrior, a cold-blooded killer, and a woman who is quick with hacking into systems as well.

The two of them work well together, though Val is far less quick to trust strangers than Beckett. While Val seems to be the killing muscle of the team, Lando reveals Beckett isn't so shy about ending lives either, having pushed bounty hunter Aurra Sing to her death. In true Beckett style, he refuses to take responsibility for it, claiming he just did some pushing. "It was the fall that killed her."

Beckett is described as "a survivor who quietly worked out angles that enabled him to come out ahead." That's the lesson he spends the entire movie attempting to impart to Solo as his mentor, no matter what's happening. He keeps reiterating Han can't trust anyone. Viewers are supposed to think he's mostly talking about Qi'ra, who is working her own angles at every minute in order to survive. But in truth, Beckett means Han shouldn't trust anyone, not even him.

Turns out he's not kidding. At the first sign of being able to screw Han over, Beckett rats him and his plan out to Vos, revealing Han is planning to rob the gangster of the coaxium hyperspace fuel and give it to Enfys Nest. Oh, and he's planning to steal away Qi'ra as well.

But Han was an apt pupil, more than Beckett gave him credit for. He guessed Beckett would double-cross him, so the coaxium fuel isn't with Nest. It's here, with him on the Crimson Dawn ship. Seizing the opportunity, Beckett robs Vos himself, taking Chewie prisoner and leaving Han and Qi'ra to face the gangster they just failed to betray alone.

Qi'ra takes Vos down with a little help from Solo, before betraying him herself and claiming the mantle of the Head of the Crimson Dawn gang. Meanwhile, Solo follows Beckett, taking back possession of the coaxium for Nest, and freeing Chewie.

Beckett sighs and shrugs. It was good while it lasted. But before he can draw his blaster and kill Solo, Han already shot first and took him down. He learned Beckett's lessons well.

Rest easy Beckett, and always know you are the reason Han Shot First.