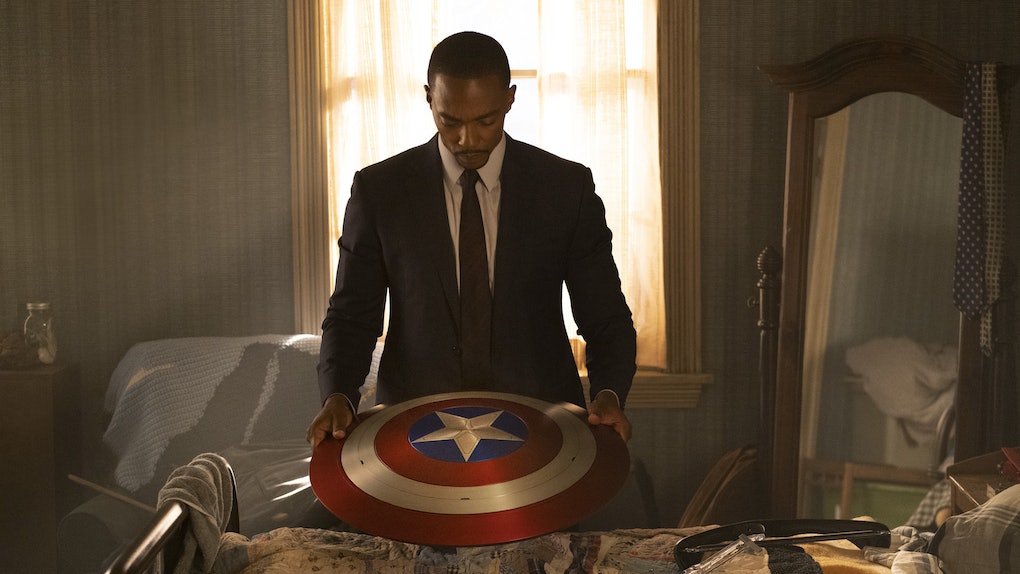 Who Is The New Captain America In 'The Falcon & The Winter Soldier'? It's A Mystery

Like WandaVision, The Falcon & The Winter Soldier begins in the days after Avengers: Endgame's final scenes, post-Tony Stark's funeral. As fans will recall, Steve Rogers took one last trip into the past to return the Infinity Stones to their appropriate locations. Then he chose to remain in the past as well, living out his life with Peggy Carter. As the film closed, an ancient Cap passes his Shield to Sam Wilson, telling him to take up the mantle. But who is the new Captain America now? As The Falcon & The Winter Soldier reveals, Steve's last wishes weren't honored.

Warning: Spoilers for The Falcon & The Winter Soldier Episode 1 follow. After thinking about it, Sam decided he's not the right man for the job. To him, there was only one Captain America, one person to whom the Shield belonged. Convinced he's doing the right thing, he turned the Shield over to the Smithsonian. It belonged in a museum, he thought, along with the other parts of Steve's regalia.

But Sam should have known the U.S. government would not be willing to give up on their symbolic propaganda superhero. Moreover, by "stepping forward to turn it in," as someone called it, Sam opened the door for politicians to remake the Captain America symbol all over again. And they don't ask him, a Black man, to step into that role. Instead, the government announced it had selected a new Captain America, as a broadly smiling white man stepped out in Steve's old outfit, carrying the Shield.

After everything Sam went through upon coming home, it was a body blow. His sister's business was in a state of collapse in the post-blip economy. Bankers were happy to take selfies with an Avenger, but they're not about to give him a loan. When he pointed out the Wilson family qualifies for an SBA loan under the post-blip stimulus bill, he was told those loans were being tightened up. His lack of stable income as a superhero (and lack of credit history for the last five years) meant his application was denied.

And now the government has stolen Cap's Shield and handed it to a complete stranger. But who is this man the government is eagerly naming the new Steve Rogers?

The actor in the suit had his face half-hidden by the Cap mask. However, fans are pretty sure it's John Walker (Wyatt Russell) in the new series. That name won't mean much to Marvel Cinematic Universe fans, but comic lovers will know it as the alter-ego of "U.S. Agent."

In the comics, Walker was introduced in 1986 as "Super-Patriot," who turned out to be a supervillain. He's the polar opposite of Steve. Instead of being from the Northeast, he's a good ol' Southern boy. Where Rogers is a Boy Scout, Walker is a violent figure who loves guns. The character was semi-rehabilitated from his initial role as a villain over time, rechristened "U.S. Agent," and made an Avenger.

How much of this will make it into the series remains to be seen. At this point, the new Captain America hasn't done much more than pose and wink for the camera. Whether he's a villain or a poor fool who just found himself in over his head remains to be seen. But Sam's path to stepping into Steve Rogers' shoes just took an unexpected detour.

New episodes of The Falcon & The Winter Soldier release on Disney+ on Fridays.