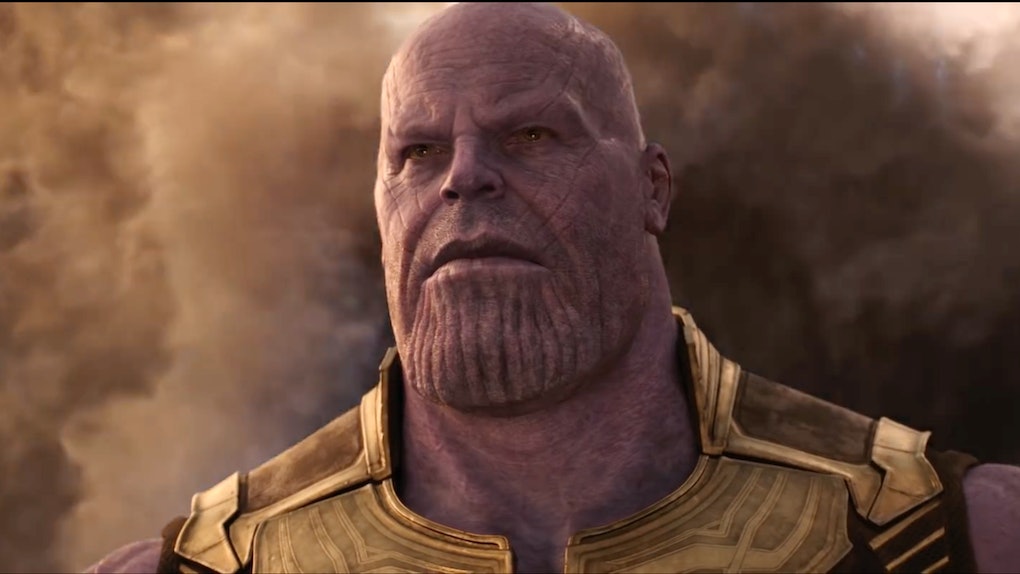 Who Is Thanos In 'Avengers: Infinity War'? He's Here & He's Ready To Collect

Earth faces its scariest, most daunting threat yet in Thanos, an intergalactic tyrant wreaking havoc on the Avengers in next year's Avengers: Infinity War. Marvel fans have gotten glimpses of Thanos in the post-credits scenes of the past two Avengers movies, but the newly released Infinity War trailer is the first time we are seeing Thanos actually on the move. If you're confused about who Thanos is and what he will be doing in Avengers: Infinity War, I've got you covered. Let's go over everything you need to know about Thanos before the Infinity War comes upon us.

Thanos has already popped up a few times in the Marvel Cinematic Universe before now, always with the goal of collecting the six Infinity Stones. He was first introduced in 2012's The Avengers, revealing himself as the being that was behind lending Loki his staff (the Mind Stone) in order to get him to retrieve the Tesseract (the Space Stone) for him. He gets a meatier role in 2014's Guardians of the Galaxy, when it's revealed that he is Gamora and Nebula's adoptive father. In that movie, he is behind the villain Ronan's attempts to take the Orb (the Power Stone) from Star Lord. The last time we saw him was in a post-credits scene after 2015's Avengers: Age of Ultron, in which Thanos puts on his Infinity Gauntlet and saying that he's ready to take a more hands-on role in getting the Infinity Stones.

The first Avengers: Infinity War trailer finally shows us Thanos in action, as we see him walk through a portal to Earth and slam down both Spider-Man and Iron Man, not to mention what he does to Vision. If you haven't seen it yet, check out the new trailer below:

The trailer reveals that Thanos will have succeeded in getting a hold of at least two Infinity Stones in Avengers: Infinity War, as we see them gleam on his gauntlet during one crucial shot. Given the color of the stones (blue and purple), it looks like the two that Thanos starts off the movie with will be the Space Stone and the Power Stone. That means he must have already retrieved the Orb that the Guardians of the Galaxy left with intergalactic space station Nova Corps at the end of Guardians of the Galaxy, and he either took or was given the Tesseract that Loki salvaged from Asgard at the end of Thor: Ragnarok.

That means there are four Infinity Stones left for Thanos to collect, and the trailer actually shows him getting another one! We get a glimpse of the warlord prying the Mind Stone out of Visions forehead. We actually only know where two of the three remaining stones after that are: Doctor Strange has the Time Stone, and The Collector (an intergalactic pack-rat of cosmic antiquities) has the Reality Stone after the events of Thor: The Dark World. The only Infinity Stone that hasn't appeared in the Marvel Cinematic Universe (to our knowledge) is the Soul Stone.

We haven't seen a real motive for Thanos in collecting the Infinity Stones in the Marvel movies yet, but if follows the comic books, he is obsessed with gaining ultimate power and destroying life because he is actually in love with Mistress Death, a physical embodiment of death itself. If he gets all six Infinity Stones, then Thanos will become all-powerful and able to command and manipulate every aspect of the universe. So like... yeah, pretty scary stuff.

We will be learning a lot more about Thanos in Avengers: Infinity War, which comes out in May of 2018.

More like this
This Video Of Disneyland's Marvel's Avengers Campus Is Super
By Cianna Garrison
The 'Zola' Movie Trailer Will Have You Reliving The Iconic Twitter Story
By Dylan Kickham
Where Is The 2021 Oscars Ceremony Being Filmed? The Location Is So Different
By Umber Bhatti
Stay up to date