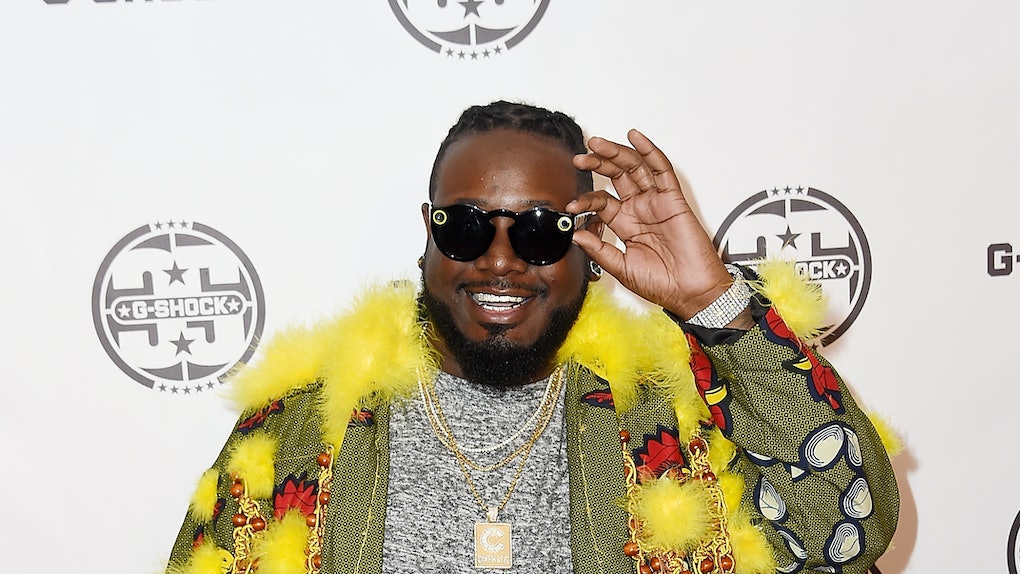 Who Is T-Pain's Wife? Amber Najm Has Been His Bae Longer Than Your Teenage Jam "I'm Sprung"

The iHeart Radio Music Awards are coming in hot and they're bringing T-Pain with them. The rap artist, who will forever be known in my heart for his hit 2007 song "Bartender," will be hosting the big music event. Due to this, he's back at the forefront of millennial's minds. It's made me wonder what he's been up to for the past 12 years and required a little bit of Googling to be brought up to speed on this man's life. One question old school fans might have is: Who is T-Pain's wife? Well, she's been around longer than his music career and it's about time fans get to know her.

T-Pain's wife's name is Amber Najm. She and T-Pain (born Faheem Rasheed Najm) have actually been married for 16 years. That's more than half of most of our millennial lives! I've obviously been brainwashed to believe all rappers hit the scene totally single so they can enjoy their tour buses filled with their many devoted fans. Meanwhile, T-Pain is over here holding down a relationship that started before I was wearing braces. (Now I'm the *sshole. Great.) Not only that, but he and Amber actually have three kids, too: a girl named Lyriq and two boys named Muziq and Kaydnz.

There isn't a ton of information out there about Amber, but I did stumble across a YourTango article that had some interesting facts. For example, she reportedly briefly worked for the military before settling down with T-Pain. She also reportedly graduated from Florida A&M University with a bachelor's degree. Over the years, T-Pain has been known to shout his love for Amber from the rooftops (or, like, on social media).

In February 2018, Mashable reported T-Pain tweeted about falling into a lovely routine with his wife. The tweet has since been taking down, but reportedly said:

My marriage has turned into a nightly routine of my wife and I running down the list of reasons we should go to bed early so we can wake up and get sh*t done the next day, then by the 675th cat gif on reddit we both yell “how the f*ck is it 3am?!” Worth it. I love her.

He also once professed his love on Instagram which was re-shared by The Shade Room. In his caption, T-Pain wrote, "I love you so much baby. I see ppl hatin on us so much and I bet they've never experience love nowhere near the levels you give me."

He added, "You’ve dealt with so much bullsh*t from me and came out of it a new woman with new goals and I can’t believe how dope you are. You are a gift from god and I can confirm this from many different angles and proofs." His caption then gets a little intense at the end in what appears to be an attempt at a (way too aggressive) joke.