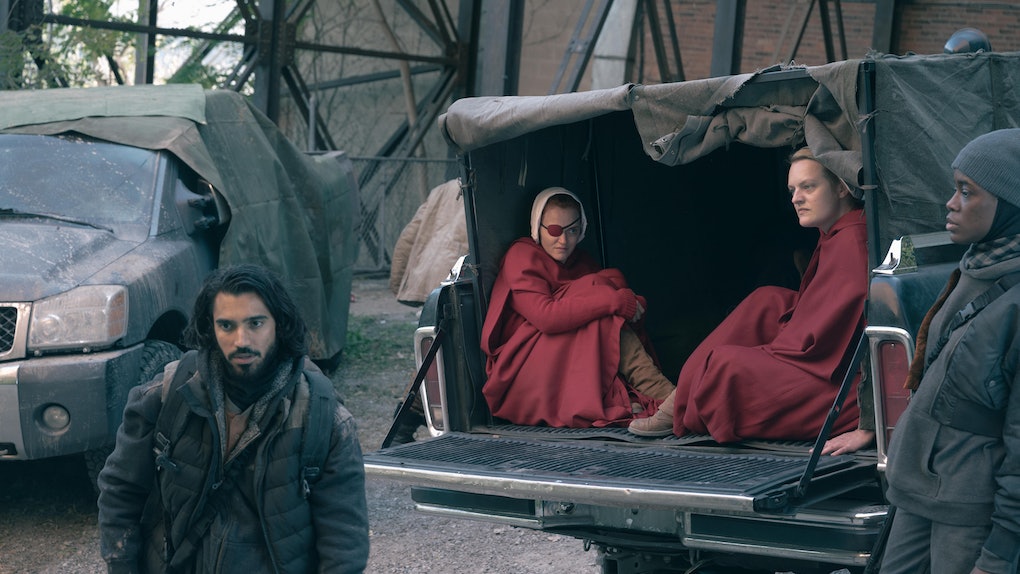 Who Is Steven In 'The Handmaid's Tale'? He's Definitely Not Mayday

The Handmaid's Tale ended its three-episode premiere with June and Janine managing a miraculous escape. But although they dodged the horror of a Magdalene Colony (for now, at least) the two still had a long way to go. In Episode 4, the two lucked out — if you can call it that — when they ran into Steven on their journey. But who *is* Steven in The Handmaid's Tale? He's no hero, that's for sure.

Warning: Spoilers for The Handmaid's Tale Season 4, Episode 4 follow. With the bulk of the Handmaid crew dead, June and Janine found themselves desperately carrying on alone. They managed to follow the train track to the railyard in the dead of night, but as noted above, their clothes made them easy to spot and to track.

June's idea — to hide in a milk tank car on a train bound for Chicago — wasn't a bad one. Obviously, she was heading that way because of Nick, but Chicago is also where American citizens are making their stand against Gilead. Following June's idea that "we are all Mayday," then she and Janine should find safety there.

But when the train got ambushed by American rebels, June and Janine were reminded that it's not so simple as "good" and "evil" — it's much more of a spectrum.

The rebel leader, Steven, agreed to smuggle them into Chicago, but when they arrived, he was reticent to feed or clothe them — at least not without payment. And since Handmaids are known for one thing (ugh), Steven expected payment in kind (UGH).

June was shellshocked. This was Mayday? Actually no. It turned out, despite June's brave words that "we are Mayday," she was still looking for the safe-haven rescue that doesn't exist. Steven didn't even know what Mayday was. This was just another hellhole in the various hellholes across the land formerly known as the U.S. Safety is just an illusion, as it's always been.

In an attempt to protect Janine, June volunteered to "pay" Steven for their stay. She would swallow her pride and disgust at how men just assume women's places are on their knees no matter what side they fight on. But when confronted with his unzipped pants, she couldn't do it. Steven seemed to relent in the face of her utter revulsion, but that was because there was another, more willing, option. While June got changed, Janine went and paid for their keep.

Will June exact revenge on this rebel Commander, as she's done with other men back in Gilead? One can only hope.