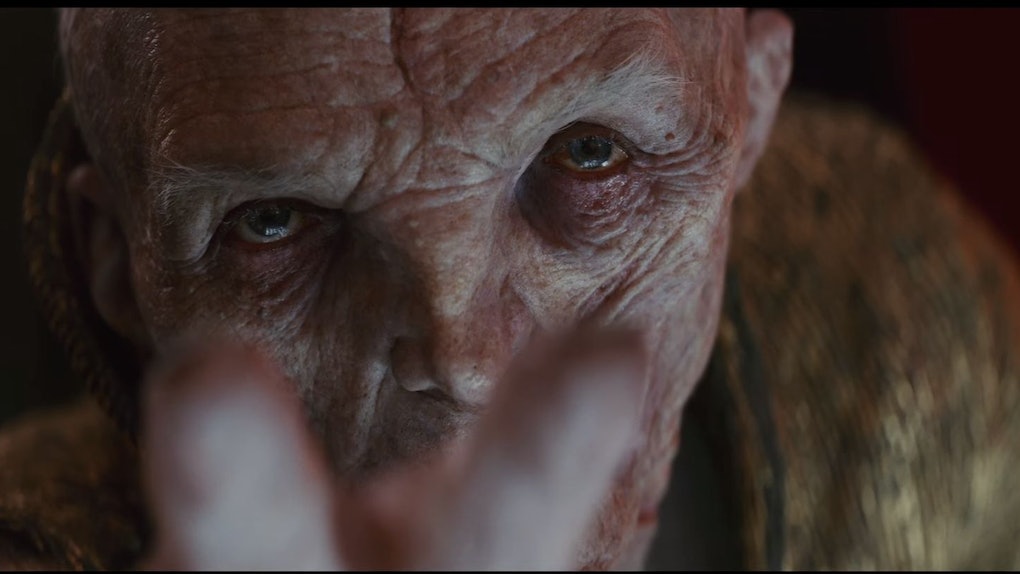 Who Is Snoke? The 'Star Wars: The Last Jedi' Villain Will Cause Major Problems

Most of the attention in our third Star Wars trilogy has gone to either the "old heads" like Han, Leia and Luke, or the "newbies" like Rey, Kylo and Finn. A few side characters have captured the imaginations of fans, like Captain Phasma of the First Order, or her counterpart, Poe Dameron of the Resistance. But when it comes to the shadowy villain in the corner, not much thought has been give to Supreme Leader Snoke of the First Order. But who is Snoke? Why are we all obsessed with how tall he might turn out to be? Should we worry about his plans for the future of the galaxy?

Snoke is a humaniod alien, as we saw in The Force Awakens. We never saw him in person, mind you, but as a holographic projection that towered over the room, leading some skeptics to wonder what he might be compensating for. (Hence the rumors of him being only "three apples tall.") According to the official wikipedia of Star Wars, (appropriately entitled Wookiepedia), Snoke was training apprentices to the Dark Side long before the First Order was formed.

Snoke had several apprentices before he became invested in the Skywalker bloodline, believing General Leia Organa and Han Solo's son, Ben Solo, the grandson of Darth Vader and nephew of Jedi Master Luke Skywalker, had the right balance of the dark and light sides of the Force in him.

Most people compare Snoke to Palpatine, especially in how he manipulated and conned Ben Solo to become Kylo Ren and trained him in the use of the Dark Side. But Snoke is more interesting than that. Note that his reasoning for picking the Skywalker grandson was because he had "dark and light in equal value." That's very different than anything we've seen before. The Jedi and the Empire never cared about harmony and balance in such a manner. They only focused on one side or the other.

This interest in harmony and balance may stem from the fact that Snoke is ancient. He's older than Palpatine, so old that Andy Serkis, who does the motion capture for the character, describes his disfigurements as being an advanced form of osteoporosis, that had turned him "as twisted as a corkscrew."

So what does Snoke's obsession with both sides mean? Is he the flapping head in a galaxy far, far away who spends his day on GNN spouting both-siderism? Does it matter that he is interested in the Light Side of the Force, if he only turns his pupils to the Dark?

It certainly puts Snoke's interest in Rey in an interesting light, no pun intended. Fans have assumed he is interested in her as a weapon, to use her as he uses Kylo Ren. But what if his interest isn't just in her power, but in her ability to, like Ren, go either way?

Does that suggest Rey and Ren are related? Most fans who are banking on Rey turning out to be a Skywalker think so. Making Rey and Ren, the "yin and yang" as it were, into two coins that have the ability to land heads or tails 50 percent of the time, is in keeping with the Skywalker legacy. One goes one way, one goes the other, their fates diametrically opposed.

But even if Rey and Ren are not related, even if they're just pawns in Snoke's game, what's to say he can keep control of them? Rey has already left Ren a mark to remember her by, and the trailer suggest by the end of things they might join forces. If so, who in the galaxy could stand against them? We're betting not even Snoke.