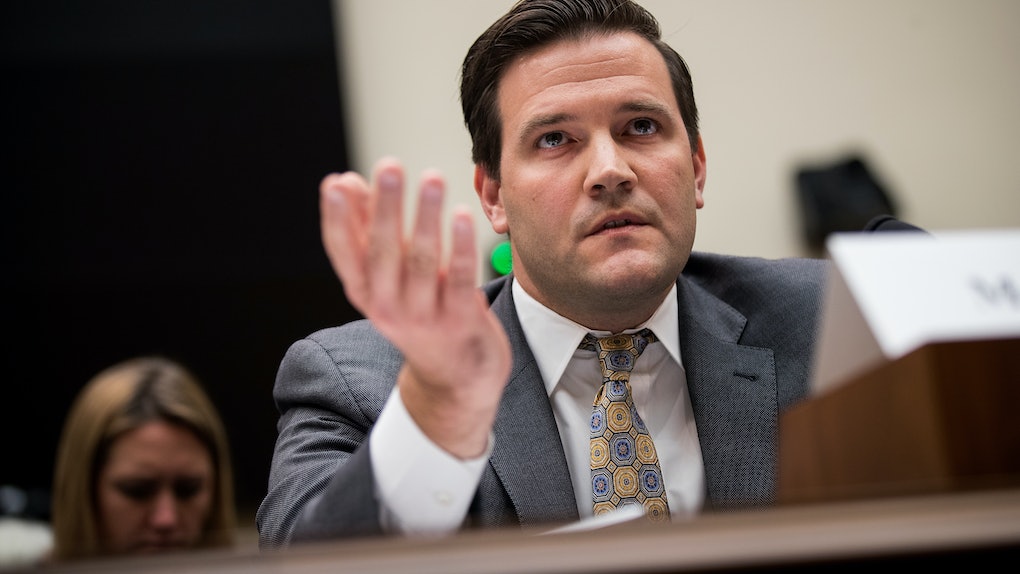 Who Is Scott Lloyd? Trump's Former ORR Director Is In Some Hot Water

In November 2018, Scott Lloyd was removed from his post at the Office of Refugee Resettlement (ORR) after an ACLU lawsuit revealed he was reportedly mishandling abortion requests from migrant teenagers. Elite Daily reached out to the White House and ORR for comment, but did not hear back at the time of publication. As of March 2019, the former ORR director is back in the news as new documents reveal more details about his time managing the pregnant teenagers in his care. You might be wondering: Who is Scott Lloyd? Well, new documents reveal further insight into his time at the U.S. Department of Health and Human Services (HHS).

In June 2018, research and communications organization American Bridge, which is committed to "holding Republicans accountable for their words and actions," submitted a Freedom of Information Act request when it was reported by The New York Times that Lloyd kept a spreadsheet of pregnant minors in his care. Elite Daily reached out to the White House and ORR for comment on the reported spreadsheet, but did not hear back at the time of publication. The American Bridge website noted that the FOIA demanded information on pregnant women and missing babies and girls in Lloyd's care. American Bridge finally got a response and procured those documents. On March 15, 2019, The Rachael Maddow Show revealed what was in them.

According to Maddow, the documents reportedly reveal a harrowing story. Lloyd's spreadsheet reportedly tracked the pregnant minors in his care, aged 12-17. It looked at whether or not they asked for an abortion, how far along they were in their pregnancies, and their menstrual cycles, which was misspelled as "menstral cycle" in the spread sheet (Not for nothing, but if you can't even correctly spell the method you're using to track how far along someone is in their pregnancy to prevent an abortion, maybe you shouldn't be the one in charge of their reproductive health.) According to a report from The New York Times, Lloyd asked his staff for a weekly spreadsheet that "tells him about any unaccompanied minors who have asked for [an abortion] and how far along they are in their pregnancy." When a girl was in need of counseling, Lloyd's office would call on people from "life affirming" pregnancy centers. The White House and ORR did not respond to Elite Daily's request for comment on the reports of Lloyd's time as ORR director.

In her on-camera analysis of the report, Maddow says:

This is the federal government, with your tax dollars, keeping an individualized record of pregnant teenage girls' menstrual cycles, whether they've had a positive pregnancy test, what the government knows about how they believe the girls got pregnant ... and whether this girl has requested an abortion.

Maddow also revealed what Lloyd and other government officials were doing with the spreadsheets.

And the last column is, of course, what the federal government is doing about it. And this record was being kept for the express purpose of subverting any of these girls' ability to get an abortion.

MSNBC reports that in March 2018, a court ordered Lloyd to stop "interfering with or obstructing" access to abortion, abortion counseling, and other pregnancy related care. Despite the order, according to the documents acquired by American Bridge's FOIA request, Lloyd appeared to continue tracking data. Although, as noted on the show by Brigitte Amiri, an attorney for a girl who fought ORR (and won) for her right to an abortion, it isn't known if the spreadsheet was kept for the purpose of blocking abortions beyond the court order to stop. The White House and ORR did not respond to Elite Daily's request for comment on the matter.

According to a Planned Parenthood Action Fund project called Tracking Trump, Scott Lloyd has a long history of blocking access to abortion, which is reflected in the documents obtained by The American Bridge. Before Lloyd was removed from his post at the ORR, the ACLU charged his office for reportedly denying seven girls' requests for abortions, including one who reportedly was pregnant due to rape. According to the ACLU reports, he also considered forcing a young immigrant woman to "reverse" an abortion with an untested medical procedure. The White House and ORR did not respond to Elite Daily's request for comment regarding the reports of Lloyd's actions as ORR director with respect to pregnant refugees.

In 2018, Vice reported that Lloyd visited detention facilities to try and coerce pregnant women not to have abortions and instructed the staff at the detention facility to inform another girl's parents that she'd had an abortion, even though she cited that disclosing that information would lead to abuse. The White House and ORR did not respond to Elite Daily's request for comment regarding the reports of Lloyd's actions as ORR director with respect to pregnant refugees.

Though Lloyd was demoted from his post at the ORR, he's now a senior advisor at the Center for Faith and Opportunity Initiatives, where he reportedly has power to help choose which religious groups get support for health programs. In an official statement from the ACLU in November 2018, Amiri, deputy director of the American Civil Liberties Union’s Reproductive Freedom Project asked Congress to prevent Lloyd from undermining more constitutional protections, saying, "We also urge Congress to conduct oversight of the Center for Faith and Opportunity Initiatives to prevent Lloyd from trampling on other constitutional protections, such as the freedom of religion, at his new post."

While it's good news that Lloyd is no longer the person in charge of granting access to abortions, it's not known if the spreadsheet is still being used at the ORR. The White House and the ORR did not respond to Elite Daily's inquiry regarding the current state of the spreadsheet.

More like this
These Video Reactions To The Derek Chauvin Verdict Show How Huge The Moment Was
By Lilli Petersen
These Tweets About The Derek Chauvin Trial Verdict Are Full Of Shock
By Rhyma Castillo
Winc's Summer Water Societé Rosé Subscription Is Back For 2021, So Bring On The Wine
By Cianna Garrison
Stay up to date