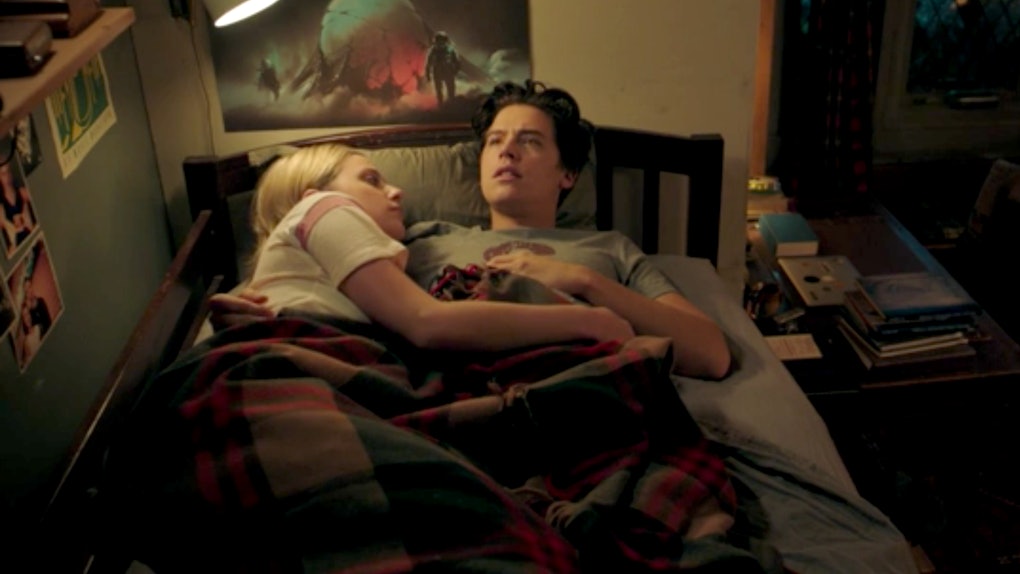 Who Is Recording Betty & Jughead On 'Riverdale'? Something Weird Is Going On

The Core Four seem a bit spread out so far in Season 4 of Riverdale, but it's starting to look like the central mystery that will bring everyone together is finally ramping up. A cliffhanger ending in the Nov. 20 episode seemed to confirm that video tapes will be at the heart of this season's action, and the true villain of Season 4 will probably be the person who is recording Betty and Jughead at the end of Riverdale's most recent episode.

Spoiler alert: This post contains spoilers from Riverdale Season 4, Episode 7, "The Ice Storm." Rather than introduce one major villain for the gang to go up against this season, so far, Season 4 has brought in individual adversaries for each of the main characters: Archie is dealing with Dodger and his dangerous family, Betty has to suss out whether her half-brother Charles is a friend or foe, Veronica is worried about her own half-sister Hermosa and her nefarious father, Cheryl is dealing with possible ghosts and pesky relatives in her mansion, and Jughead is wrapped up in a strange secret society at Stonewall Prep. That's all well and good, but it has been a hallmark of Riverdale that each season has its own big bad, be it Clifford Blossom, the Black Hood, or the Gargoyle King. With that in mind, for Season 4, it looks like the major villain will be a phantom videographer.

At the end of Episode 7, Betty and Jughead started to hook up in Jughead's dorm room, but they did not realize a camera was hiding in the corner, recording them. Of course, creepy video tapes have already popped up earlier this season — many residents of Riverdale were sent unmarked VHS tapes that contained hours of footage of their homes. But since there have been so many other shady goings-on in town, the characters just seemed to kind of forget about this particular mystery, and viewers may have also.

But the Season 4 poster made it pretty clear that video tapes will be a major element of this season; not only does the poster promise "sex, lies, videotapes," but it is also shot to resemble overexposed film footage.

Although these tapes have only been a blip on the radar in these first several episodes, it looks like they will become the new central mystery for the season very soon. So, of course, that begs the question: Who could be making these tapes, and why?

Every new character is an obvious suspect. Dodger is intent on bringing down Archie, although he was in a coma when Betty and Jughead were being recorded. Hermosa is fully loyal to her father Hiram Lodge, who would definitely pull something like this, and pretty much everyone at Stonewall Prep is still super-ominous. Charles may be the prime suspect, though, since fans know he is up to no good due to his connection to Chic, and his FBI skills would probably make him a master at surveillance. Or, then again, this could all go back to Penelope Blossom, the criminal mastermind who is still on the lam.

Fans should definitely pay close attention to see if more video tapes pop up in coming episodes of Riverdale. New episodes air Wednesdays at 8 p.m. ET on The CW.