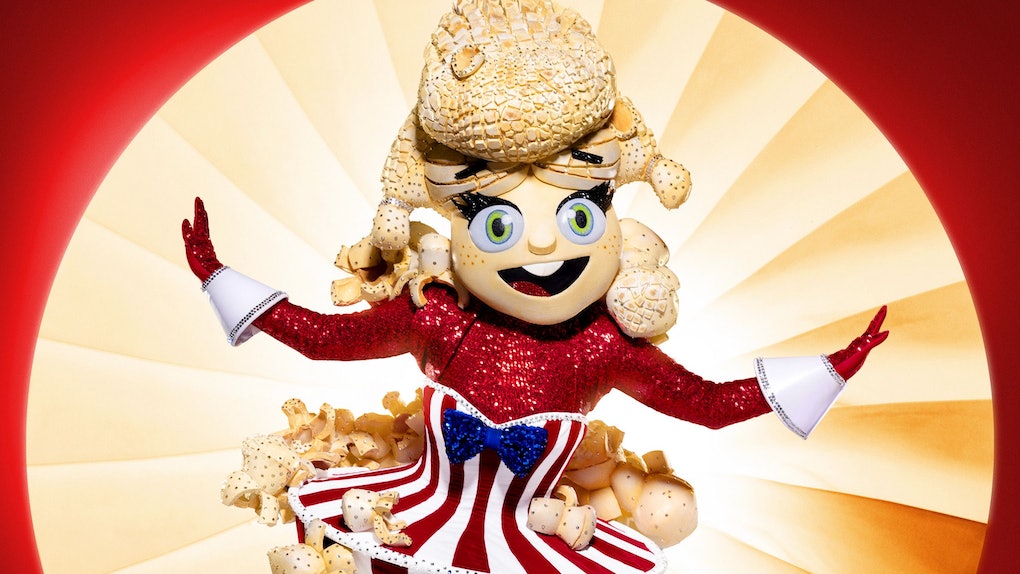 Who Is Popcorn On 'The Masked Singer'? 2 Theories That'll Have You Convinced

Host Nick Cannon opened The Masked Singer Season 4 with the most accurate line of the night: "Finally, something fun involving masks." As Group A took the stage, fans went wild with the first round of guessing who the celebrities were out of the five performances. Sun, Giraffe, Dragon, Snow Owls, and Popcorn each got a turn at the mic to show their vocal skills (or lack thereof) before it was time for the first unmasking. But with Dragon deleted, fans are left wondering, who is Popcorn on The Masked Singer? There's only a couple of celebrities fans have suggested so far.

It's rare for a contestant on the first go-round to be narrowed down so quickly. Snow Owls, for instance, as a duet team, are a narrow field simply because there aren't that many pairs of celebrity singers who would share a costume like that. But even they have several options, as fans guess everything from country singers to ice skaters.

But Popcorn arrived with first with some hints that narrowed the field. The video of clues included a Disney reference: "Mirror, mirror on the wall, what makes me the biggest miracle of all?" She wears ruby slippers, suggesting perhaps an Oz connection. And the outfit itself is red, white, and blue, so whoever is inside is someone American as apple pie... or popcorn.

Then there was the performance, which was a belting rendition of Pink's "What About Us?"

By the time Popcorn's turn on stage was over, fans had narrowed it down to two main suspects: Sofia Carson and Lacey Chabert. Carson is best known for playing Evie, the daughter of Snow White's Evil Queen on Disney's Descendants movie franchise. She's a Disney pop princess as well, having released two significant singles. The movie connection, the Snow White reference, and the all-American Disney star all point in her direction.

As for Chabert, she's a Broadway baby. (No, really, she played young Cosette in Les Misérables on Broadway back in the early 1990s.) The popcorn costume could also reference her movie career, as she was recently the voice of Gwen Stacy in The Spectacular Spider-Man. And that put her right back in the Marvel-Disney fold, another all-American pop princess.

Fans will have to pop some more snacks in the microwave while waiting for more clues to come.

More like this
8 Facts About Lisa Delcampo On 'The Circle,' AKA Lance Bass' Assistant
By Rachel Varina
A Petition To Cancel Colton Underwood's Reported Netflix Show Is Gaining Support
By Abby Monteil
Peter Weber’s Quote About How ‘Bachelor’ Producers Get Contestants To Kiss Is Wild
By Abby Monteil
Stay up to date