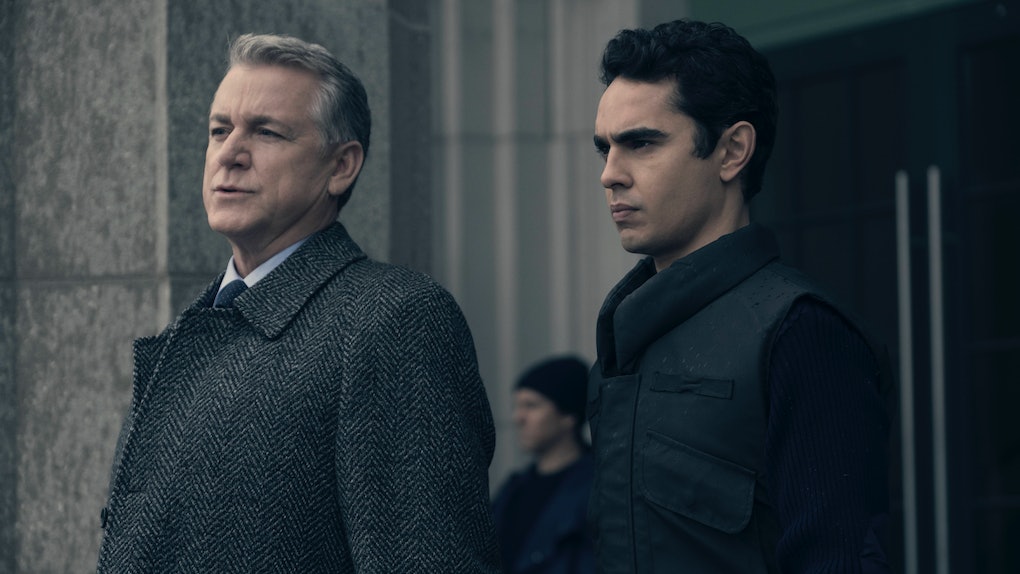 Who Is Nick Blaine In 'The Handmaid's Tale'? The Waterfords' Chauffeur Is Not What He Seems

The Handmaid's Tale is not exactly what one would call a love story. There's no traditional protagonist, no love interests, no coming of age type plot. Gilead took that all away from people when they created a society that was highly stratified and included women whose entire purpose in life was to breed children for the rich and sterile. But even in the most oppressive of situations, human hearts find a way, as Jeff Goldblum might say. And for Offred, that love interest turns out to be Nick. Who is Nick Blaine in The Handmaid's Tale? And is her really a romantic hero for Offred to pin her hopes on?

In the novels, Nick's role is unclear from the beginning. He's the chauffeur for the Waterfords, meaning he is of the "Guardian" class, foot soldiers in Gilead's army who work as servants to the Commander class. When Offred fails to conceive within the first few months, Mrs. Waterford begins to plot to have the Handmaid sleep with Nick, in hopes this will solve the infertility issue. Offred suspects Nick is an Eye (one of Gilead's secret police), partially because she views him as too casual for a Guardian, and partly because Ofglen told her there was an Eye in her household. At the end of the story, Nick suggests she is right, but that he has contacted Mayday, and the van taking her away is getting her out to freedom. Offred gets in the van, even though part of her doesn't believe him.

For those who want to make The Handmaid's Tale into a story with a happy ending, Nick is the obvious choice. In the 1990s, when Hollywood made a (pretty terrible) adaptation of the novel to film, Nick was the hero, who is telling the truth when Offred gets in that van. (It starred Faye Dunaway and Robert Duvall as the Waterfords, Natasha Richardson as Offred, and Aidan Quinn as Nick.) The ending of the film shows Offred, now in Canada, with Nick. She is happy, pregnant, and free.

The show has complicated any chance of that sort of ending by making Offred's former husband Luke a major character. But they've been a little more straightforward with Nick's character, making his Eye status more obvious from the beginning. It also has made Offred less trusting of Nick, but at the same time, it's made Nick a little more human. For instance, we get to see a little of his life before Gilead's rise, including how as a young and impressionable lad, he was recruited to join the Sons of Jacob.

Ironically, it also shows him agreeing to the idea of The Ceremony that Offred undergoes on a monthly basis.

As for what else we know about Nick, his loyalty to the Eyes is less about being a true believer, and more about it being run by the guy who originally recruited him to the cause, Andrew Pryce. After all, before Offed came along, he's revealed to be sleeping with the Martha named Beth, who the show heavily suggests is part of the Mayday rebellion, and he knows it. He also was the one who found Offred's Handmaid predecessor, after she hung herself.

At the end of the series, Beth reminds Nick about the consequences of "being sweet on a Handmaid," Then Nick finds out Offred is carrying what is most likely his child. At this point, the show suggests where his loyalties lie: with the family he's accidentally created. Did he really schedule that car from Mayday to take her and his unborn child away from the Waterfords? Is the Eye going rogue?

We'll find out when The Handmaid's Tale returns for Season 2. The show premieres on Hulu with the first two episodes on April 25, 2018.