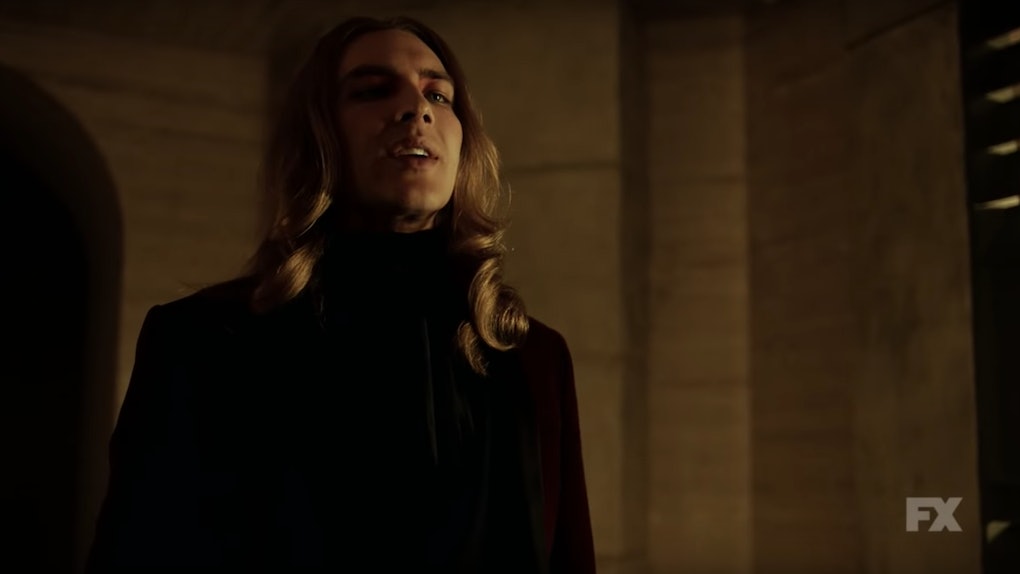 Who Is Michael Langdon On 'AHS: Apocalypse'? You May Recognize His Last Name

American Horror Story: Apocalypse finally premiered on Wednesday, Sept. 12 after months of anticipation and let me just say, it did not disappoint. The show took off right from the start, showing worldwide pandemonium as nuclear explosions killed off most of the world's population. That is, save a few notable people — like Mr. Gallant (Evan Peters), Coco (Leslie Grossman), and Timothy (AHS newcomer Kyle Allen). Quite possibly the biggest character to survive the apocalypse was one you may not have recognized, but he had a very familiar name. Who is Michael Langdon on American Horror Story: Apocalypse? You may recognize his moniker.

After the fatal nuclear explosions and radiation kills off most people on Earth, the remaining survivors are brought to Outpost Three, where they meet Ms. Wilhelmina Venable (Sarah Paulson). The main characters are known as the Purples (besides Mallory, played by Billie Lourd, who happens to be a Gray) and are told they are valuable to the preservation of the human race in the apocalypse. However, despite their rank, they must follow the rules of the house. Basically, they're under lockdown and can't leave the house for fear of nuclear contamination. They're also expected to dress accordingly in their purple attire and to never be late for dinner. (Because how can you be late when there's nothing else to do?)

At these dinners, the survivors are fed jelly-looking cubes that apparently hold all of the vitamins and minerals they need to survive. But that doesn't stop them from starving... and craving some Pirate's Booty, as Coco says. But Ms. Venable explains there's only enough resources to keep them all there for 18 months, which passes rather quickly.

Finally, at the end of the episode, we get the first concrete connection to Season 1's Murder House. A visitor comes to Outpost Three named Michael Langdon, and he explains he's there to evaluate the members of Outpost Three to see who will accompany him to a new safehouse that has resources for at least a decade. Do you recognize the name? Yep, Langdon. As in Tate Langdon.

Tate Langdon was one of the star ghosts in the Harmon house from Season 1. He's the son of Constance Langdon, the Harmon's neighbor who used to live in the Harmon home. While he fell in love with the Harmon's daughter, Violet, he also happened to have sex with Violet's mom, Vivien, impregnating her with one of her two twins. Vivien died while giving birth to the twins while in the home. One of those twins, Jeffrey, died along with her, but one survived. Yep, that one that survived was Michael Langdon. The last we saw him in Season 1, he was a toddler being looked after (I use that term loosely) by Constance.

So, what does this mean for Apocalypse? In AHS Season 1, medium Billie Dean Howard has a prophecy that a child will be conceived by a woman and a ghost that will be the antichrist and bring the "end of times." If Michael Langdon is that child, should we trust him to bring the survivors to safety? Or was he the one to bring about the apocalypse in the first place? Only time will tell.