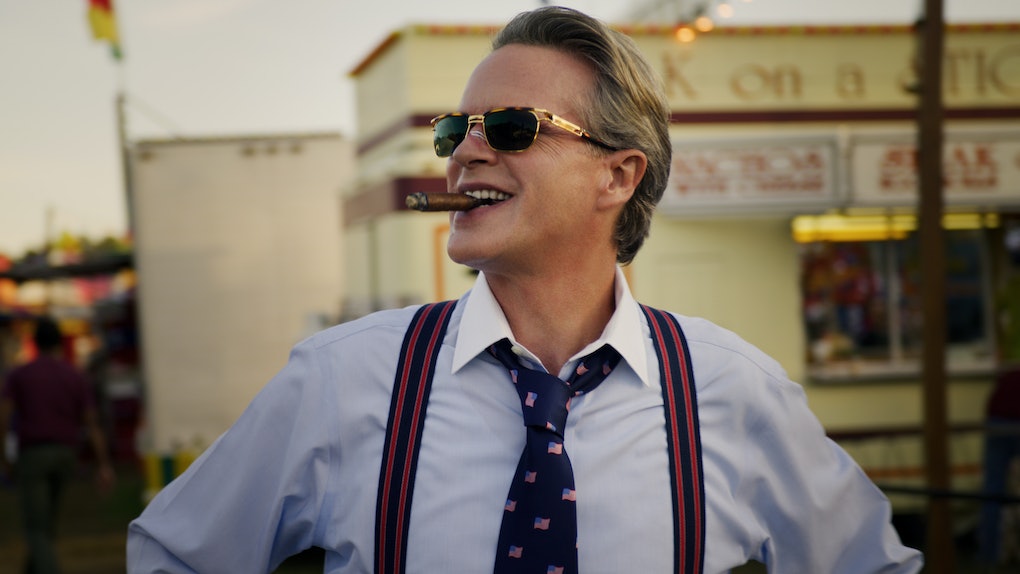 Who Is Mayor Klein On 'Stranger Things'? Cary Elwes' Character Has A Big Problem

Stranger Things loves to add 1980s era stars in guest spots. Season 1, for example, cast Winona Ryder who rose to fame in Heathers, and Matthew Modine, famous for Full Metal Jacket and VisionQuest. Season 2 added Sean Astin (The Goonies) and Paul Reiser (Alien). Season 3's addition is Cary Elwes (The Princess Bride). His character, Mayor Larry Klein, helps expand the world of Hawkins, Indiana into the political realm, as choices made by this glad-hander don't always have the outcome he expects. So who is Mayor Klein on Stranger Things? Warning: Spoilers for Stranger Things 3 follow.

Elwes' character was described as "handsome, slick and sleazy… your classic '80s politician — more concerned with his own image than with the people of the small town he governs." That's all driven home the first time viewers meet him when Hopper is called to Klein's office.

Klein wants Hopper to disperse the crowd protesting the fact that the Starcourt Mall is killing jobs on Main Street and arrest those who won't leave. Hopper feels for them – for one thing, Joyce's store has no customers now. But when he tries to explain that democratic expression is legal and arresting his constituents is a bad look, Klein counters "not without a permit, it's not." And besides, he's got a big fireworks display for the Fourth of July. No one will remember the arrests, just the party. Hopper finds himself arresting people who complain that Klein is snatching up their jobs and their farmland.

But Klein's desire to keep protestors off the streets isn't just about his image as a mayor. When Hopper later gets beaten up by a motorcycle-riding assassin he saw exiting Klein's office that same day, he puts two and two together. A confrontation in Klein's office reveals it's worse than Hopper thought. It's not that Klein is working for evil people, as much as he's being forced to go along with their plans.

Klein doesn't even know who these people are, or anyone's name. He just knows the man who was in his office works for Starcourt Mall. When Hopper doesn't believe him, Klein proves it. The group who own Starcourt have not just blackmailed him into selling them the land where they built the mall, but East Hawkins, where they've been buying up farmland left and right, all of which are areas right around where Hawkins Lab used to be. Turns out the protestor Hopper arrested the other day was on to something.

It turns out Klein is so afraid of these people, he's been keeping the copies of the deeds of sale for these farms in a safe in his bedroom. He figures things are going to go sideways, and he wants to be able to turn state's evidence when it does.

What Klein doesn't know, or will not admit to himself, is that these people who own the mall are Russian agents. The farms are being turned into secret energy stations, which are powering the base beneath Starcourt Mall. And all that juice is going towards one purpose: Opening the Upside Down.

The Mayor signed away not just the jobs, but the lives of his voters. Fireworks aren't going to fix that.