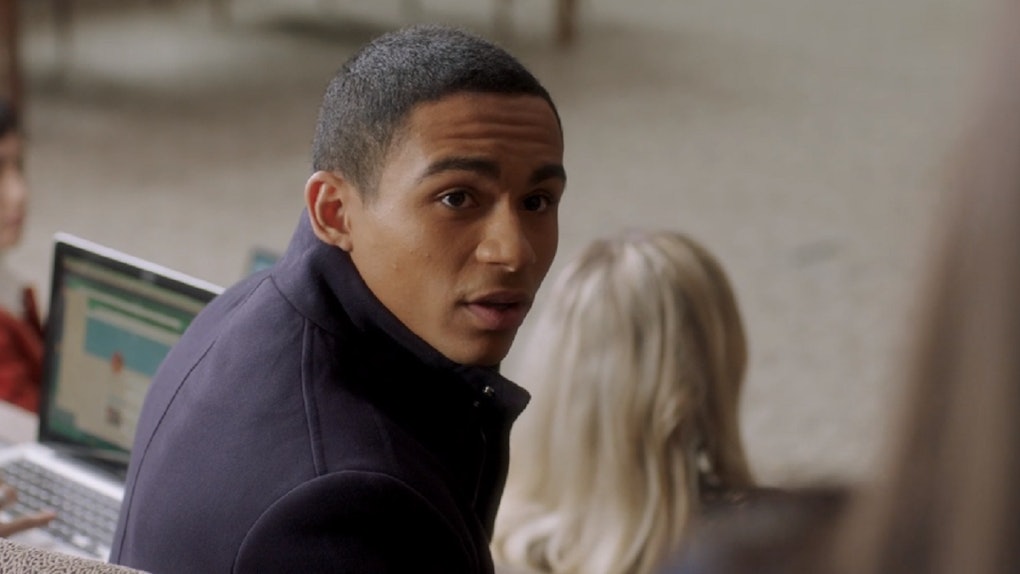 Who Is Mason On 'The Perfectionists'? Nolan's Old Friend Might Be Connected To His Death

This post contains spoilers for Pretty Little Liars: The Perfectionists. Before he was mysteriously murdered on The Perfectionists, Nolan Hotchkiss was essentially the typical evil genius who regularly cons people into friendship. His perfect, albeit posing, posse of Ava, Caitlin, and Dylan is still trying to track down answers about his death before someone learns about their own involvement, and in April 3's episode, they reached an intriguing possibility. Who is Mason on The Perfectionists? Nolan's former best friend might have had a role in his murder.

ICYMI, Mason first appeared in last week's "Sex, Lies and Alibis" at Nolan's funeral. The childhood friends drifted apart when they started college and Nolan (Chris Mason) supposedly stole Mason's (Noah Gray-Cabey) then-girlfriend Caitlin (Sydney Park). Given that background, Caitlin, Ava (Sofia Carson), and Dylan (Eli Brown) believed that Mason's teary-eyed appearance at the funeral was a bit too much. Later on, Mason offered to validate Caitlin's alibi if she needed proof she didn't kill Nolan. According to him, everybody needed a solid excuse until the real murderer was discovered.

The show has implied that Mason was unaware of Nolan and Caitlin faking their relationship, but he still had an idea of how malicious Nolan could be. In April 3's "...If One of Them Is Dead," he caused a stir when he sat in Nolan's old seat in Alison's (Sasha Pieterse) class. When Alison confronted him about the insensitive move, Mason claimed it was what Nolan would've wanted and expected from him.

He also opened up about always being the runner-up to Nolan's excellence and enjoying the benefits that came with being close to him. But after Nolan changed as college continued, he took both Caitlin and friendship perks away from Mason. This definitely suggests that Mason understood the extent of Nolan's power just as well as the trio did.

In Alison's own investigation of Nolan's life, a yearbook photo of Nolan and Mason led her to find the cabin where Nolan previously met with his sister Taylor (Hayley Erin), who everyone else still believes is dead. Having followed Nolan to his meeting with whom she could only identify as a blonde woman, Ava took Dylan and Caitlin to the cabin and unexpectedly met Alison there. Taylor Hotchkiss was nowhere in sight, keeping her cover in place for now, but a clue pointing to someone closely affiliated with the family popped up.

In the cabin, Dylan found the same kind of gum wrapper the trio spotted in the woods near where they talked about how they'd kill Nolan. Caitlin dismissed the similarity as a coincidence, but when she ran into Mason on campus soon after, she realized he used the same gum. Chances are that he's the one who kept an eye on the kids in the woods. It's also likely that he has visited Nolan's cabin before, possibly searching for secrets.

So, does this increase Mason's chances of being the killer? From a logistical view, it's certainly possible. The character didn't appear in the pilot, meaning that we don't know where he was at the time of Nolan's death. Plus, if Mason never knew that Nolan and Caitlin were together to present a facade, maybe he never got over Nolan stealing her away. Did Nolan have secrets about Mason that prevented the latter from trying to win back Caitlin? We'll have to wait for more details, but Mason could definitely have believable motives for killing his former friend.

Season 1 of Pretty Little Liars: The Perfectionists continues on Wednesday, April 10, at 8 p.m. ET on Freeform.