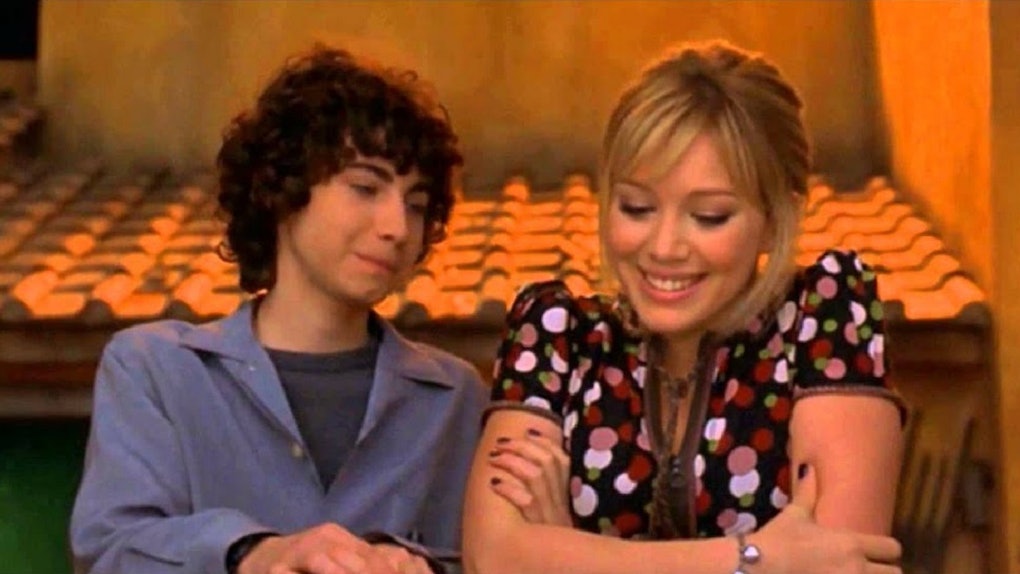 Who Is Lizzie McGuire's Fiancé In The Reboot? Fans Might Be Disappointed

They say you can't go home again, but in the case of Disney Channel legend Hilary Duff, she's returning to her roots on an upcoming Lizzie McGuire revival. Instead of freaking out about boyfriends and bras, a grown Lizzie will now deal with a dream job and a fiancé, but she won't be making wedding plans alongside a familiar face. Hilary Duff has spilled that Lizzie isn't planning a future with best friend-turned-love-interest Gordo, and this bombshell has fans wondering: Who is Lizzie McGuire's fiancé in the reboot? His identity is a mystery for now, but viewers shouldn't rule out Gordo's shot at love with Lizzie just yet.

In case you were busy roaming Rome or sneaking out to a see a forbidden movie, Duff revealed on Aug. 23 that her beloved Disney Channel character would return for her own Disney+ series. "I am beyond excited to be home again, back with my girl ... and into her 30s," Duff wrote in an Instagram post. Having originated the role of aspiring popular kid Lizzie McGuire in the early 2000s TV series, Duff will step back into Lizzie's shoes as a 30-year-old navigating life in New York City.

Disney has also announced Lizzie is now engaged, and confirmed the mystery man is not Gordo (Adam Lamberg), Lizzie's loyal bestie who she finally kissed at the end of 2003's The Lizzie McGuire Movie. More than 15 years later, I'm still dreaming about a romantic rooftop smooch with a curly-haired guy.

Sure, the probability of marrying your middle school boyfriend is slim, but nothing comes between Disney Channel fans and their shipping. While Duff hasn't spilled any further details about Lizzie's love life, she did reveal to Vulture that she doesn't mind the idea of Lizzie and Gordo having drifted apart.

"You know what, I don’t know if I was as devastated by that," she said. "I feel like them not being together is what was so good … it’s that one person that you’re like, 'Was he the one? Is it ever going to be?' You’re always kind of wondering. We wanted it to hurt everyone a little bit, and it’ll continue to hurt."

But stay strong, shippers, because it seems like Duff is hinting at a potential reunion between Lizzie and Gordo in the revival. Although Disney+ hasn't confirmed whether other Lizzie McGuire actors are joining the series, Duff told Vulture that Lamberg's presence would certainly be appreciated. "I really hope he’s going to be involved," she said. "We’ve been planning out the season and coming up with what everything looks like, and it’s so important for him to be there for part of it."

Duff's other tidbits about the series fueled even more theories about a rekindled romance with Gordo. "She’s not going to stay in Brooklyn too long, actually," Duff said. "That’s where she’s been, but she’ll be coming back to Los Angeles. She’s forced out of New York. She’s like, 'I can’t be here anymore.'"

Is a hometown reunion in store for Lizzie, Gordo, and their other buddy Miranda (Lalaine)? I have my fingers crossed, but even just seeing Lizzie live her dreams as an interior designer's apprentice will suffice. Just as Lizzie guided a generation of girls through crushes and homework, Duff is ready for her alter ego to guide these grown women through different milestones on the revival.

"That’s what people loved about Lizzie so much — that phase of becoming a teenager," Duff told Vulture. "It’s such a complicated but fun part of time to navigate. She was everyone’s best friend. She was faced with every challenge that was relatable. Now, I think stepping into the role as a 30-year-old trying to navigate life is equally interesting."

Disney+ has yet to announce a premiere date for the Lizzie McGuire revival.