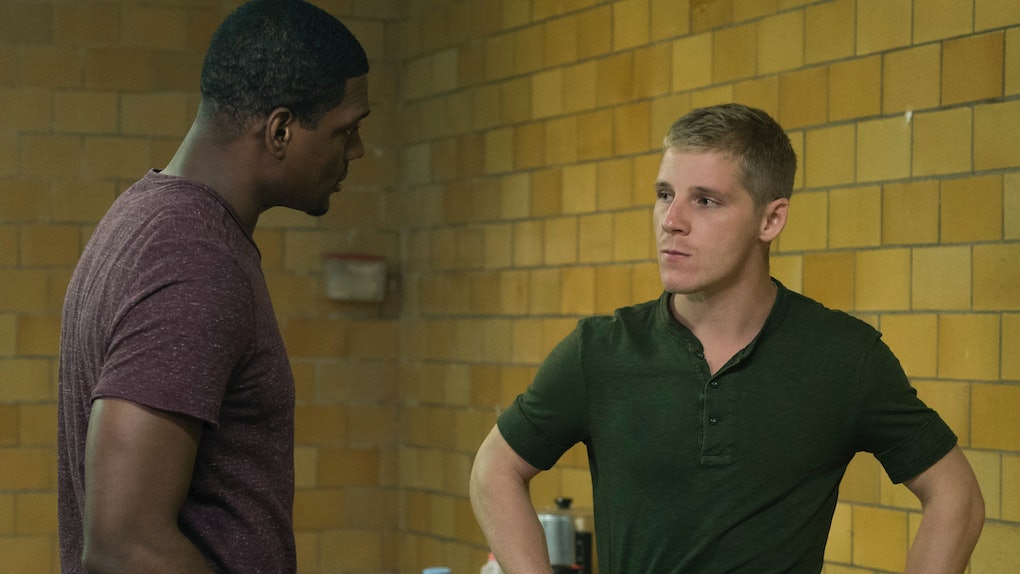 Who Is Lewis On 'The Punisher'? The Heartbreaking Character Plays A Major Role

The Punisher is full of characters who were beaten down by the horrors of war, but the clearest and most troubling example of post-traumatic stress disorder and soldiers trying to re-insert themselves into civilian society comes in the new character of Lewis Wilson. Although at least initially, the young veteran's story remains separate from the main plot of the Punisher's quest for vengeance against the military terrorist cell that ruined his life, Lewis' story is really at the core of The Punisher's appeal and importance. So who is Lewis on The Punisher, and why will his story resonate with so many former military servicemen? Let's talk about the complex new character.

Spoiler alert: This post will discuss plot points up to and through Episode 7 of The Punisher, "Crosshairs." We first meet Lewis at one of Curtis' group therapy sessions in the first episode. Curtis has been running these talk therapy circles for fellow veterans to help ease the difficult transition from life at war to civilian life. But it is clear from the get-go that just talking out his issues was not going to be enough to help Lewis.

Lewis lives at his father's home (we later learn that his mother died a while back), and Lewis' PTSD reaches a dangerous level early on when he awakens frightened from a dream and quickly reaches for and fires his gun at the stairwell that his father was walking down. Weirdly enough, his dad is pretty understanding and okay with being shot at by his son. Lewis starts displaying more and more troubling behavior, including digging a foxhole in his back yard and sleeping out there instead of in his bed, claiming that it is the only place he can sleep comfortably any more.

Over the next couple of episodes, Lewis continues to struggle to find a place for himself in society now that he is no longer in the army. First, he enlists to join Billy Russo's private military firm Anvil. Although he performs incredibly well in the training tests, Billy confronts him about the foxhole in his yard and his worry that Lewis is probably too messed up from his recent experience in the battlefield to return to service right away. As you might imagine, Lewis takes this rejection hard, and turns to a disgruntled veteran in Curtis' group who is known for spouting rants about how bad life is for veterans and how they need to work to change that... all mixed in with a bunch of pro-gun, anti-liberal tirades that seems all to familiar on certain areas of the internet these days. Lewis joins O'Connor in a two-person protest in support of the second amendment, but when a police officer abuses his power to tackle and arrest Lewis, he sees O'Connor for what he really is.

Curtis later confirms to Lewis that O'Connor was never actually deployed, and made up a bunch of stories about his time in the military to galvanize his radical message. This news sets Lewis off on yet another level of unhinged danger, as he loses his cool while confronting O'Connor about the lies and finds himself violently and repeatedly stabbing his former friend until he dies.

The reason that Lewis' story is so important and will likely resonate with many veterans is due to the fact that re-assimilation is such a common and difficult process for so many military men and women, but one that never gets much attention in movies of TV shows. Obviously, Lewis' story becomes a more exaggerated and dramatic portrayal of PTSD, but the struggle to find a place in society after spending years in the completely different world of international warfare is one that every veteran has felt deeply.