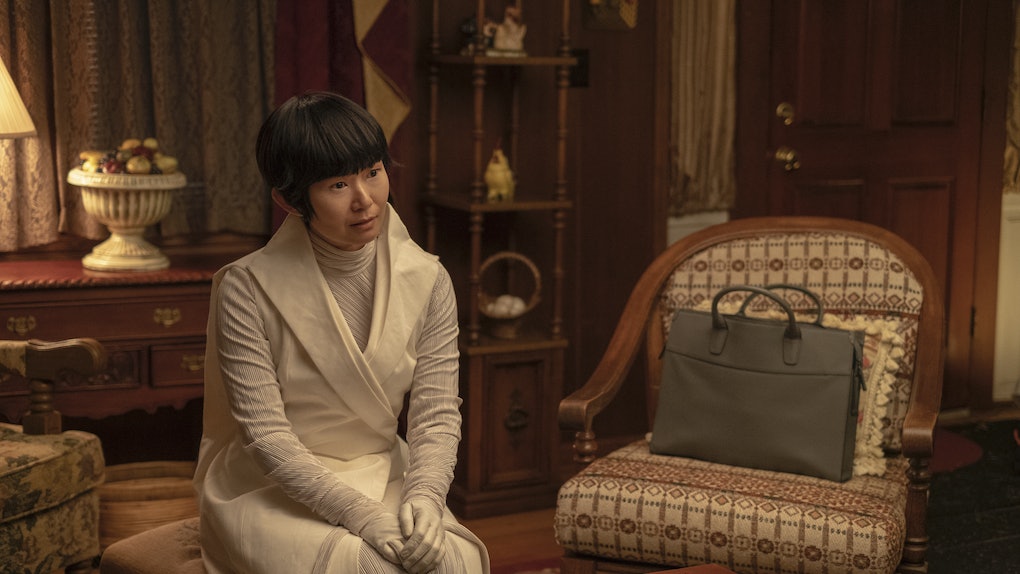 Who Is Lady Trieu On 'Watchmen'? This Trillionaire Knows More Than She’s Letting On

Watchmen spent Episode 3 bringing back old faces from the comics. Episode 4, "If You Don't Like My Story, Write Your Own," brings in a character viewers have been hearing about, but so far haven't seen. Lady Trieu, the reclusive trillionaire, who sends out servants to buy copies of every paper, bought up Veidt's company after he died. She's also the one building the mysterious "Millennium Clock" Blake and Petey flew over on their way to Tulsa. So who is Lady Trieu on Watchmen? She may be the most ruthless character yet. Warning: Spoilers for Watchmen follow.

Trieu's opening scene is mesmerizing. In the Tulsa countryside, a farmer and his wife sell eggs at a roadside stand. When night falls, they tuck up for the evening, until there is a knock at the door. Trieu walks in, sits down, says she wants three minutes of their time and starts a clock.

She wants their house and land, right now. They balk. It's their family legacy, the wife insists, it's not for sale.

Oh, but it is. Trieu knows they're not childless by choice. Their IVF attempts failed. She got her hands on those eggs, and here is their son. They can have him, and $5 million, if they say yes before the clock runs out. It is utter emotional blackmail, but there's no time to think. The moment the father takes the baby, she's already won.

It's an instructive scene, letting audiences know what Angela and Blake are up against when they team up to visit Trieu Industries. Blake figured out the SUV wasn't taken (or returned) by Doctor Manhattan, but by one of Trieu's ships. She doesn't know for sure the elderly suspect in a wheelchair was in the car when it disappeared, but she's guessing he was.

In the casual "let me show off my Vietnamese language skills banter" that follows, Trieu pointedly tells Angela her grandfather wants to know if she found the bottle of pills in the glove compartment. Angela's response is to tell her grandfather something unprintable.

While they're there, Trieu also shows off the golden statue she keeps of Veidt. Her "Millenium Clock" (which she told the farmer's wife is much than just a clock) was inspired "from the seed of his inspiration." But the statue is not from his heyday. It's carved to resemble how he looks now.

Trieu's message to Angela is a confession she's in cahoots with Reeves, and Blake's guess about the SUV was correct. But the show still goes back at the very end of the hour to confirm he's there, in her sanctuary, hoping the breadcrumbs he's left Angela are enough to guide her. There's just one thing — the wheelchair was a ruse too. Will Reeves can walk just fine, and he's all in on whatever Lady Trieu is planning.