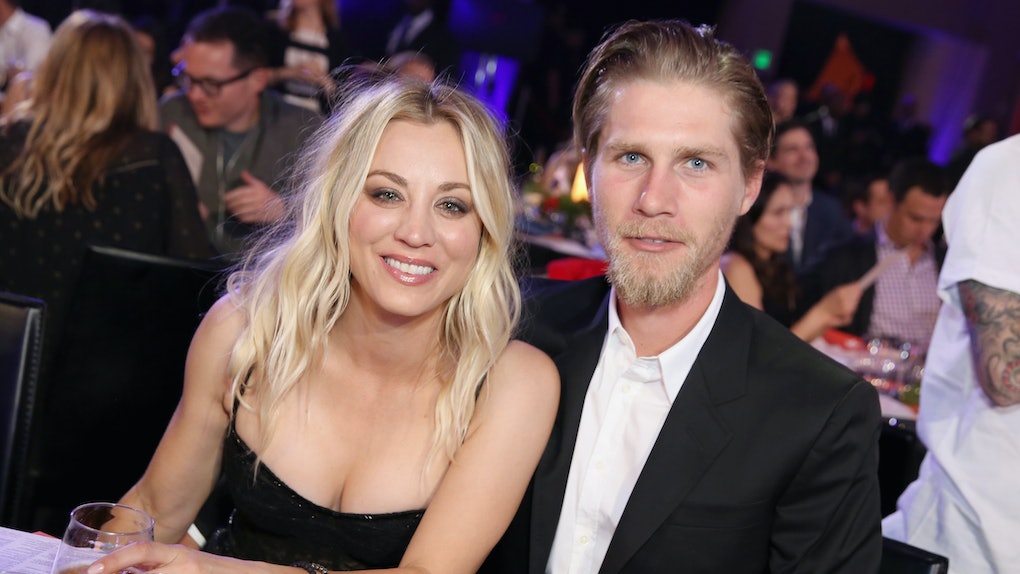 Who Is Kaley Cuoco's Husband? Karl Cook Has A Love For Horses

As the final season of The Big Bang Theory winds down, we can expect to see its longtime star Kaley Cuoco make her way through nostalgic talk show appearances and magazine interviews throughout 2019. Over the course of the comedy's 12 seasons, Cuoco has experienced plenty of personal highs and lows, but 2018 included her marriage to someone out of the Hollywood spotlight. Who is Kaley Cuoco's husband? Equestrian Karl Cook will likely be at her side when the star attends the 2019 Golden Globe Awards on Jan. 6.

Following the 2016 finalization of her divorce from first husband Ryan Sweeting, rumors of Cuoco dating Cook began later that year. Cook proposed to her on her 32nd birthday in 2017, capturing her emotional reaction in a video he shared on Instagram. The couple married on June 30, 2018, and neither of them are shy about expressing their love for each other on social media.

While celebrities marrying non-actors isn't uncommon in Hollywood, such a match usually means that the public doesn't know too much about their favorite actor's spouse. If you've loved Cuoco since her days as a rebellious teen on 8 Simple Rules but are still a little unsure about who Cook is, we've got you covered. Hopefully by the time you've made it through our facts below, spotting Cook and Cuoco on the Golden Globes red carpet will just feel like seeing old, familiar friends. Read on to find out what Cook does with his time.

1. He Regularly Competes As An Equestrian

In 2016, Cook and his horse Farrari took home the blue ribbon and a hefty amount of prize money in the SmartPak Grand Prix and the UltrOz Jumper competitions. He also appears to work with horse breeding company Pomponio Ranch Stallions, which is mentioned in his Instagram bio. Like with anyone in an athletic career, he reached these milestones after struggling and briefly considering leaving the sport. In 2012, the quality of his riding performance was staggering and his horses weren't at their physical peak, but Cook's love for the equestrian lifestyle trumped his insecurities. At the time, he told The Chronicle of the Horse, "It sounds silly, but I didn’t know how to do anything else. I really didn’t want to go to school, so it was either that and be very unhappy, or really get after riding."

Seeing as he and Cuoco share a love for horses and some of their wedding photos were even taken in a stable, I think it's safe to say that Cook is happy with his choice.

2. He's The Son of A Billionaire

According to Forbes, Cook's father Scott Cook is estimated to be worth $3.2 billion after serving as co-founder of the software company Intuit, which created TurboTax and QuickBooks. The elder Cook was even an early investor in Snapchat, proving that he's definitely down with the kids. His wife Signe also launched her own software start-up in the '80s, so if Cuoco and Cook ever have kids, Grandma and Grandpa will probably spoil them with computer coding kits.

3. He Gets Creative In The Kitchen

This summer, Cuoco told her followers that she scheduled a shoulder surgery days after her wedding, prompting Cook to play the role of nurse. He took to Instagram to share a picture of the papaya and avocado bites he made for a recovering Cuoco, but Cook's special visual touches aren't limited to food. E! News previously reported that Cook spoke about a love of photography and woodworking in a 2010 interview with a sports publication. The couples that are creative together stay together, right?

In a March 2017 Instagram post, Cuoco revealed that Cook had visited the Big Bang Theory set and cuddled up to her costar and ex-boyfriend Johnny Galecki. Cuoco followed that pic with another of her kissing Cook in the same spot, writing, "Can you tell I ❤️when this guy comes to visit me at work?!"

While not all of our work situations involve a cozy TV studio and longtime costars, it's good to know that Cuoco is comfortable enough for Cook to stop by The Big Bang Theory. Galecki, Mayim Bialik, and Will Wheaton all attended the couple's wedding last summer, proving that Cook has definitely won over the cast's hearts as well as Cuoco's.

Here's to hopefully spotting Cook with the Big Bang Theory gang at the Golden Globes! The 76th Golden Globe Awards air at 8 p.m. ET on Sunday, Jan. 6, on NBC.