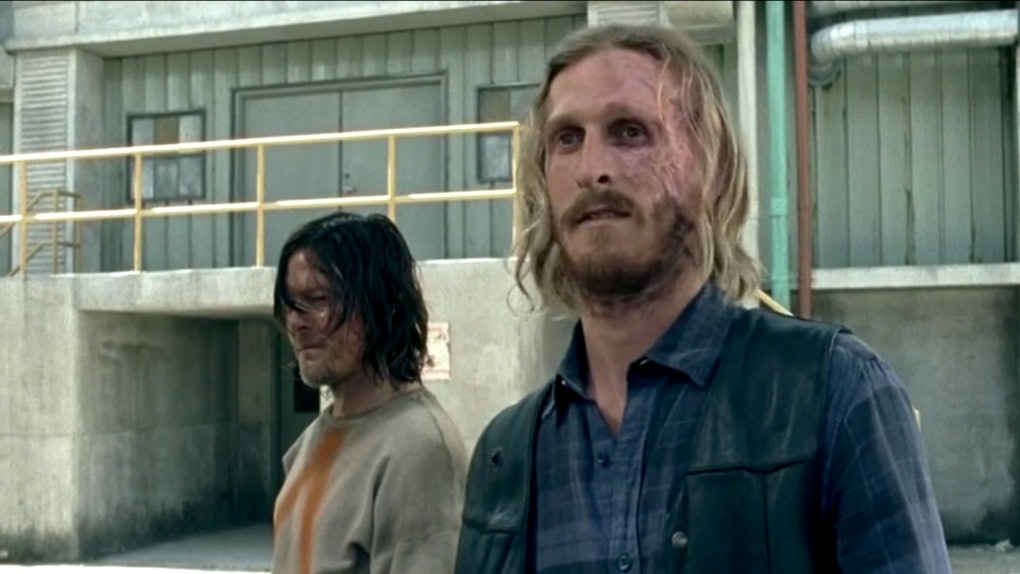 Who Is John Bernecker? ‘The Walking Dead’ Paid Tribute To Him During The Season 8 Premiere

The Walking Dead viewers are used to completely depressing moments, but the show's Season 8 premiere on Sunday night ended on a particularly heart-rending, all-too-real moment, which was not even part of the zombified world of the AMC drama. The new episode ended with a touching tribute to John Bernecker, a stuntman who died while filming for the new season back in the summer. To understand the full impact of the tribute, read on to get all the details about what happened with Bernecker and the upsetting fallout afterwards.

The incident went down on July 12, when John Bernecker head-first fell 22 feet from balcony on the set and reportedly missed the padding below. The death was particularly curious when given how relatively simple the stunt was and how experienced Bernecker was a stuntman. Bernecker had 93 credits as a stuntman on major films and TV shows, and had even served as a stunt coordinator on a number of projects. Production on Season 8 of The Walking Dead shut down for a week following Bernecker's death on the set.

Those close to Bernecker are especially suspicious as to how the experienced stuntman could die from one of the easiest stunts he had ever performed. His girlfriend Jennifer Cocker, who is also a professional stuntwoman, didn't understand why Bernecker was on the balcony alongside an actor inexperienced in stunt work, pointing to reports that Bernecker was next to Walking Dead star Austin Amelio (who plays Dwight) right before his lethal fall. Bernecker's mother Susan filed a lawsuit against the show following her son's death, according to Variety. Her lawyer stated that "accidents like that do not happen on a production without some mistake being made."

Although the controversy over the death continues, the cast and crew of the show have paid tribute to John Bernecker a number of times since his death about three months ago. When members of the main cast and showrunner Scott Gimple attended San Diego Comic Con shortly after the death, they observed a moment of silence in memory of the fallen stuntman and Gimple read a statement in honor of Bernecker at the start of the show's panel:

John passed away this week after he was injured doing something he loved: helping tell stories that excite, entertain, and give people escape. He helped make movies and shows for people like everybody in this room. John was someone who was beloved in the stunt community, who helped train people and helped them break into the business He was living his dream, and he helped other people do the same.

As evidenced by the season premiere tribute, The Walking Dead team is clearly invested in honoring John Bernecker's work on the show. It's still unclear what will happen with the scene that ultimately led to Bernecker's death, which apparently involves the character of Dwight on a balcony and occurs later this season. Production had been going on for about two and a half months prior to Bernecker's death on the set, so it's likely that the scene in question will not be seen until the middle or latter half of the new season, if it still airs at all, that is.

John Bernecker has worked consistently and extensively in stunts since 2009, including work on major motion pictures such as The Hunger Games series, Logan, 22 Jump Street, and Get Out. He will posthumously appear as a stunt worker in a number of movies coming out next year, most notably Marvel's highly anticipated Black Panther.

Season 8 of The Walking Dead will consist of 16 episodes, airing Sunday nights at 9 p.m. ET on AMC.