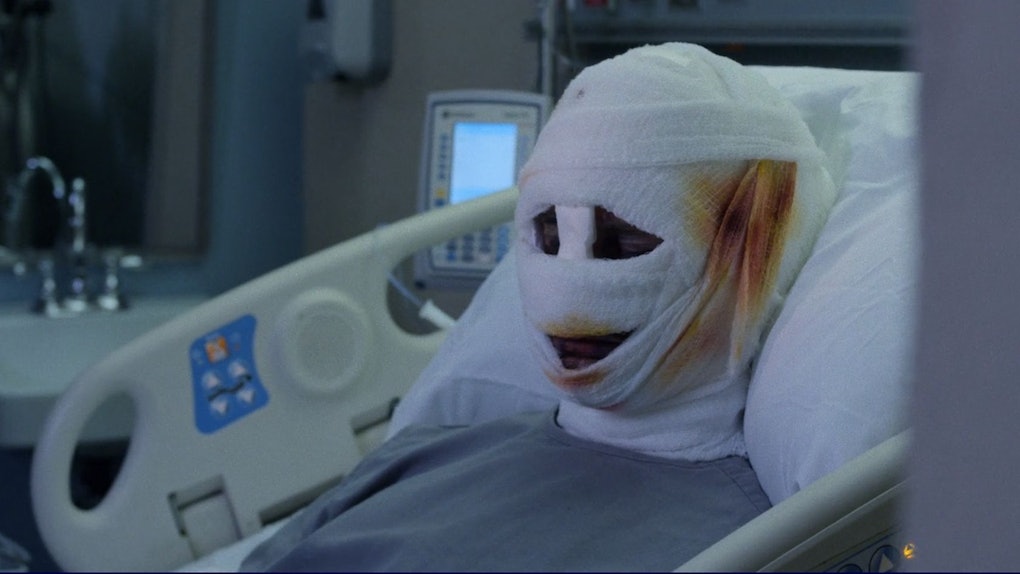 Who Is Jigsaw In Marvel Comics? 'The Punisher' Reveals His Backstory

The reveal at the end of The Punisher that this was an origin story the whole time is one of the best moments of the whole season. After 12 and a half episodes, in which we thought this was really a story about Frank Castle, going about doing his punishing routine, it was all actually leading up to introducing one of Marvel's biggest villains. But who is Jigsaw in the Marvel Comics? Warning: This post contains spoilers for The Punisher Season 1.

Jigsaw first turned up about a year after The Punisher was first introduced to the world, but it wasn't in a Punisher comic story. It was an issue ofThe Amazing Spider-man, one that happened to include Frank Castle as a supporting cross over character. (Also in that comic? The X-Men's Nightcrawler. He and Castle are buds apparently.

There are a lot of differences between Jigsaw the comic character and the one we meet here. Most importantly, in the original version of the character, he's not a marine at all, nor does he have any sort of military training. That puts him at a constant disadvantage to Castle's character.

Billy Russo isn't an orphan, as he was in the Netflix series, though his mother was sort of neglectful. He wound up a small time gangster, under the name of "Billy the Beaut." At least they have looks in common.

Here's another thing they have in common: a connection to the Massacre at Central Park. In the comics, Billy didn't kill them, but he is the one working hush up the murder of the Castle family, on the orders of a much larger gangster. He tries to kill Frank Castle, but fails. In retaliation, Castle pushes him through a huge plate glass window. His beautiful face is destroyed, turning him into the super villain known as "Jigsaw," with his face covered in a cross of scars.

The show changes this up a bit. Billy is trying to kill Castle not to cover up the Massacre, but the heroin trade from Kanadahar that lead to the massacre. A small, but important distinction. Also, our Russo was a marine, and his betrayed Castle, his brother in arms. This show down at the end is basically their personal vendetta against each other, splattering blood all over the Carousel at Central Park.

Instead of a plate glass window, Frank instead first shoots Russo in the cheek (by accident, but still) and then smashes his face over and over into one of the broken mirrors of the carousel. It references all those time we saw Frank staring into the mirror, coming to terms with who he is now. As Castle says, now it's Russo's turn to be haunted whenever he looks at his reflection.

So why is this such an exciting turn of events? Because, though Jigsaw is The Punisher's main adversary throughout the series, he was such a popular foe, he crossed over with several other properties, including (but not limited to!):

The possibilities this opens up are huge. For the first time, we have a character who could tie the ABC Marvel TV series back to the Netflix TV seriesm uniting at least all the small screen characters, even if they're never allowed to infiltrate the movies.

Speaking of the movies! Black Widow stand alone anyone, with Jigsaw as a villain? Or how about Phase V being The New Avengers, giving us a chance to actually cross movies and TV over with each other? There are so many ideas this could bring to the table. If nothing else, he seems like a no-brainer for The Defenders Season 2's Big Bad, no?

More like this
These Tweets About Regé-Jean Page Leaving 'Bridgerton' Are Royal Bummers
By Cianna Garrison
Netflix Renewed 'Bridgerton' For Seasons 3 & 4, Likely With More To Come
By Ani Bundel
Kyla-Drew On 'Dad Stop Embarrassing Me!', College Life, & Michelle Obama
By Dylan Kickham
Stay up to date