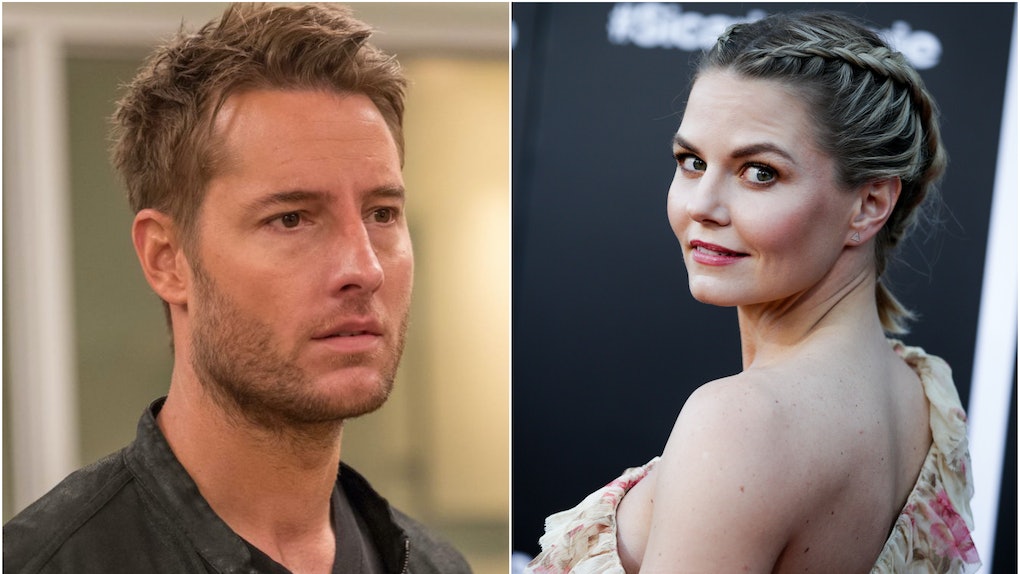 Who Is Jennifer Morrison Playing On 'This Is Us'? Fans Already Have Their Guesses

This Is Us has developed a reputation for casting well-known guest stars to play pivotal roles in the Pearson family saga. Only a few months ahead of its Season 4 premiere, the hit drama has enlisted another big name for an upcoming role, and although character details are not public, fans have an inkling of who the mystery person could be. Who is Jennifer Morrison playing on This Is Us? The Once Upon a Time alum has signed on to play a "major recurring role."

TVLine reports that Morrison, best known for playing Emma Swan in ABC's popular fantasy drama, will appear in Season 4 of This Is Us in a "substantial" role. No surprise, but any other hints about the character are essentially under lock and key for now. Knowing This Is Us' penchant for unexpected twists, even the most solid guess may be incorrect, but viewers suspect that Morrison's role could provide answers to one of the Season 3 finale's biggest mysteries. While the present-day Pearsons all faced new chapters in their lives, the episode's final scene jumped to the family's somewhat distant future.

The flash-forward segment first confirmed that Beth (Susan Kelechi Watson) and Randall (Sterling K. Pearson) were still married and fueled further suspicion about Toby (Chris Sullivan) and Kate's (Chrissy Metz) marital status. While an elderly Rebecca (Mandy Moore) was revealed as physically ailing, an unseen Kevin (Justin Hartley) now had a young son. Seeing as Kevin had just broken up with Zoe (Melanie Liburd) in 2019, fans wondered who this child's mom was and what the nature of her relationship to Kevin was like.

Morrison could very well be a brand new character This Is Us hasn't referenced yet, but given her physical similarity to the blonde Pearson boy, her playing Kevin's future love interest is fans' most popular theory. The pattern of Kevin's relationships each only lasting a season has become comical, so perhaps the hints that Morrison will play a significant character mean that she'll be on This Is Us for more than just a year.

However, some fans also believe it's too soon for the mother of Kevin's child to enter the Pearsons' timeline. The glimpse into their future is about 15 to 20 years after 2019, meaning that Kevin's son, who looked anywhere between 10 and 13 years old, wouldn't even be conceived for another few years. This Is Us was previously renewed for three more seasons, and showrunner Isaac Aptaker and creator Dan Fogelman have implied that they plan to end the series after Season 6. The show doesn't exactly rush to answer new questions, so it would be a little odd for This Is Us to introduce Kevin's possible love so soon after that Season 3 revelation. If this is the case, the reveal of the mother may be more of Season 5 material.

On Reddit, other character possibilities that fans have suggested include Rebecca's sister, young Nicky's (Michael Angarano) love interest, Rebecca's future caretaker, and Tess's (Iantha Richardson) future wife or girlfriend. These guesses are all valid, but each have a questionable quality to them. Rebecca has never mentioned having siblings, while Nicky wasn't exactly in the right mental state for a relationship once he returned from Vietnam. Unless a caretaker turns out to be romantically involved with Kevin, it's difficult to see why the character would be as notable as reports tease, and adult Tess's love interest becoming important also seems unlikely at this point.

Fans will have to wait for what kind of role Morrison will play on the series. Metz has previously teased that Season 4 will begin about five months after the events of the Season 3 finale, so here's to hopefully gaining clarity soon. Season 4 of This Is Us premieres at 9 p.m. ET on Tuesday, Sept. 24, on NBC.

More like this
Will Amelia & Link Get Married On 'Grey's Anatomy'? Their Relationship Is Solid
By Abby Monteil
These Fake 'Riverdale' Brand Names Are Even Better Than The Real Thing
By Rachel Varina
The 'Glee' Cast's Tribute To Naya Rivera At The 2021 GLAAD Media Awards Was So Moving
By Abby Monteil
Stay up to date