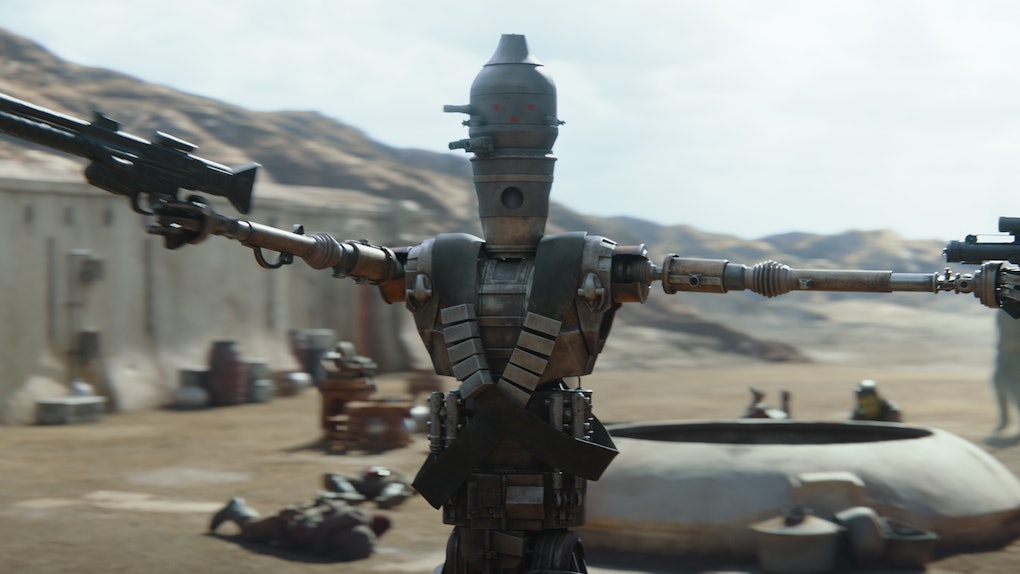 Who Is IG-11 On 'The Mandalorian'? Fans Have Already Fallen In Love

As long as Star Wars has been around, there have been droids. From R2-D2 and C-3PO in Star Wars: A New Hope to BB-8 and D-0 in the upcoming Star Wars: The Rise of Skywalker, droids are standard characters. But not everyone is a fan. Han Solo found Threepio to be utterly irritating, Finn has found BB-8 to be supremely frustrating. In the new show, The Mandalorian, the title character makes his dislike of droids clear from the outset. But IG-11 may be the exception. So who is IG-11 on The Mandalorian? Warning: Spoilers for The Mandalorian Season 1 follow.

The main character in the series, the Mandalorian, is a bounty hunter. As such, the first episode sees him sent on a specialized assignment to retrieve a specific target and bring that person in, alive.

It's an unusual mission. The Client is ex-Empire, with a small detail of Stormtroopers loyally protecting him. There's no "puck" with a picture of the quarry, just a fob that will help lead the Mandalorian to them. When the Mandalorian arrives at his destination, he runs into a local who grumps that every bounty hunter this side of the galaxy has come to the planet trying to get whoever it is bunkered down here. Every single one has died trying too.

When the Mandalorian arrives at the bunker, he discovers he's been beaten to the punch. There's a Bounty Hunter droid already there named IG-11 (Taika Waititi, aka Korg from Thor: Ragnarok).

IG-11 is no slouch at this job. He's good enough to have been accepted into the Bounty Hunter's Guild. But that makes this even stranger. Guild laws say only one member at a time can be after a specific quarry. But the Mandalorian can see they're both outgunned and outmanned. He needs a partner if he's going to survive.

He just wishes his partner wouldn't keep putting himself into self-destruct mode every time it seems like they might lose. Throughout the gunfight, he spends as much time talking IG-11 down from self-destructing as he does shooting the enemy.

Despite IG-11's self-defeating attitude, the two of them do manage to work as a team and take out all the guards. They march in to find their quarry... is a baby?

It turns out that yes, the "50-year-old" the Mandalorian was assigned to find is one of Yoda's species, who age super slowly. 50-years old, in this case, is still an infant.

Unfortunately, that's when the Mandalorian also discovers that IG-11's mission is different than his. The Mandalorian was ordered to bring in the child alive, IG's are to kill it.

There's no hesitation. IG-11's robot head is blasted into parts before he can finish his sentence.

But that can't be the end of IG-11, can it? Historically, comedy relief droid sidekicks are a staple of Star Wars. More importantly, the Mandalorian now has an infant he's trying to take care of and keep alive, while every bounty hunter in the galaxy is on his tail. He needs help. Fans can only hope that he takes both the droid and the baby with him when he leaves, and puts IG-11 back together again.