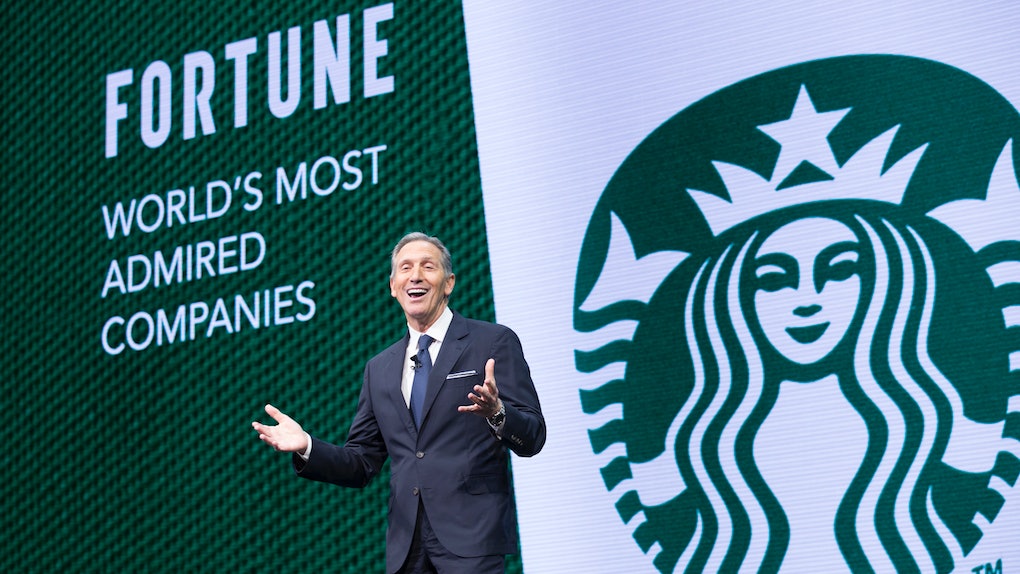 Over the past few weeks, it's felt like there's been a new presidential bid announcement every day. The approaching 2020 presidential election is clearly going to be a true battle royale, with a number of Democrats launching exploratory committees and hitting the road to begin campaigns. However, it looks like yet another name is entering the ring, but with a unique approach. So, who is Howard Schultz? He's best known for his work in charge of one of America's most beloved coffee chains, and he might soon be known for his political career.

On Sunday, Jan. 27, Politico reported that Howard Schultz, the former CEO of Starbucks, is "seriously considering" running for president as a centrist Independent in the 2020 election. Schultz announced his plans during an interview on 60 Minutes, where he told journalist Scott Pelley that he decided to run as an Independent (despite being a lifelong Democrat) not only to take on incumbent President Donald Trump, but step away from the extremely divisive two party system.

“We have a broken political system with both parties basically in business to preserve their own ideology without a recognition and responsibility to represent the interests of the American people,” Schultz told The New York Times.

Following Schultz's appearance on 60 Minutes, Trump took to Twitter to call out the former Starbucks chief's plans to run against him, and claimed Schultz "doesn't have the guts" to run for president. Additionally, Trump proceeded to throw some shade at the coffee company when he asked whether the chain was still paying rent in his Trump Tower hotels. Elite Daily reached out to the White House, Starbucks, and Schultz for comment on Trump's statement, but did not hear back in time for publication.

Despite the political divide, the president and Schultz, who called himself a "life-long Democrat," have a fair amount in common. Like Trump, Schultz prides himself on being a successful business man, but does not have any prior political experience leading up to his presidential run. Schultz was the CEO of Starbucks from 1986 to 2000, and later returned from 2008 to 2017. With his help, Starbucks ranked fifth on Fortune's Most Admired Companies for 2018.

While Trump was campaigning for president in 2016, he frequently touted his experience in business as a selling point, claiming that he would make America just as successful as his businesses (which were sometimes subject to bankruptcy filings or help from his wealthy dad). However, Schultz is arguably just as successful, rising from working-class roots to lead one of America's biggest companies. Moreover, during his two years in the White House, Trump's approval rating has fallen to only 39.4 percent, according to a Jan. 28 poll from FiveThirtyEight. This low number could be due to recent events, when Trump's demand for funding for his $5.7 billion border wall led to a partial government shutdown that lasted more than a month.

Trump isn't the only person who isn't thrilled about Schultz's announcement, though. Some Democrats also don't want the former CEO to run, citing fears that he might split the Democratic vote and end up helping Trump. Julian Castro, who officially announced his Democratic presidential bid on Jan. 12, urged Schultz not to run. Speaking to CNN on Sunday, Jan. 27, Castro said that Schultz running would increase the risk of Trump being re-elected.

"I have a concern that if he did run, that, essentially, it would provide Donald Trump with his best hope of getting re-elected," Castro said to CNN. Schultz, for his part, told the Times that he didn't intend to be a "spoiler." Elite Daily reached out to Schultz's team for comment about the criticisms, but did not hear back in time for publication.

So, yet another person has announced their run for presidency. At this point, who can keep up with the amount of candidates who may be taking on Trump next year? One thing is for sure, this is going to be one interesting election season.