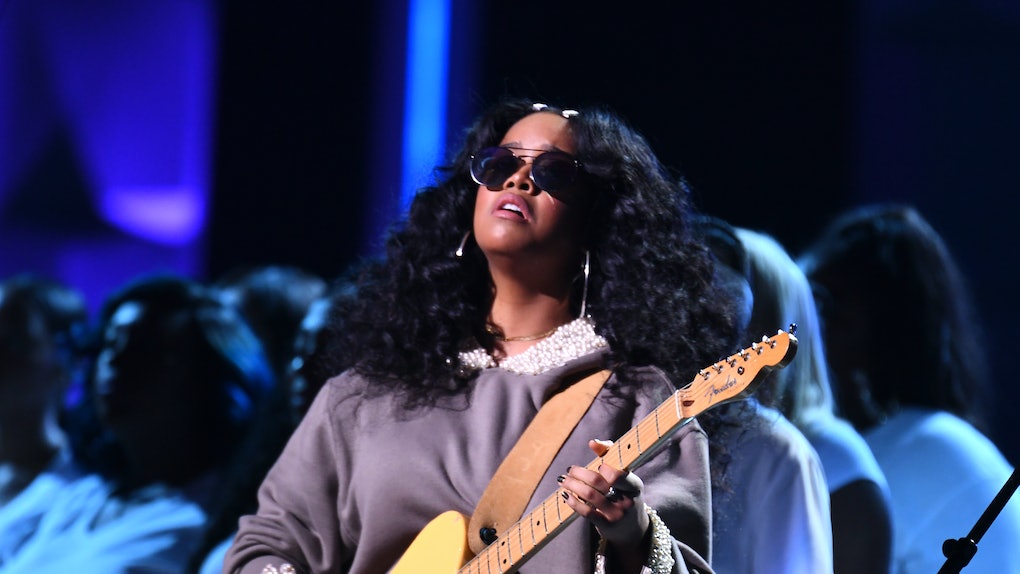 Who Is H.E.R.? The New Artist Is Nominated For 5 Grammys Because She's Amazing

Each year, the list of Grammy nominees always includes a few unfamiliar names, and Dec. 7's announcement of recognized artists was no exception. ICYMI, a 21-year-old R&B singer scooped up five Grammy nominations, and you need to listen to her work ASAP. Who is H.E.R.? The new artist is a superstar in the making.

Born Gabi Wilson, H.E.R.'s stage name is an acronym for "Having Revealed Everything." Like many artists before her, she often keeps her face covered and veers away from discussing her personal life. In the fall of 2016, the music industry took notice of her when her record label sent H.E.R.: Vol 1. to press with the request that the singer's identity remain secret. The album hit the top spot on iTunes' R&B chart, and since then, H.E.R. has particularly gained recognition for her song "Best Part." If you've managed to miss out on her work before today, consider that impressive range of Grammy nominations as a reason to check H.E.R. out before the awards air in February.

Named as a contender in the prestigious Best New Artist category, H.E.R. and her self-titled album also earned nominations in the categories for Album of the Year and the Best R&B Album. Her song "Focus" was recognized as a Best R&B Song nominee, while "Best Part" was also nominated for Best R&B Performance. That's more than enough street cred to hold your own on the Grammys red carpet, right?

H.E.R. took to Twitter to celebrate her nominations, expressing disbelief about how many she scored. The Grammys' official Twitter account even retweeted one of her posts and sent some love her way. Is it too soon to tell H.E.R. that at this rate, she might as well get friendly with the forces behind the Grammys?

Given her commitment to flying under the radar, H.E.R. has given a limited amount of interviews about the decision to hide her identity and put her music in the spotlight. Talking to Elle.com in September, she said:

I think it has allowed me to make the music the focus, and for people not to care about the superficial things or who I'm associated with, what clique I belong to—all those things that don't matter. It's really made people focus on the music, and that's what's special about it.

With her five nominations, H.E.R. has landed among the list of the 2019 Grammys' most recognized artists. Kendrick Lamar has the most nominations with eight nods, but for a relatively new artist, H.E.R. has definitely established herself as a force to reckon with. Although she may be young, the singer has come to understand her impact on listeners, particularly young women. She told Elle.com:

I've become a voice for young women who are growing up and uncomfortable being vulnerable, uncomfortable with changes, heartbreak—and becoming jaded. It's about acknowledging it and empowering yourself, and empowering other women, sharing those stories, and making people feel like they're not alone.