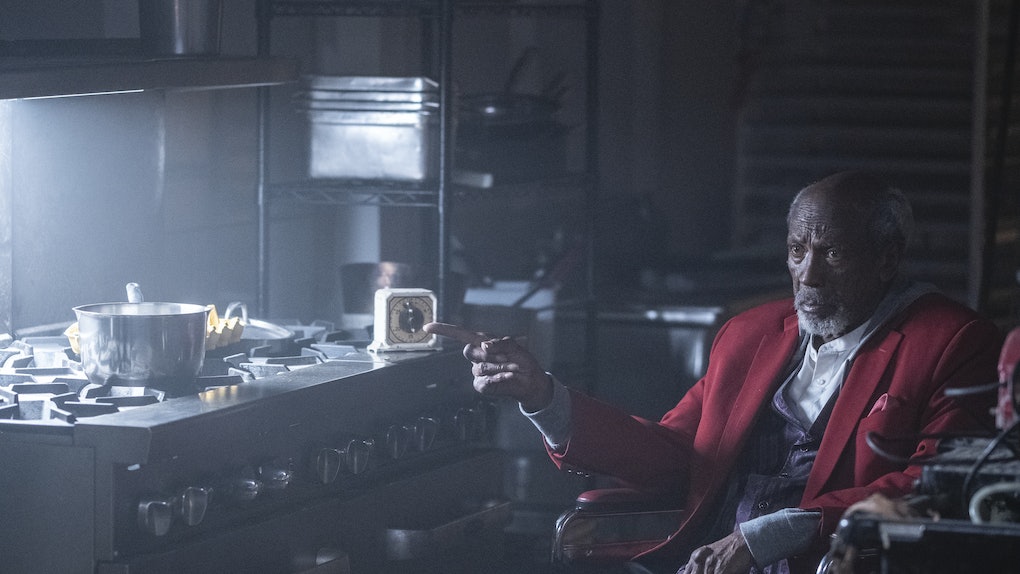 Who Is Dr. Manhattan? The 'Watchmen' Comic Superhero May Be Pulling Strings

HBO's Watchmen premiered to the largest audience the cable channel had seen since the debut of Westworld back in 2016. But those who tuned in found a seriously perplexing world. (As one tweet I saw put it, "I just want to understand what's going on for four consecutive minutes!") There's a lot of comic book backstory that pops up unexplained on the show, and that stayed true in the second episode, "Martial Feats of Comanche Horsemanship." This week brought up one of the comic's most famous characters, Dr. Manhattan. But who is Dr. Manhattan? And, perhaps more important, where is he? Warning: Spoilers for Watchmen follow.

This week, fans met the man who claims to have killed Angela's boss, Judd Crawford. But Crawford was strung up to a tree. This gentleman, William Reeves, is 105 years old and in a wheelchair. Angela cannot believe he did it. But he insists he is guilty. He did it with his mind, he tells her. "Maybe," he says, "I'm Doctor Manhattan."

Angela shrugs this off. She informs him that Doctor Manhattan is on Mars, and can't make himself look like a normal human. But Reeves continues to insist he is at least in league with Manhattan. So when the episode ends, with what seems like an alien spaceship beaming up Reeves inside Angela's SUV, viewers were stunned. Could Reeves be telling the truth?

So who exactly is Doctor Manhattan? Over in the mysterious castle run by Jeremy Irons' still-as-yet nameless character, viewers learn he's rather obsessed with the guy.

Manhattan's real name was Jonathan Osterman, and he wanted to be a watchmaker. But his father insisted he study nuclear physics instead. One night, as Osterman worked at the research base at Gila Flats, a terrible accident occurred in the intrinsic fields test generator. Jon, having gone back in to get his lover Janey's watch, gets locked in. The generator fires up, and he's ripped to pieces.

In the comic, it takes months before his body reassembles as a seven-foot-tall hairless giant who glows blue. With his mind divorced from linear time, he eschews human habits like clothes. He is famously always nude, a detail that Irons' cloned army of actors makes sure to get right.

Manhattan is the only superpowered person in Watchmen. Everyone else, from the Minutemen to Angela's Sister Night, are masked vigilantes using their own fighting skills or technological know-how to save the world. He ended the Vietnam war, winning it for America. But worries about the radiation Manhattan might generate meant that he was accused of being a cancerous agent. This is why he decided to take himself to Mars, where Angela insists he still lives.

But the fact is, Manhattan still has unfinished business here. When the Alien Squid dropped on New York in 1985, he was one of a handful of people who knew the truth, that it was a hoax, perpetrated by the now-supposedly-deceased Adrian Veidt. Though he probably still spends most of his time on Mars, chances are he's keeping an eye down on Earth. He might even have help. Could that come in the form of a 105-year-old man, who somehow killed Angela's boss? It certainly wouldn't be the weirdest twist the story has done so far.