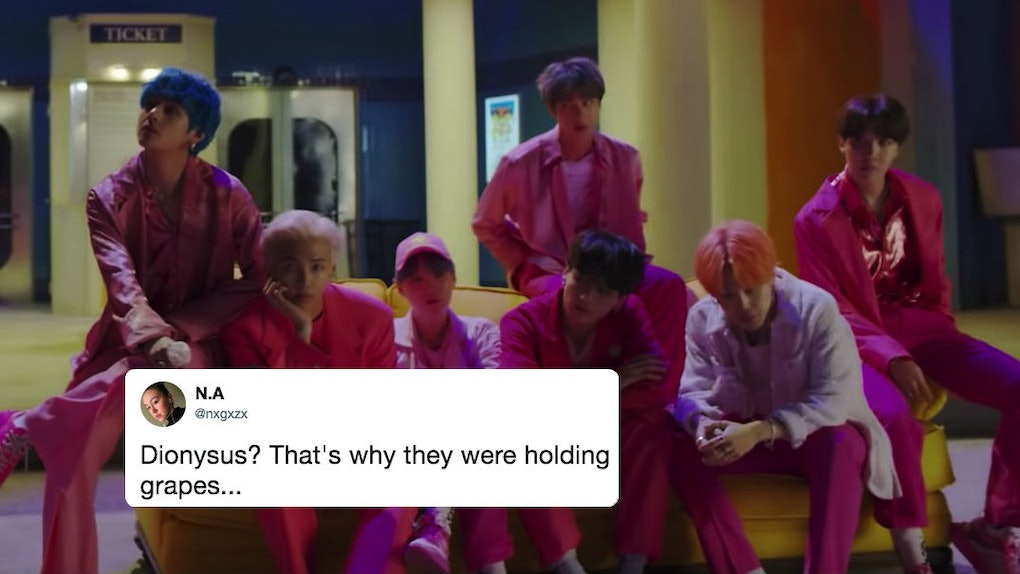 Who Is Dionysus? BTS' New 'Map Of The Soul' Track Gets Inspiration From Greek Mythology

BTS' much-anticipated new album, Map of the Soul: Persona, is dropping on April 12, you guys, which is just FOUR DAYS from now. FOUR SHORT DAYS! Please, please let them pass quickly! In the meantime, ARMYs have now gotten a peek at the Map of the Soul: Persona tracklist, and man, this baby looks goooood. BigHit Entertainment revealed on Twitter that the album will be a seven-track EP that will include the already-released RM solo "Intro: Persona," as well as the single "Boy With Luv" featuring Halsey. The other songs on MotS: Persona are: "Mikrokosmos," "Make It Right," "HOME," "Jamais Vu," and "Dionysus." So, who is Dionysus? Because the name is giving me some serious Greek god vibes.

Well, it turns out that Dionysus is, well... an actual Greek god. In Greek mythology, Dionysus is the son of Zeus and the Theban princess Semele. He was the only one of the twelve major deities (called the Olympians) who had a mortal parent. He's associated with wine, grape cultivation, fertility, ritual madness, theater, and religious ecstasy.

According to the website Greek Gods & Goddesses, Dionysus was is an important and popular figure in Greek mythology, if a bit of an outsider. The site's description reads, in part:

He was one of the twelve Olympians, although he was the last to arrive, and his unusual birth and upbringing marked him as an outsider. This was an inherent part of his cult, which often focused on the more subversive elements of his nature. Dionysus was often called Eleutherios, meaning 'the liberator,' because his wine, music, and ecstatic dance freed his followers from self-consciousness and the restraints of society. Earlier images and descriptions of Dionysus depict him as a mature male, bearded and robed holding a fennel staff tipped with a pine-cone. However, in later images the god is shown to be a beardless, sensuous, naked or semi-naked androgynous youth.

Pretty interesting stuff there. Not surprisingly, the word "Dionysis" is now trending on Twitter, as BTS fans read up on the Greek god and scramble to figure out what on earth the song could be about.

As is the norm for ARMYs, there are a lot of theories floating around on Twitter about "Dionysus" right now. A LOT. And some of them are getting pretty damn deep.

Many fans on Twitter seem to think that because Dionysus was known to be the god of transgender people, and because BTS is working with Halsey, an openly bisexual artist, the song will be an LGBTQ-friendly anthem.

Other fans think BTS may have actually already dropped hints in promotional photos that Dionysus would be one of the album's track names, since a bunch of the members of the K-pop group were seen holding grapes in the images.

Meanwhile, some other fans are just ready for the song "Dionysus" to finally drop so they can chill out while they listen and get their wine-drunk on.