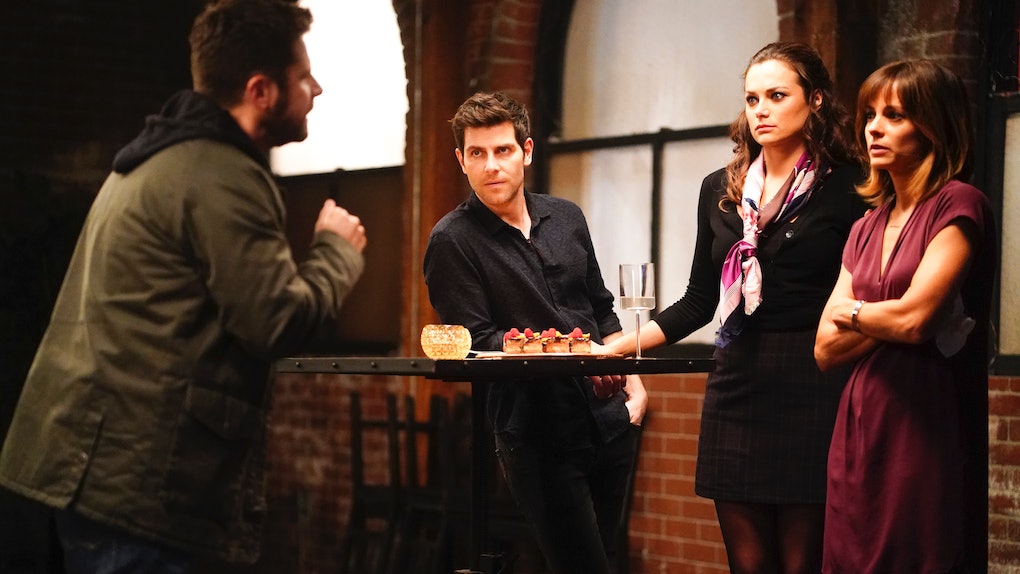 Who Is Constance Zimmer's 'Million Little Things' Character? Fans Have A Ton Of Questions

This post contains spoilers for A Million Little Things. Despite delivering a generally heartwarming Christmas story in its mid-season finale, A Millon Little Things shattered its festive mood when it seemingly confirmed one of fans' biggest theories. A flashback showed that Ashley and Jon did have some kind of romantic connection, and in the present day, Ashley alluded to knowing the dirty secret behind the Dixons' home ownership. What with Barbara Morgan's identity still unknown and Jon's business deals looking increasingly shady, who is Constance Zimmer's A Million Little Things character? She briefly appeared at Jon's funeral and could soon answer questions about his debt and why he killed himself

In case your memory of the pilot episode is shaky, the UnREAL star was seen when Eddie (David Giuntoli) returned to his seat in the church after giving Jon's eulogy. Sitting behind him, Zimmer's character leaned toward him and whispered, "That was beautiful." As Eddie thanked her, the woman stayed close, as if she meant to say more. But the camera then cut away from her in favor of Sophie's performance of "Both Sides Now," and viewers didn't see her paying her condolences at the reception.

Although Zimmer definitely resembles Stéphanie Szostak as Delilah, we can likely rule out the chances of them being sisters or close relatives. Wouldn't we already have figured out the character's identity if that was the case? As neither Delilah nor Ashley (Christina Ochoa) know the Barbara Morgan listed as one of Jon's insurance beneficiaries and the mystery woman hasn't interacted with anyone since the funeral, viewers are still convinced that Zimmer might be Barbara. Based on teaser footage from the season's second half, this looks like the probable outcome.

Although the series is now on its holiday break, the promo for its winter premiere confirmed Zimmer's return. In the intense teaser for Jan. 17's episode, her character brushes past Ashley, telling her that they don't need to talk. She's later seen saying, "Are you Delilah Dixon?" to Delilah, who she clearly already knows if she was at Jon's funeral. So, who is this woman and why is she only coming into the group's lives now?

Zimmer's appearance in the video threw some fans for a loop — after all, her funeral cameo was easily missed. Given the promo's inclusion of an envelope with Barbara Morgan's name on it, it's hard to believe that the show isn't hinting that Zimmer is Barbara. Even without this new promo footage, the theory has thrived throughout the season, as evident by fans' tweets.

The expression we use with ABC is: You want a bagel, not bread crumbs. So there’s stuff coming. The mystery of who [Barbara Morgan] is and her relationship to Jon and this group plays out for the remainder of the season and will carry us into the second season. You will find out by the end of the first season who she is and what role she plays in Jon’s life. There’s a lot of speculation that Barbara Morgan is Constance Zimmer, too... Why would you put someone just in one scene in the pilot and not have her come back?

It's unclear whether she's friend or foe, but Zimmer's character is definitely meant to complicate the aftermath of Jon's death even more. We'll have to wait and see if she can provide any clarity to the Barbara Morgan mystery.