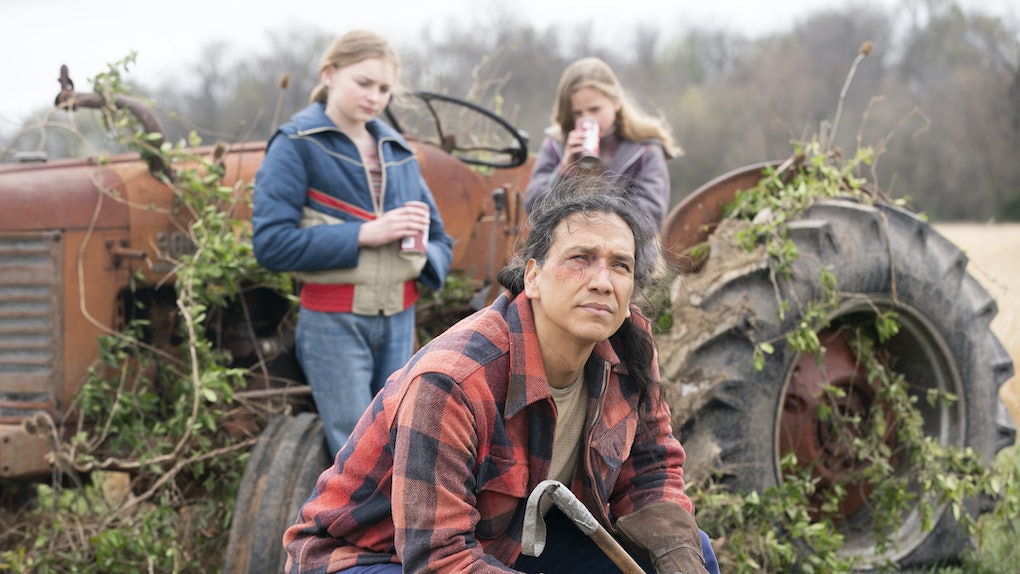 Who Is Brett "Trashman" Woodard On 'True Detective'? Here's Everything Viewers Should Know

This week's episode of True Detective finally reached out and grabbed the third rail running through Season 3: Race. From the get-go, Mahershala Ali's character, Wayne Hays, has faced racism but only addressed it around the edges. There's a passive aggressive remark here his white partner Roland West (Stephen Dorff) doesn't get, a snide comment there about who gets promoted and who doesn't. But this week, the racial tensions inherent in the situation took front and center, and not just for Hays. Who is Brett "Trashman" Woodard on True Detective? The only Native American resident of the town found himself the target of a lynch mob. Warning: Spoilers for True Detective Season 3 follow.

Woodard (Michael Greyeyes), or as the white residents of the town call him, "Trashman," is a Vietnam vet who has struggled to reintegrate himself into civilian life. His inability to hold a job and his emotional issues caused his wife to leave and take their kid long before the Purcell case happened. Woodard took to working as what I grew up knowing as a "junk peddler," someone who picks up the things people put out on the curb to break them down and sell for scraps.

But when the Purcell kids go missing, and Woodard admits to being one of the last to see them riding their bikes to their doom, the white side of the town turns their animus on the "Trashman."

This is not the first time Woodard found himself being chased by the residents of the town. Last week's episode also found him facing down a mob, but with the good fortune to escape. But twice is apparently too much. As viewers can see in the above scene (one of the most intense of the episode), Woodard digs deep into his training as a soldier and races to get himself home ahead of the mob. As a combat veteran with more than a few souvenirs hidden away from his time in the war, he's already prepped his house as a boobytrap to anyone who tries to enter it. It's just a matter of setting out the explosives.

Woodward has a little bit of extra time too, as Hays and West come rolling up with a posse of cops to try and put an end to the mob before anyone gets hurt. But they're too late. “Front Toward Enemy” reads the landmine rigged to the front door. These are words the foolish leader of the mob will likely never see as he kicks it in.

In Episode 3, Hays and West referenced an unfortunate shootout incident that happened during their investigation back in 1980. My guess is when viewers pick back up next week, the situation at Woodard's place will deteriorate into this incident. From what anyone can tell, Woodard most likely survived the explosion, but is now fully tripped out back into a Vietnam-like situation and will attempt to defend himself.

As much as West and Hays sympathize with him — they're both Vietnam vets themselves — chances are they'll have no choice but to take him down. The only question is if Woodard survives the encounter, or if the detectives wind up with a multi-death tragedy on their hands.

More like this
Who Is Cleo On 'Outer Banks'? Carlacia Grant Is New To Season 2
By Ani Bundel
7 'Game Of Thrones' Spinoff Ideas HBO Should Def Consider
By Ani Bundel
Shonda Rhimes' Quote About Regé-Jean Page Leaving 'Bridgerton' Is SO Shonda
By Rachel Varina
Stay up to date