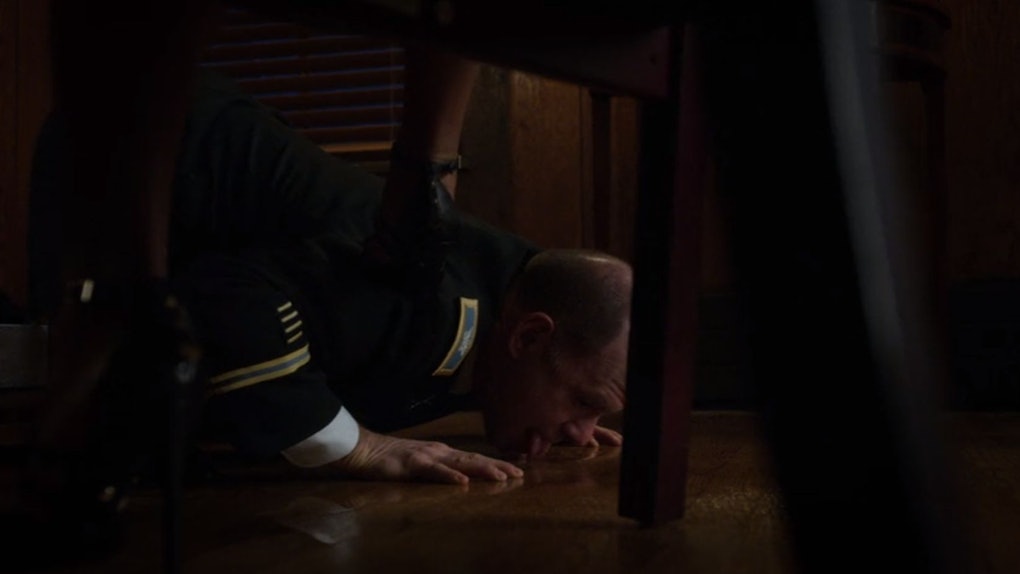 Who Is Bennett On 'The Punisher'? The New Character Has Fans Asking Questions

It's not every day that a new character arrives on a Marvel series and completely freaks you out. But then again The Punisher isn't like most Marvel series. It's got some of the most graphic sex scenes to date, for one. It accidentally dips into Fast and the Furious territory, when not going full Call of Duty style video game for shoot outs. But the newest character's introduction in episode 7 is something else. Who is Bennett on The Punisher? And did he seriously just.... lick the floor? Warning: This post contains spoilers from The Punisher Season 1.

If the name Col. Morty Bennett seems like one that sort of came out of left field halfway through The Punisher, that's because it did. Our first reference to him didn't even have a name. He was just "the guy in the mortuary." It wasn't until Frank Castle was talking to Billy Russo at the end of episode 6 that we got a name to put to that person, the third one in the room along with Schoovoner and Agent Orange who Gunner witnessed stuffing his dead comrade's body full of heroin to ship back to the states.

With few leads and less direction for Frank to go once Gunner's been taken out of the picture, Frank has Micro track Bennett down. Turns out the man is a creature of habit. His Saturday nights are spent dining at home... where he apparently gets off on tasting things that aren't exactly food.

Bennett is so creepy and wormy from the moment he comes on screen, one can immediately understand why Micro worried Castle might forget himself and kill the guy once they were in a room together. He's exactly the sort of power mad, yet twisted up sort of guy that would disgust Frank simply by breathing the same air. If Castle saw him licking the floor while being stood on by a woman at dinner? Castle might just fire to put the poor sap out of what he would see as "bizarre emotional misery."

As it is, Frank is *slightly* taken aback when he walks in and finds his quarry already prepped for torture, with a ball gag in his mouth and everything. But what it turns out is that it's the sex worker that Castle (and perhaps Bennett) should be most worried about. Her immediate announcement of "He's here" is a dead giveaway that Castle isn't the only one stalking Bennett. Russo and Agent Orange have also staked out the property, awaiting Castle's arrival.

Bennett actually doesn't seem to be in on it at first, considering his shocked face when Castle reveals himself. But then again, maybe not, since he clearly knows *why* Castle is there for him. "They made me do those things!" he shouts hysterically. "They," obviously being Schoovoner and Orange, that is. But Russo's appearance after Castle's escape is also a shcok to Bennett. So it seems like he's he perhaps always though someone from the unit would find out about the heroin and come for him, but not the fact that "They" would be right on that guy's tail.

Still Bennett putting the ball gag obediently back in his mouth when Castle says not to make a sound might be one of the few funny moments in a series that's mostly devoid of them. And Castle did as ordered. He didn't touch Bennett, and left the man alive. (Billy might insist it was his doing that saved Bennett's life, but since the real purpose of the mission was to clone Bennett's phone to track it, I'm guessing that's a bit of an exaggeration.)

As it is, Bennett is just a little too smart for his own good. If he really were as dumb a mark as he told Castle, he probably wouldn't have put two and two together over Russo being on base without his knowledge. He wouldn't have insulted Russo either.

And that was the end of the short stint of Bennett on The Punisher.