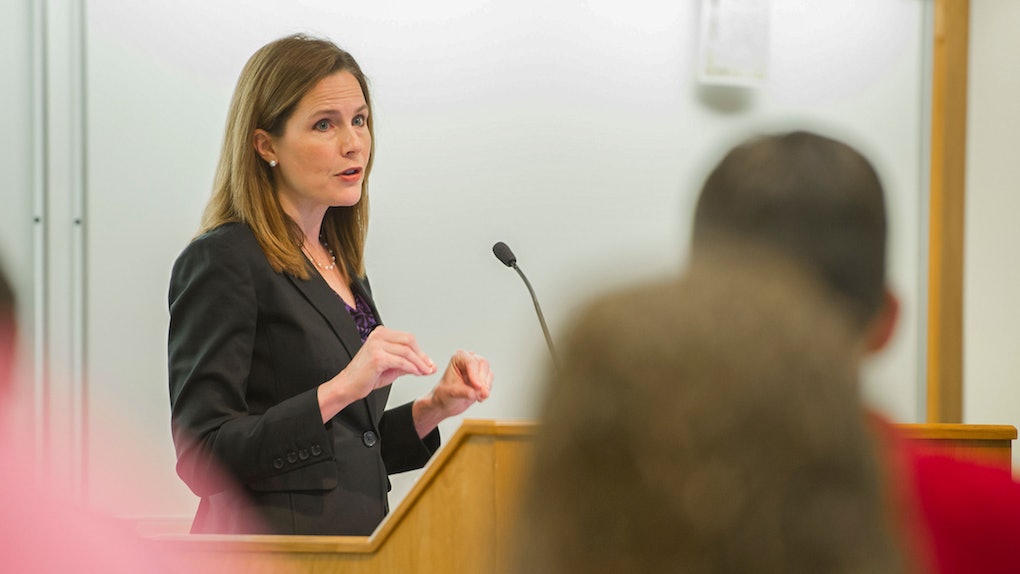 It's only been a week since Supreme Court justice and feminist icon Ruth Bader Ginsburg died on Sept. 18, but President Donald Trump isn't wasting any time nominating a replacement. Just a few days after Ginsburg's death, Trump said that he would name his nominee by Saturday, Sept. 26 — but ahead of the nomination, multiple sources reported his most likely pick. So, who is potential Supreme Court nominee Amy Coney Barrett? Here's what you'll need to know.

On Friday, Sept. 25, CNN and The New York Times both reported that Barrett, who Trump appointed to the Chicago-based 7th U.S. Circuit Court of Appeals in 2017, is Trump's likely selection. According to the Times, she was, in fact, the only candidate interviewed. The conservative judge is regarded by supporters as a champion of anti-choice activism and stringent right-wing policies. And, at a relatively young 48 years old, she would likely have decades in which to help shape a conservative court, as the position of Supreme Court justice is a lifetime appointment.

A devout Catholic, Barrett’s position on issues such as immigration, gun rights, and abortion closely mirror those of Trump’s conservative base. In a 1998 article she authored for the Marquette Law Review, Barrett suggested that lawmakers can make decisions in accordance with their religion, writing, “Legislators are bound by [the Constitution],” however, they can “break their oaths and violate it by passing laws against abortion and other constitutionally protected acts that they view as sinful.”

Although Barrett has not been in a position to explicitly rule on abortion, she has opined in favor of cases restricting abortion rights as a member of the 7th U.S. Circuit Court of Appeals. In 2016, Barrett voted to rehear an Indiana law that would have required fetal remains to be buried or cremated following an abortion — giving the law another chance to be implemented. Abortion rights advocates said the law would place undue burden on women and health care providers. Additionally, in the case of an Indiana law that would require minors to gain parental consent to have an abortion, Barrett joined the dissent, which stated the law should have been allowed to take effect. “Preventing a state statute from taking effect is a judicial act of extraordinary gravity in our federal structure,” the dissent read.

Pro-choice activists are concerned that, should Barrett be confirmed as the next Supreme Court justice, Trump may have a better chance than ever to deliver on his 2016 promise to overturn abortion rights case Roe v. Wade, especially in light of some of her previous statements on precedent. In a 2013 law review for Notre Dame Law School (NDLS), Barrett wrote that because “a justice’s duty is to the Constitution,” it is “more legitimate for her to enforce her best understanding of [it] rather than a precedent she thinks is clearly in conflict with it," per NPR.

On other issues, her record shows a conservative bent. In August 2019, Barrett backed Trump’s severe immigration policies when she dissented in a three-judge panel vote to halt the “public charge” ruling in Illinois — a ruling that would deny legal permanent residency to certain immigrants, such as refugees and low-income workers, who may need government assistance. And in a 2019 decision as part of the 7th Circuit, she opined that a Wisconsin law prohibiting felons from owning guns was unconstitutional. "[L]egislatures have the power to prohibit dangerous people from possessing guns. But that power extends only to people who are dangerous," she wrote in a dissent in the case.

Barrett has also cited her religious faith in her legal work, which has raised concerns about the constitutionally required separation of church and state, should she be appointed to the bench. “Keep in mind that your legal career is but a means to an end,” she stated In her 2006 diploma ceremony address at NDLS. “That end is building the kingdom of God.”

However, Barrett has said that her religious affiliation would not affect her judicial work. During her appellate court confirmation hearing in 2017, she told Sen. Dianne Feinstein that "[her] personal church affiliation or [her] religious belief would not bear on the discharge of [her] duties as a judge," per NPR.

Trump is expected to formally announce his nominee on Saturday, Sept. 26. From there, it will go to the Senate for confirmation.