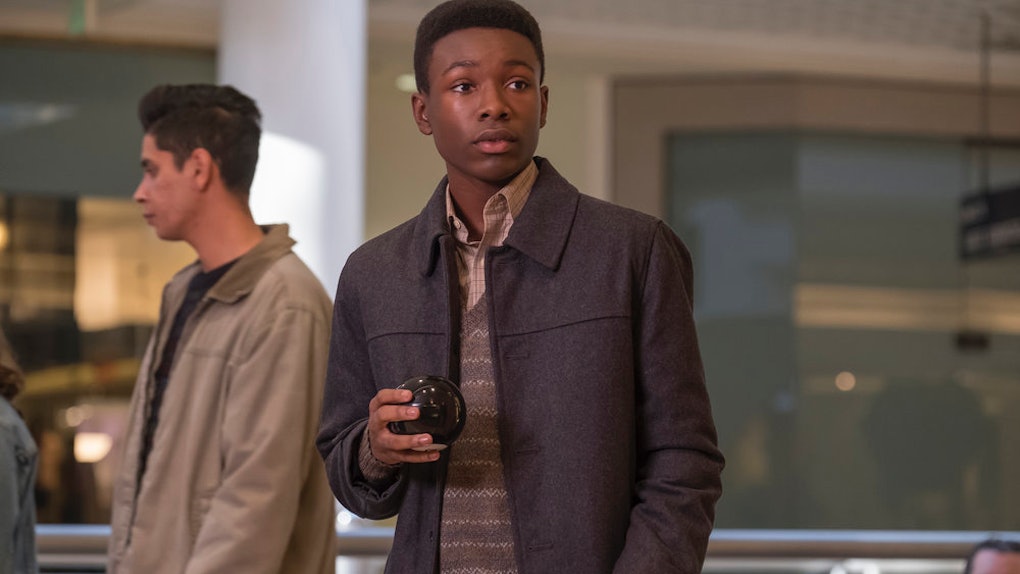 Who Is Allison On 'This Is Us'? The Red-Headed Girl Finally Has A Name & A Story

Last week's This Is Us trailer showed a key part of tonight's episode: Randall flipping through the pages of an old composition book. Before tonight's episode aired, and we learned the book was actually William's, I assumed the it was Randall's from his teenage years. Why would I assume we were going to revisit the love poems of Randall's teenage years? Because there was one puzzle piece still missing from the night of Jack's death: the red head girl Randall was holding hands with. This week, we finally met her and learned her name. So, who is Allison on This Is Us? And why is she so important?

While I was wrong about the poems, but I was correct that we would meet Randall chasing down his first girlfriend. It's important to note that's it's not a lovesick Randall we meet, but a purpose driven one. We know that Randall is lovesick, he's helpless. We learned Kevin had to coach Randall the night he first asked Beth out because he was so lost. But Randall is definitely not helpless here and confidently asked Allison out on a date.

But let's quickly rewind: When we saw the night Jack died, fans were startled to see that Randall had a high school girlfriend. We had no previous information about her or indication that she even existed. Who was she?

Tonight we got our first answer to that, starting with Randall insisting on tagging along to the mall where Kate and Kevin went shopping for Winter Formal. It turns out that Randall has his own target at the mall: this girl, who works behind the counter at a women's accessory store. Not like the type of accessory store for teenage girls, like a Claire's, or a Delia's. We're talking the more refined, high end place that sells lots of jewelry and scarves.

It seems like the kind of place that didn't usually hire high school girls to work behind the counter, unless she was someone on the mature end of things.

Are we really surprised someone who would be considered more mature than her peers that would catch Randall's attention? Randall seemingly has always been a guy who desired strong, independent women. (See: Beth.) This one fits the bill exactly.

How did Randall get her to say yes to a date? It turns out the answer is in a very Randall way. There was no Kevin helping along on a muted line. Kevin wasn't even aware of what his brother was up to. Randall rigged up a completely custom made "Magic Eight Ball" to tell Allison her future, and that her future was to go out with him.

Or at least, not overthink her answer to the question of "Will you go out with me?" We don't know much about Allison yet, but apparently Randall's decided she's enough like him that the way to her heart is to stop her freaking out over the question of a date with a "Hey! Don't overthink it!"

I'm guessing it worked, too.

We now have all the pieces in place for the night of the fire.

It can't be long now, before the night in question arrives, can it?

More like this
Who Did Emily Poison? 'The Handmaid's Tale' Season 2 Is Off To An Intense Start
By Ani Bundel
In 'Riverdale' Season 5, Toni Topaz Is The Black Superwoman Without A Cape
By Erika Hardison
Is Meredith Actually Recovering On 'Grey's Anatomy'? She Finally Woke Up
By Abby Monteil
Stay up to date