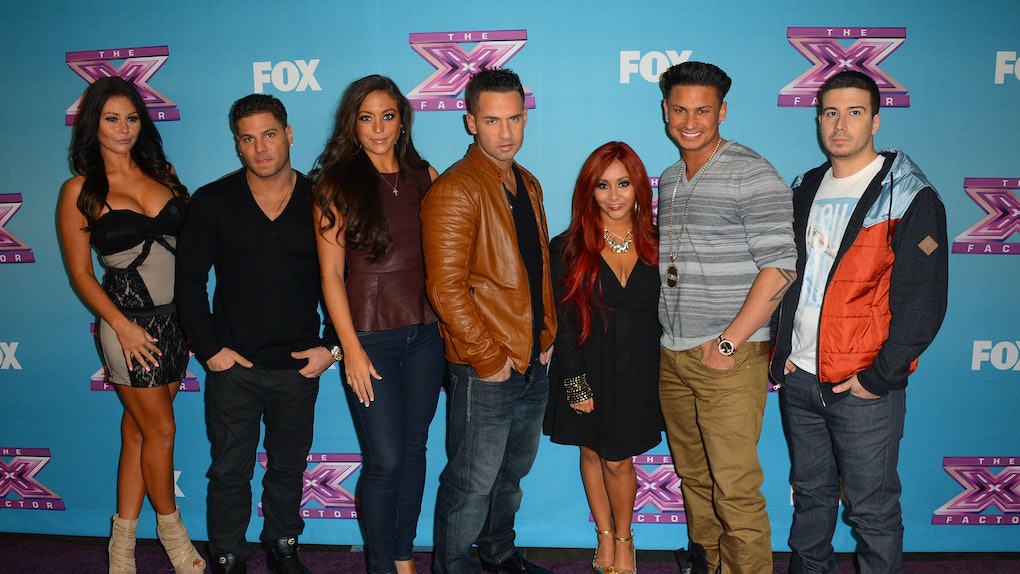 Who Gets Engaged On 'Jersey Shore Family Vacation'? The New Trailer Teases A Big Moment

The official Jersey Shore Family Vacation trailer is finally here, and the special reunion series is arriving way sooner than we thought. Set to premiere on Thursday, April 5, Jersey Shore Family Vacation brings back the majority of our favorite guidos from the original series for a Miami vacation. Thanks to the new trailer, we have some insight into what these crazies get up to even in their old age. (OK, they're in their 30s, but that's lightyears away from being 22 on the Shore). Most surprisingly, the trailer dropped hints of the cast shopping for engagement rings, so with two cast members already married, who gets engaged on Jersey Shore Family Vacation?

As detailed on their joint spinoff show Snooki & Jwoww, both Nicole "Snooki" Polizzi and Jenni "Jwoww" Farley are now married with two children each. Compared to the rest of the cast, they may come off as the settled old ladies, but the duo's antics in the trailer clearly prove that they're still up for going hard at the club every now and then. I'm particularly thrilled that it looks like the two still have plenty of relatable BFF moments in sweatpants while chilling at the house.

The trailer's lingering shot on a man holding a pair of rings has stirred some speculation about a potential proposal on the show, or at least some producer-influenced consideration of popping the question. So, with all of the men of the cast unmarried, who's the likeliest one to shop for rings?

While there have been unconfirmed reports that Mike Sorrentino, aka the Situation, is engaged to his longtime girlfriend Lauren Pesce, the rumors usually just emphasize that the two are ready for marriage and lifelong commitment. After meeting in college, Mike and Lauren dated for nearly four years, but were on a break from each other by the time Mike began filming Jersey Shore in 2009. They got back together after the MTV show wrapped.

The pair appeared together on the third edition of Marriage Boot Camp: Reality Stars in 2015, where they discussed Mike's struggles with addiction.

Speaking to PEOPLE in 2017, Mike spilled that he was ready for the next stage of their relationship:

I’ve definitely attained a lot of the goals that I’ve set out for myself. Now one of the most important ones is having a family and kids.

Known as one of the more outrageous people on the show back in the day, Mike would likely be the most susceptible to discussing an on-camera proposal. It's easy to joke about him, but it's obvious that his relationship has gone through the ringer and is meant to last.

Currently expecting a daughter with girlfriend Jen Harley, Ronnie probably has the most motivation to propose. Fans caught a glimpse of Jen with Ronnie in the trailer when he mentioned his impending fatherhood, and as much as Ronnie proposing to a different woman would give longtime fans mixed feelings, the moment would still be quite sweet.

While Paul DelVecchio, aka DJ Pauly D, doesn't seem to be in a relationship, Vinny Guadagnino (definitely the cast member who has become the most impressive) does have a girlfriend. However, he is far more private about the relationship, rarely posting pictures with her online, so we can easily rule him out as the one to buy a ring on the show.

At this point, we may see Mike or Ronnie hitting up the jewelry store, but we also have to consider that no news of a Jersey Shore engagement has hit the press. Is MTV trying to pull a Bachelor move on us and reveal a surprise engagement post-season?

We'll have to wait and see if the ring shopping is more than a tease. Jersey Shore Family Vacation airs on Thursday, April 5, at 8 p.m. on MTV.