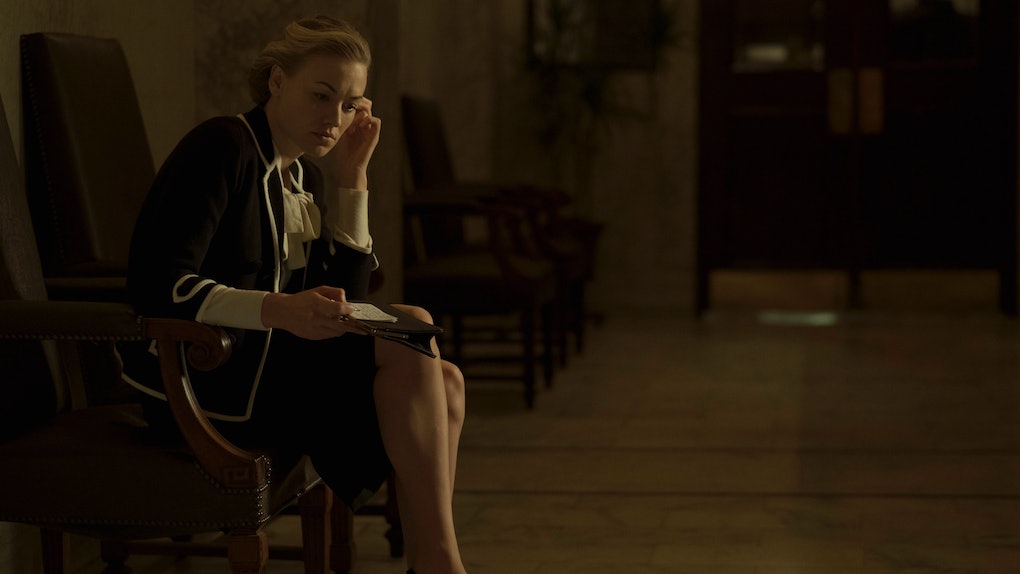 Who Are The Sons Of Jacob In 'The Handmaid's Tale'? Here's A Quick Gilead History Lesson

One of the most unsettling ideas of The Handmaid's Tale when it came out last year was that the "not-too-distant-future" it presented was actually far closer to happening than audiences were comfortable with. Thankfully, there's one thing we don't have in the U.S. in the real world: the Sons of Jacob. Who are the Sons Of Jacob in The Handmaid's Tale? And how are they tied into the creation of Gilead from the ashes of the United States?

While a lot of The Handmaid's Tale details are pulled directly from the novels they're based on — even some of the stuff that doesn't happen directly on the page — the Sons of Jacob are one of the few changes the series made in their adaptation. In the novels, the Sons of Jacob is a think tank. It is a political policy institute who is lobbying for a more extreme Christian bend to the government, partially driven by the ongoing fertility crisis in the country.

In the Hulu TV show, this think tank is turned more into a shadowy cabal or terrorist organization, not unlike the 1980s-era Army of God Christian militants. Instead of turning their violence on abortion clinics, they take a page from our more recent terrorist attacks and head off the FBI that's trying to take them down, pulling off three strikes on the U.S. government, taking out most of Congress, the White House, and the Supreme Court.

While on the page the Sons of Jacob are mostly mentioned offhand, in the show, we get a front row seat to their strikes, as both Commander Waterford and his wife, Serena Joy, were hardcore members of the movement. Serena Joy even wrote a manifesto called A Woman's Place.

Do not mistake a woman's meekness for weakness.

They believe they are changing the world for the better. Waterford is actually a direct conspirator though Fred himself is shown hedging when the order is given to proceed with the attacks, and Serena is the true believer who believes this will bring about a better society for all. (The bitter irony comes when she is shut out of the political planning once the new society is in place because she is female, and her books are tossed in the trash.)

Exactly what happened in Washington, D.C. is not detailed in the first series, though we have references to "when D.C. fell." What the show does confirm is that the Sons of Jacob worked to make the attack look like a terrorist event, playing to the already charged fears of the last couple of decades. They did this in order to push what is left of the government into declaring martial law, making their own leaders stepping into the void all that much easier.

Another thing that has not been made clear is how the government moved northward to the New England area. (In the books, Gilead only rules a country about the size of the New England area. In the TV show, viewers are left to assume Gilead rules the whole country.) One assumes in the post-crisis months there was a push to create the new government somewhere other than Washington, but there's just a lot we don't know yet. The Mexican ambassador scene sadly didn't do much to define Gilead's territory, though we do learn there's a "U.S. Government-in-Exile," which perhaps will be expanded upon.

Hopefully, we'll learn more about Gilead and the Sons of Jacob in the coming season. The Handmaid's Tale Season 2 arrives on Hulu on April 25, 2018 with two episodes, and one episode per week thereafter.

More like this
'Ted Lasso' Season 2: Apple TV+ Release Date, Trailer, Cast, & More
By Ani Bundel
8 Facts About Lisa Delcampo On 'The Circle,' AKA Lance Bass' Assistant
By Rachel Varina
Is Commander Joseph Lawrence Good Or Evil? 'The Handmaid's Tale' Fans Have Questions
By Ani Bundel
Stay up to date