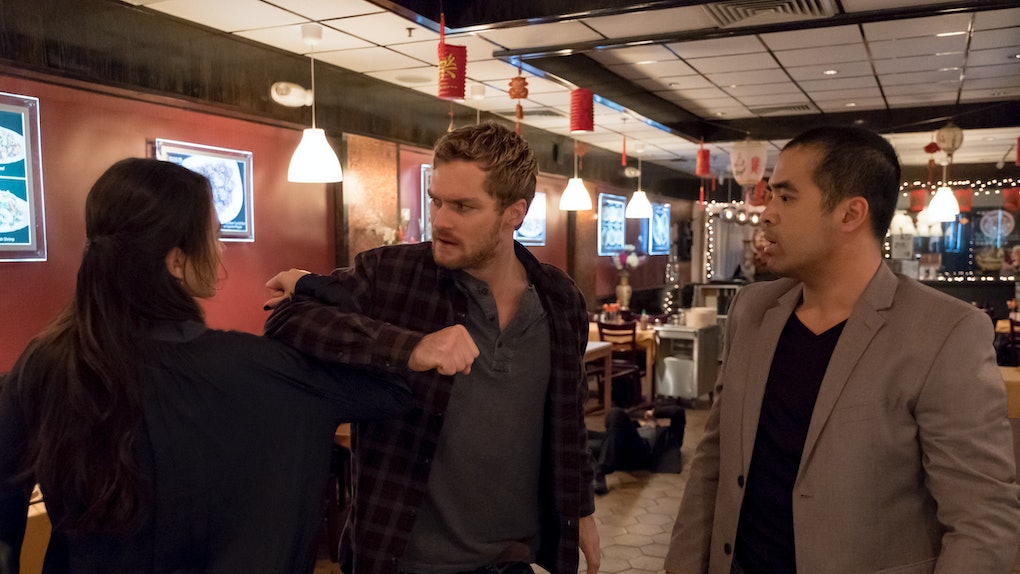 Who Are The Golden Tigers & The Hatchets In 'Iron Fist'? They're Part Of The Triad War

When Danny Rand was last on screen at the end of The Defenders, he had taken Matt Murdock's charge to "defend my city" to heart. When the new series opens, Rand is using his Iron Fist powers to keep Chinatown crime free, or at least as crime free as he can. But it's a fragile peace. Taking out the Hand had the unintended side effect of creating a power vacuum in New York City, and gangs are racing to fill it. Who are The Golden Tigers and The Hatchets in Iron Fist? If Danny isn't careful, they'll be the next war on the streets of the city. Warning: Spoilers for Iron Fist Season 2 follow.

The Golden Tigers are a regular villainous gang in the Iron Fist comics, lead by villain Chaka Khan. They're also martial arts experts, which makes them perfect foes for Danny to take out early on in the series to show off Finn Jones' newly acquired training.

The Hatchets, on the other hand, are left over from Iron Fist Season 1. When Danny needed to face down the Hand towards the end of the season, he turned to Mr. Yang, who runs not only the Hatchets but also the docks in New York City. The Hatchets, therefore, could be interested in listening to Danny when it comes to starting a war with their rivals. It also helps Mr. Yang's wife, Sherri, also is on the board of the place where Colleen volunteers.

The two major factions make up part of the "Triad," which are competing criminal syndicates. The word "Triad" suggests there would be a third rival in the faction since the term means "three," but it's actually pulled from the real-life nickname of Chinese transnational organized crime syndicates. These organized criminal enterprises take their name from ancient China, where "The Triad" referred to one of three major secret societies in the country.

When Iron Fist starts, there's pot stirring going on behind the scenes between the two gangs, which Rand doesn't know about. Davos, who has come with Joy to New York City to ruin Danny's life. This means egging on the Tigers to fight for control of the docks in New York. It also means attacking Mr. Yang so he cannot offer a parlay with his rivals when Danny asks for peace.

There's also a smaller, and a much younger gang of street rats who are trying to make a go of muscling their way up the chain. Mostly made up of homeless and hungry kids, they work to pull one on Colleen before she shuts them down. Some of them are good kids. Heck, most of them probably would be in better circumstances. But they've fallen through the cracks, and instead of pledging allegiance to entrenched power, they're trying to make their own way.

Can Danny keep these gangs from each other's throats? In most situations, the answer would be yes, but with Davos having stolen the Iron Fist for himself and causing havoc, Rand's abilities to keep the peace are severely limited.

More like this
What Are The Eldritch Terrors In 'Chilling Adventures Of Sabrina'? They're No Joke
By Dylan Kickham
10 Quotes From Netflix's 'Enola Holmes' That Are So Freaking Relevant
By Rachel Varina
Who Did Emily Poison? 'The Handmaid's Tale' Season 2 Is Off To An Intense Start
By Ani Bundel
Stay up to date