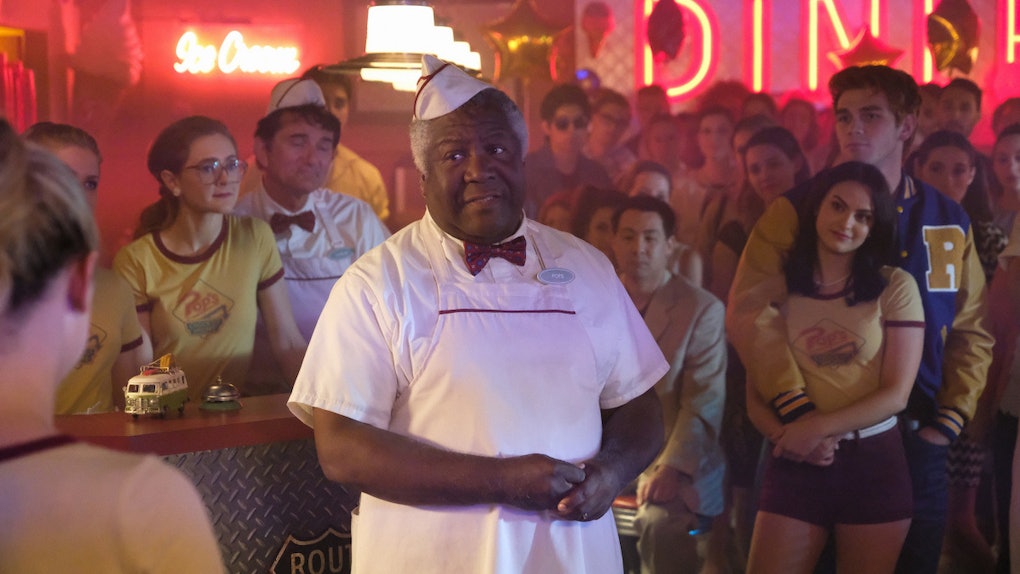 Where Is Pop’s Diner From ‘Riverdale’? You Can Officially Visit The Restaurant IRL

TV tourism is one of the byproducts of the Peak TV era. Cities in Spain and Norther Ireland offer the ability to visit Westeros on holiday. London and Scotland have visitor spots from Harry Potter filming. The UK National Trust gives regular tours of Highclere Castle where Downton Abbey was set. And now there's a place in Canada where you can visit Pop’s Diner from Riverdale and have a burger, fries and a milkshake.

Unlike say, Highclere Castle, which really was the place where all the episode of Downton Abbey was filmed, Rocko's Diner in British Columbia only stood in for Pop's Chock'Lit Shoppe for one episode: the pilot. But that doesn't make it any less a place for fans to check out next time they are thinking of a Canadian vacation.

Changing filming locations from the pilot episode to regular season filming is pretty normal, Game of Thrones, for instance, filmed in Morocco for the Essos scenes in their pilot, before moving first to Croatia for Seasons 1-4, and then slowly transferring their operations to Spain since Season 5. Riverdale decided after the pilot to build their own customized Pop's Chock'Lit Shoppe for filming, which stands in a parking lot on the filming lot in Vancouver.

But that's not really a place where tourists can go hang out, and it doesn't serve customers actual food either, except what the props department is serving up that day from the script. Rocko's, on the other hand, is a working diner that is happy to welcome customers anytime. Really anytime. It's a 24 hour joint.

Rocko's location is about an hour outside of Vancouver. That means it's a bit of a drive from town. (You can understand why Riverdale decided to build their own.) But it also means that it's been used several times by shows and movies that film in the area and need a diner for a one off scene. Harry Potter's own Daniel Radcliffe was there to film the movie Horns, and the Potter knock off Percy Jackson and the Lightning Thief also did scenes there.

But neither of those have quite the following of Riverdale, which has started to descend into full blown mania after Season 1 was put on Netflix over the summer so that teenagers everywhere would catch up on the first 13 episodes heading into Season 2.

That's probably why Rocko's has done an overhaul to the menu in order to cater to the Riverdale tourism crowd. They've changed the names of some of the milkshakes too. They include:

For those who are 19 and up there's boozy shakes as well. (Drinking age in Canada is 19, not 21.) Because who says Pops doesn't know how to party down a little now that Hiram Lodge owns the joint?

Because this is Jughead's hang out, they also have a variety of burgers, even if the show itself has been stingy in the famed Jones' eating habits. And for those who are not into burgers, and want to try Canadian dishes you can't find done properly in the states, there's always poutine*.

(*It's fries with gravy and melted cheese. Trust me, if you've never had poutine, you want to order it. You can thank me later.)

Rocko's is worth visiting even if you're not the biggest Archie fan in the world. It's the kind of historical artifact from an earlier time you might see featured on Diners Drive-Ins and Dives on Food Network. As one of the last free standing diners in British Columbia, Rocko's is still family owned, even after all these years. Even Betty's mom couldn't argue with that.

More like this
Who Did Emily Poison? 'The Handmaid's Tale' Season 2 Is Off To An Intense Start
By Ani Bundel
In 'Riverdale' Season 5, Toni Topaz Is The Black Superwoman Without A Cape
By Erika Hardison
Demi Lovato Called Out A Froyo Shop For Promoting Dieting Culture, & It's Getting Mixed Reactions
By Brandy Robidoux
Stay up to date